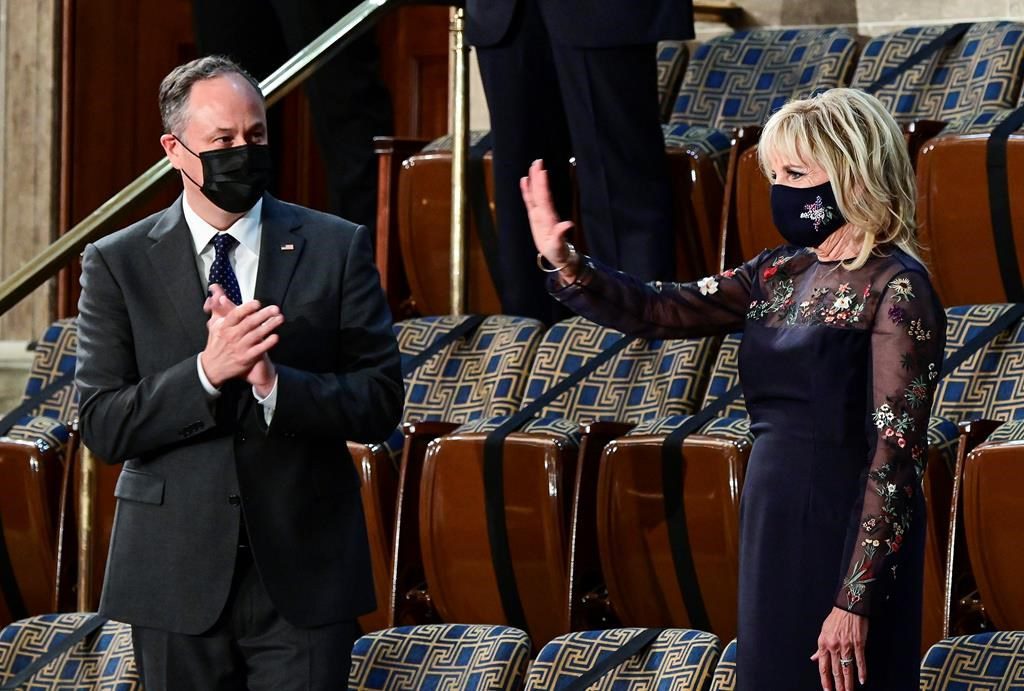 If he ever imagined that at all.

His drop-ins at places where people are rolling up their sleeves for a jab of protection have become a particular focus for Emhoff as he begins to shape his groundbreaking role as SGOTUS â€” the first "second gentleman of the United States."

It’s a sharp pivot from his past work as an entertainment lawyer.

"These shots, they work. They’re painless," Emhoff told Bishnu Subedi, a 28-year-old recent arrival to the U.S. from Nepal, who was getting her first Pfizer vaccine shot during his recent visit to Community Health Centers of Burlington in Vermont.

"I did it twice. It’s all good," said Emhoff, referring to the two Moderna vaccine doses that he and the vice-president received earlier this year.

Spouses of vice-presidents, all women until now, typically spend their time promoting the president’s policies and some of their own causes â€” and Emhoff is no exception.

He’s also helping promote other aspects of Biden’s $1.9 trillion virus and economic plan: touring food banks in Iowa and Nevada to highlight the administration’s response to a pandemic-driven increase in food insecurity and hunger nationwide.

He has also called attention to the financial struggles facing small businesses, dropping in on such establishments during his travels, and has advocated for making affordable, high-speed internet more widely available across the country.

Trips to promote Biden’s jobs and families plans are in the offing.

Emhoff, 56, was living a quite different life in southern California not long ago.

He was the divorced father of a son and daughter when he and Harris â€” then California’s attorney general â€” were set up by a friend in 2013. They married the following year.

Emhoff, who had built a career as a high-profile entertainment lawyer, resigned from the Los Angeles office of the DLA Piper law firm to focus on supporting his wife and on his historic role, approaching it as the start-up operation it essentially is.

"I am honoured to be the first male spouse of an American President or Vice-President," he tweeted Jan. 21, the Biden administration’s first full day. "But I'll always remember generations of women have served in this role before me â€” often without much accolade or acknowledgment. It's their legacy of progress I will build on as Second Gentleman."

It is a historic shift for politics and for political unions. For the first time, a man is taking on the more traditional spousal role of administration cheerleader â€” not policy maker â€” and supporter and confidant of the vice-president.

"This is going to offer an alternative vision of what it can mean to be a husband," said Cassandra Good, an assistant professor of history at Marymount University.

In another first for Emhoff, he is the first Jewish spouse of a president or a vice-president. He hosted the White House's virtual Passover celebration this year.

"I've learned teaching is really hard,” he confessed to reporters in March. “The amount of work that you have to put in and the extra effort, especially during COVID, doing (it) over Zoom."

He has said he’s taking advantage of the access he has to experts in the administration to learn about issues and isn’t just visiting museums and libraries, though he is a history buff who has toured the National Archives and delivered cupcakes to the White House librarians.

Emhoff isn’t shy about gushing over his wife during their public appearances. On more than one occasion he has said a version of this line: “One of my favourite things to do is to introduce my wife, Kamala Harris, vice-president of the United States."

"How often have we seen people in his position, people of some prominence, men, stepping back and not only pushing their wives forward, but just openly supporting her?" Gutin said.

Emhoff says he enjoys travelling the country, talking to people and then sharing what he learns with the vice-president over dinner.

At a virtual event last week with Interior Secretary Deb Haaland to announce new listings in the Underground Railroad Network to Freedom Program, Emhoff complimented Turkiya Lowe after she discussed what inspired her to become chief historian of the National Park Service. Lowe is the first woman and first African American to hold the position.

Emhoff noted parallels in Lowe’s and Harris’ career paths, including that both are graduates of Howard University, a historically Black institution. Harris has also been the first woman and woman of colour at many points in her career.

"She says the same thing all the time. 'I might be the first, I don't want to be the last,’" Emhoff told Lowe, quoting his wife. "And to hear your words and the way you spoke them, I can’t wait to tell her about that when I see her later tonight."