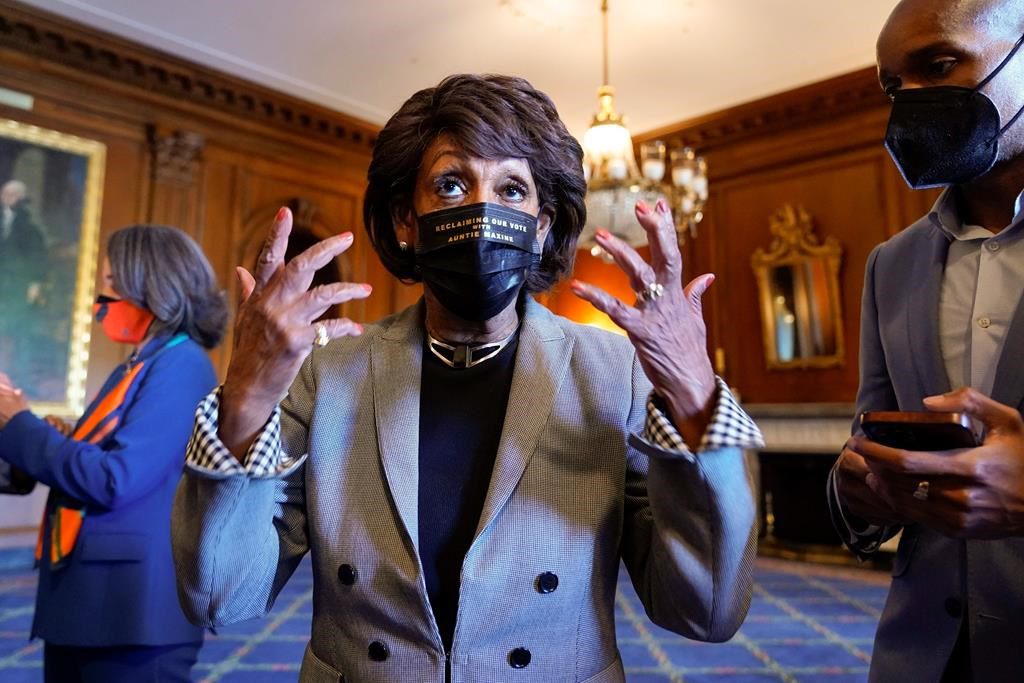 WASHINGTON â€” When Rep. Maxine Waters urged people to "stay on the street" in the pursuit of justice for George Floyd, advocates for racial equity and an end to police violence heard a leading Black voice in the nation’s long march toward civil rights.

But detractors, including the judge in the case against Derek Chauvin, criticized Waters' push for a guilty verdict as incendiary, momentarily diverting attention away from the white police officer accused in the death of Floyd, who was Black, and onto the words of the congresswoman. Chauvin was found guilty Tuesday of murder and manslaughter.

As the action and reaction ricocheted around social media, and on endless cable television loops as the jury deliberated, it was an all-too-familiar call and response, a politically fraught exchange that has played out throughout much of America’s troubled racial history.

"People are concentrating their fire on Maxine Waters in a moment where a police officer is on trial for murdering a man," said Leah Wright Rigueur, the Harry Truman professor of history at Brandeis University.

They’re calling for law and order, she said, "but the whole idea of what people are rebelling against â€” and historically have rebelled against â€” is the idea of law and order when it is applied unfairly and unjustly."

Waters, a Democrat from California, has long been a galvanizing figure, speaking boldly for racial justice in communities across the country and showing up, just as she did at the suburban Minneapolis police station ahead of jury deliberations in Chauvin’s trial.

Waters told the crowd Saturday night that she wanted to see a murder conviction against Chauvin for Floyd's death.

Chauvin's attorney swiftly moved for a mistrial in light of Waters' comments.

Judge Peter Cahill denied the defence motion Monday, but he called it "disrespectful to the rule of law and to the judicial branch" for elected officials to comment on the outcome of the case. “Abhorrent,” he said.

The term "Maxine Waters" skyrocketed on Facebook and Instagram after her comments, according to data from CrowdTangle, a Facebook-owned tool that tracks public insights on the social media platforms.

On Monday and Tuesday, as the jury deliberated, public Facebook posts naming the congresswoman received several million more total interactions than posts naming Chauvin. Posts about Waters also appeared frequently in Facebook discourse about the trial in general. In a public search Tuesday, videos shared by conservative commentators were among those with the most interactions.

Leading Republicans on Capitol Hill criticized Waters’ remarks, some taking to Fox News and social media themselves as debate churned. Some particularly criticized her call for confrontation.

The House Republican leader, Kevin McCarthy, introduced a resolution to censure Waters "for these dangerous comments." It failed to advance Tuesday on a party-line vote.

Senate Republican leader Mitch McConnell said, "It's harder to imagine anything more inappropriate than a member of Congress flying in from California to inform local leaders, not so subtly, that this defendant had better be found guilty."

GOP leaders fended off questions about their party’s own incendiary rhetoric, namely Donald Trump urging his supporters to "fight like hell” for his presidency before they stormed the Capitol in the deadly Jan. 6 riot to overturn Joe Biden’s election.

Democrats rose to defend Waters, with House Speaker Nancy Pelosi saying the comments should be viewed in the context of the long struggle toward civil rights.

"Maxine talked about confrontation in the manner of the civil rights movement," Pelosi told reporters Monday at the Capitol.

Asked if Waters should apologize, Pelosi said no.

At the White House, press secretary Jen Psaki said, "It's important to provide a space and an opportunity for peaceful protest. But protesting should be peaceful."

House Majority Leader Steny Hoyer, D-Md., said in a speech, "Chairwoman Waters' remarks reflect the very profound anger and sense of hopelessness that she and so many others, myself included, feel when we see African Americans being killed during encounters with our law enforcement and their families not seeing justice."

Rep. Hakeem Jeffries of New York, the Democratic Caucus chair, said that with House Republicans scrambling to tamp down a movement within their ranks to form a white-focused "Anglo-Saxon" caucus, the GOP leaders criticizing Waters should "sit this one out."

The comments Waters made do carry some legal risk in the former officer's trial. Public officials usually avoid speaking out about cases because their words are easy fodder for appealing a conviction â€” evidence of a possible effort to poison a jury pool and to determine guilt without a trial.

After the verdict Tuesday, Waters told reporters at the Capitol, "You know, someone said it better than me: I'm not celebrating, I'm relieved."

Known as "Auntie Maxine" on Capitol Hill, Waters has become a role model to a younger generation of leaders for her unswerving style in a decades long career focused on racial and economic justice.

With the deaths in recent years of Rep. John Lewis and other top Black leaders in Congress, Waters is a bridge to that earlier era of civil rights leadership.

"Auntie Maxine is not an easy target for anybody, and I commend her for her leadership,” said Rep. Adriano Espaillat, D-N.Y.

Waters began focusing on policing issues in 1979 after the police shooting of a Black woman during a confrontation in Los Angeles over an unpaid gas bill. Joining Congress in 1991, she swiftly became a leading advocate for policing changes after the videotaped beating of Rodney King by Los Angeles police officers.

"In some ways, this is exactly why we have representative government,” said professor Ravi Perry, chair of Howard University's political science department.

Rashad Robinson, president of the advocacy group Color of Change, dismissed the "manufactured outrage" of critics of Waters as a distraction.

"What are bus boycotts, what are the lunch counter sit-ins, if not people showing up?” he said. "And now people are acting outraged.”

Find AP's full coverage of the death of George Floyd at: https://apnews.com/hub/death-of-george-floyd