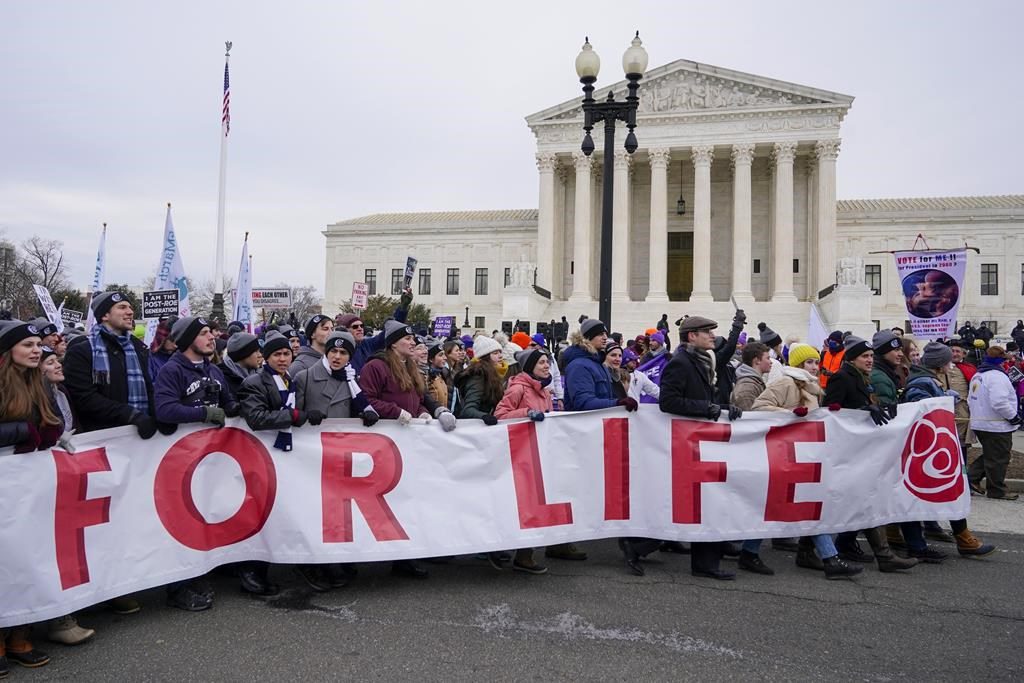 WASHINGTON (AP) — One year ago, the annual March for Life protest against legal abortion took place in Washington amid a mood of undisguised triumph. With a fresh conservative majority on the Supreme Court, thousands of marchers braved bitterly cold weather to celebrate the seemingly inevitable fall of Roe v. Wade.

Now, with the constitutional right to abortion no longer the rule of the land, the March for Life returns Friday with a new focus. Instead of concentrating their attention on the Supreme Court, the marchers plan to target the building directly across the street: the U.S. Capitol.

Movement leaders say they plan to warn Congress against making any attempt to curtail the multiple anti-abortion laws imposed last year in a dozen different states.

“This year will be a somber reminder of the millions of lives lost to abortion in the past 50 years, but also a celebration of how far we have come and where we as a movement need to focus our effort as we enter this new era in our quest to protect life,” Jeanne Mancini, president of March for Life Education and Defense Fund, said in a statement.

Some movement leaders also hope to plant seeds in Congress for a potential federal abortion restriction down the line. Marjorie Dannenfelser, president of SBA Pro-Life America, said she envisions an eventual “federal minimum standard” cut-off line such as 13 weeks of pregnancy after which abortion would not be permitted in any state. Dannenfelser’s scenario would still leave individual states free to impose their own, stricter measures, including a total ban.

That last ambition is an admitted longshot since even if it passes the newly Republican-controlled House of Representatives, it would most likely fail in the Democratic-held Senate.

“We know it’s not going to happen this session, but this is the beginning,” Dannenfelser said. “It’s (Congress’) responsibility to listen to the will of the people.”

In permit applications to the National Park Service, protest organizers estimated 50,000 participants this year, about the same size as previous marches.

In the absence of Roe v. Wade’s federal protections, abortion rights have become a state-by-state patchwork.

Elective abortions also are unavailable in Wisconsin, due to legal uncertainties faced by abortion clinics, and in North Dakota, where the lone clinic relocated to Minnesota.

Bans passed by lawmakers in Ohio, Indiana and Wyoming have been blocked by state courts while legal challenges are pending. And in South Carolina, the state Supreme Court on Jan. 5 struck down a ban on abortion after six weeks, ruling the restriction violates a state constitutional right to privacy.

President Joe Biden’s administration has limited options in the wake of the Supreme Court decision. Vice President Kamala Harris is scheduled to give a speech in Florida on Sunday, the 50th anniversary of the original Roe v. Wade ruling, to emphasize that abortion rights remain a core focus for the administration.

“The vice president will make very clear: The fight to secure women’s fundamental right to reproductive health care is far from over,” said a statement from Kirsten Allen, a Harris spokesperson. “She will lay out the consequences of extremist attacks on reproductive freedom in states across our country and underscore the need for Congress to codify Roe.”

According to an Associated Press-NORC Center for Public Affairs Research poll conducted in July, 53% of U.S. adults said they disapproved of the Supreme Court’s repeal of Roe, while 30% approved.

Dannenfelser disputes those numbers and says that while blanket abortion bans are a divisive issue among voters, limited restrictions such as a ban after the first trimester of pregnancy are “wildly popular” in both red and blue states.

Anti-abortion activists also have their eye on the upcoming 2024 presidential elections and are essentially vetting prospective candidates over their views on the issue. Dannenfelser said she met recently with Florida Gov. Ron DeSantis, a potential leading Republican candidate, and came away “incredibly impressed,” but said it was still too early for her organization to endorse anyone.

She predicted that there will be some “fault lines” among Republican presidential contenders over abortion rights and protections, but warned that any candidate perceived as being soft on the issue will have “disqualified him or herself as a presidential candidate in our eyes, and having done so has very little chance of winning the nomination.”