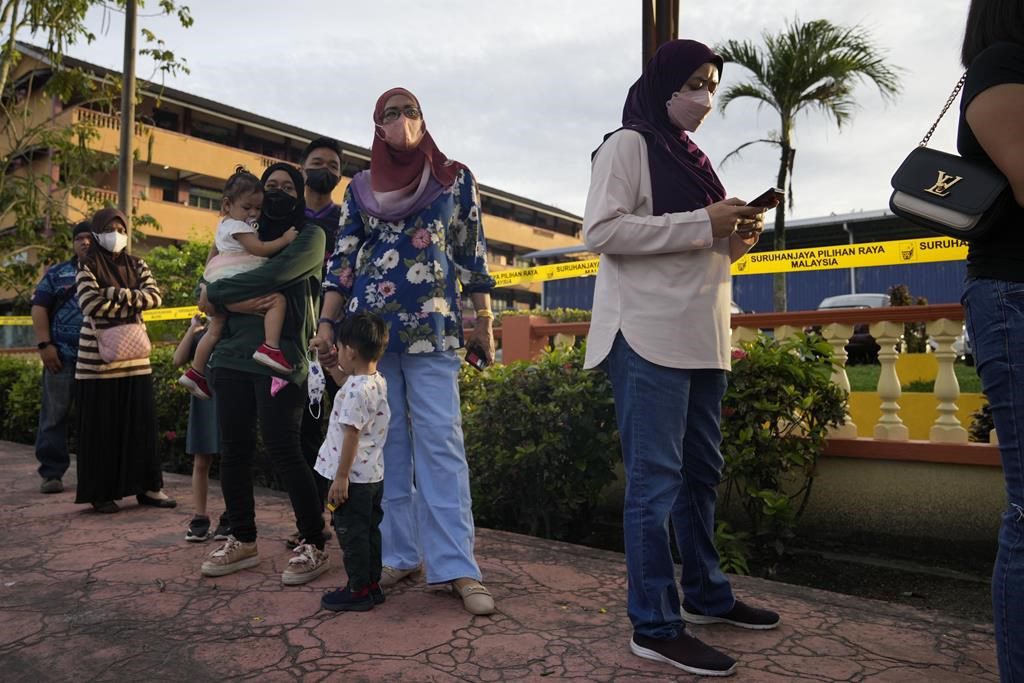 KUALA LUMPUR, Malaysia (AP) — Malaysians began casting ballots Saturday in a tightly contested national election that will determine whether the country’s longest-ruling coalition can make a comeback after its electoral defeat four years ago.

Political reformers under opposition leader Anwar Ibrahim are gunning for a second victory — but with three main blocs vying for votes, analysts said the outcome is hard to predict and could lead to new alliances if there is a hung Parliament.

Polling booths opened at 7:30 a.m. (2330 GMT) in two states on Borneo island, and half an hour later on the Malaysian Peninsula. Long lines had already formed in the capital Kuala Lumpur and other cities as voters rushed to cast ballots ahead of afternoon thunderstorms predicted in parts of the country.

More than 21 million Malaysians are eligible to cast ballots to fill 222 seats in federal Parliament and choose representatives in three state legislatures. The Election Commission has extended voting time from nine to 10 hours, with results expected to be out late in the day.

The main battle is between the United Malays National Organization-led alliance and Anwar’s Pakatan Harapan, or Alliance of Hope. The Perikatan Nasional, or National Alliance, which is a Malay-based bloc led by former Prime Minister Muhyiddin Yassin, is seen as a dark horse. Many polls have put Anwar’s bloc in the lead, but short of winning a majority. But two research houses have predicted a win for the UMNO-led Barisan Nasional, or National Front alliance.

Apathy among voters worried about the economy and rising costs of living and the addition of some 6 million mostly young voters since 2018 polls are adding to uncertainties in the tight race. The prospect of flash floods due to seasonal monsoon rains may also affect voters’ turnout.

“The choice today is between sticking with the status quo … or opting for a different future, with the hope that Harapan will improve lives,” said Bridget Welsh, a Southeast Asian political expert.

Anwar’s bloc emerged the strongest in the race but it is unclear if this will translate into a victory given Malaysia’s gerrymandering and uneven proportion of voters in constituencies, she said. UMNO had lost the popular vote in past elections but still won a majority in Parliament due to a skewed electoral system that gives power to rural Malays, its traditional supporters.

Once an omnipotent force credited with developing and modernizing Malaysia, anger over government corruption led to UMNO’s shocking defeat in 2018 polls to Anwar’s bloc that saw the first regime change since Malaysia’s independence from Britain in 1957.

The watershed polls had sparked hopes of reforms as once-powerful UMNO leaders were jailed or hauled to court for graft. But political guile and defections led to the government’s collapse after 22 months. UMNO bounced back as part of a new government but infighting led to continuous political turmoil. In all, Malaysia’s had three prime ministers since 2018 polls.

Initially confident of a strong comeback due to a fragmented opposition, UMNO President Ahmad Zahid Hamidi had pushed incumbent caretaker Prime Minister Ismail Sabri Yaakob to call snap polls. But the UMNO campaign has been relatively muted as infighting and corruption charges against Zahid cast a shadow over its election promise for stability and prosperity.

The opposition has warned that a UMNO victory would result in Zahid, who is fighting dozens of graft charges, taking over as prime minister and escaping the corruption allegations. Zahid has dropped eight party leaders aligned to Ismail from the polls, but he and UMNO leaders insist Ismail remains the party’s candidate.

Anwar, 75, has put up a strong fight as he crisscrossed the country, often drawing large crowds with his message for change and his oratory skills. Thousands of people chanted his battle cry of “We Can” at his final rally late Friday as Anwar urged them not to let corrupt leaders dictate the country’s future.

A second victory at the ballot box would cap Anwar’s storied political journey, a former deputy prime minister whose sacking and imprisonment in the 1990s led to massive street protests and a reform movement that saw his bloc rise into a major political force.

Anwar was in prison during the 2018 vote for a sodomy charge that critics say was trumped up. Former Prime Minister Mahathir Mohamad led the alliance’s campaign and became the world’s oldest leader at 92 after the victory. Anwar was pardoned shortly after and would have succeeded Mahathir had their government not crumbled.

The stakes are high for Anwar, who is contesting a new federal seat in Tambun in northern Perak state in a calculated gamble to showcase his alliance’s strength. His bloc has promised a reset in government policies to focus on merits and needs, rather than race, and good governance to plug billions of dollars it said was lost to corruption. Critics say the affirmative action policy that gives majority Malays privileges in business, housing and education has been abused to enrich the elites, alienate minority groups and has sparked a brain drain.

But this has been a sore point with rural Malays, who have been constantly warned by UMNO of the risk of Chinese economic domination if the opposition won. Anwar’s alliance includes a Chinese-majority party that has long been used as the bogeyman by UMNO. Malays form two-thirds of Malaysia’s 33 million people, which include large minorities of ethnic Chinese and Indians.

The National Alliance, UMNO’s ally-turned rival, ran a sleek campaign to woo Malay supporters uncomfortable with corruption in UMNO and greater pluralism espoused by Anwar. Its leader Muhyiddin defected from Mahathir’s government in early 2020, causing its collapse. He became prime minister under a tieup with UMNO but resigned after 17 months due to infighting. Anwar’s supporters have accused Muhyiddin and leaders of his Islamic ally of hate speech against ethnic minority groups in their bid to win Malay votes.

Mahathir, 97, is also seeking support under a new Malay movement that isn’t expected to make much headway but may split the vote. His popularity has faded and the elections are likely to be the last for Mahathir.