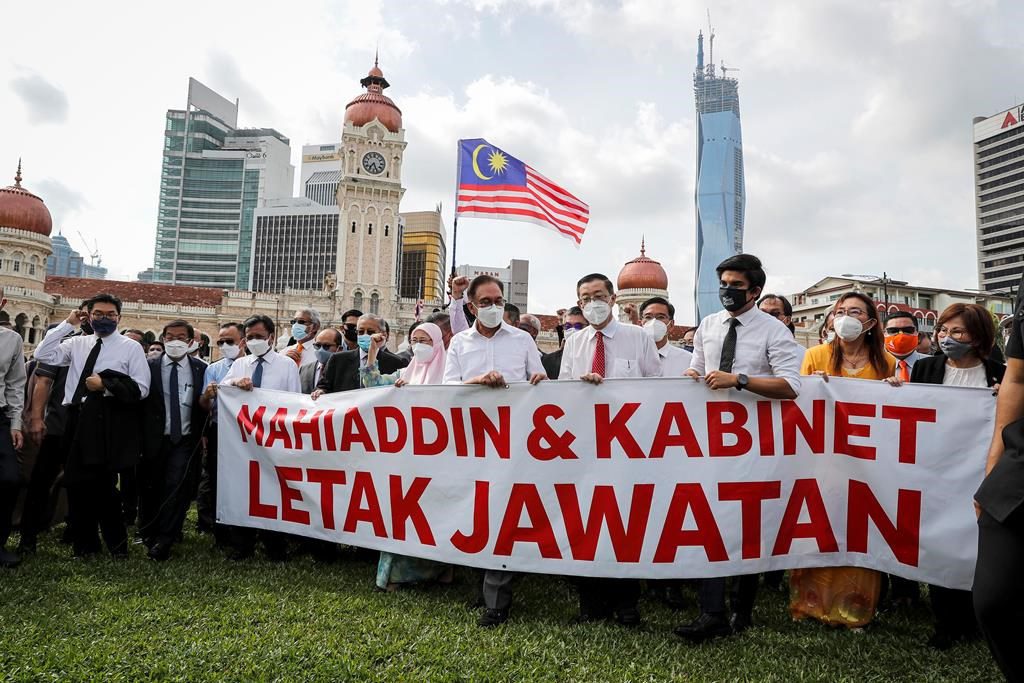 KUALA LUMPUR, Malaysia (AP) — Police blocked opposition lawmakers from marching Monday to protest a two-week lockdown of Malaysia’s Parliament, which they consider another ploy for the embattled prime minister to dodge a no-confidence vote.

With the crucial parliamentary session due, Prime Minister Muhyiddin Yassin instead postponed it and Parliament will be shut for two weeks. The health ministry said Parliament was deemed a high-risk venue because four of 11 COVID-19 cases detected among staff and others were suspected to be the fast-spreading delta variant.

Muhyiddin has led an unstable, unelected governing alliance since March 2020 after he initiated the downfall of the reformist government that won the 2018 elections. Parliament has been suspended for much of that time due to the pandemic and hasn’t acted on the no-confidence motion filed by opposition lawmakers.

They questioned the timing of the announcement of Parliament’s closure, which came after the king rebuked Muhyiddin’s government for misleading Parliament on the status of ordinances it issued during the seven-month coronavirus state of emergency.

Dozens of lawmakers gathered near Parliament on Monday held a banner calling for the resignation of Muhyiddin and his Cabinet. They slammed the government over its cowardice and said they must eventually face the people.

“This government has failed to carry out its duties but is continuing to cling to power,” said opposition leader Anwar Ibrahim. Apart from mismanaging the pandemic, he said Muhyiddin has also abused his power to bypass Parliament and the king in withdrawing the emergency ordinances.

Former Prime Minister Mahathir Mohamad called for the resignation of the entire Cabinet. “Only through this way, this prolonged political turmoil can end and focus can be fully given to efforts to resolve the health, economic and social crises that has plagued the country for more than 17 months,” Mahathir said in a statement.

The lawmakers dispersed peacefully, as a water-cannon truck and riot police armed with shields and batons shut off the road heading to Parliament.

Last week’s sitting of Parliament was the first of the year and was held after Muhyiddin caved to pressure from the king, but debates were banned in the session held only to brief lawmakers on the pandemic and related issues.

King Sultan Abdullah Sultan Abdullah said on Thursday he did not give his consent to annul emergency ordinances but told the government to debate them in Parliament. Muhyiddin said that the king has to act on the Cabinet’s advice and insisted his administration didn’t violate the constitution.

Any debate in Parliament could test Muhyiddin’s support with his alliance holding a razor-thin majority.

Public anger has built up against the government as Malaysia’s COVID-19 cases this year jumped eightfold to more than 1.1 million. New daily infections breached 10,000 on July 13 for the first time and have stayed there since. Total deaths have risen to above 9,000.

Nearly 20% of the population has been fully vaccinated.