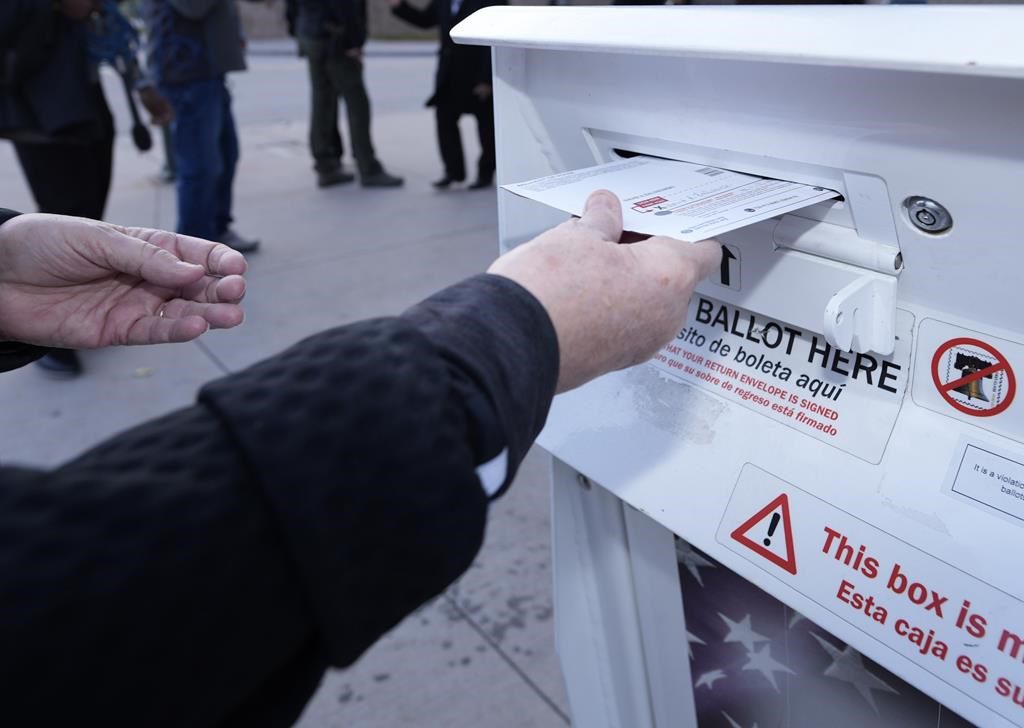 ATLANTA (AP) — Four days after Election Day, with a bitter, high-profile race for Arizona governor still up in the air, Ohio’s secretary of state broke an unspoken protocol among top election officials.

“Dear Arizona, need some advice on how to run an election the right way?” Frank LaRose, a Republican, chided his counterparts on Twitter. “Your process is obviously not working.”

Though not as fast as most would like, the process actually was working as designed and as it has for years in a state where the vast majority of voters cast mailed ballots. What’s different is that many of the races were so close that winners couldn’t be quickly determined, a frustration that has become more common as Arizona has evolved into one of the nation’s most hotly contested political battlegrounds.

The governor’s race eventually was called for the Democrat, Katie Hobbs, four days after LaRose sent his social media blast — with about 17,000 votes separating the candidates out of more than 2.5 million cast.

Arizona isn’t the only state where votes were still being counted a week later. Even in Ohio, where the margins for Republican candidates were wide enough for all top races to be called on election night, counties were still tallying late-arriving mailed, military and overseas ballots nearly a week after Election Day. One state legislative race had yet to be called.

In California, where voting by mail has greatly expanded, five U.S. House races had remained uncalled. The state’s vote counting process has been in the spotlight this week because California’s congressional districts had become pivotal for determining which party would control the House. The call for Republicans finally came late Wednesday after enough results had been released in a Los Angeles County seat.

Lengthy vote counts can frustrate candidates and their supporters, but they don’t indicate anything is wrong with the voting or the tallying of ballots. Counting even in races where a winner can be called on election night doesn’t stop until every eligible ballot has been verified and counted, and that takes time — sometimes a few days or even a week or more.

Many states allow mail ballots to be counted as long as they are postmarked by Election Day and received within a set period of time. Those ballots then have to be verified and counted.

Also in many states, voters who return mail ballots with technical problems have a certain number of days for them to fixed. In Georgia’s Bartow County, the last ballots were counted late Monday afternoon, about 30 minutes before local officials certified the election.

“A lot of the important work we do for elections happens after Election Day,” said Joseph Kirk, the county’s election supervisor.

A week after the election, officials across the country were still counting ballots cast by military personnel or Americans who are overseas, as well as ballots that were cast provisionally when there were questions about eligibility.

Voters in each of those states are automatically mailed a ballot each election. It’s the same in Colorado, where election officials say the state’s vote-by-mail system, developed by both major parties, is working as it has in the past. Attention to the vote count process comes up only when there’s a high-profile race that is exceptionally close, as there is this year with Republican Rep. Lauren Boebert’s reelection bid in the 3rd Congressional District — still uncalled on Thursday.

Some have seized on the ballot counting process in Arizona’s Maricopa County, by far the state’s most populous, to question the integrity of the election. Supporters of Kari Lake, the Republican candidate for governor, have said it’s suspicious that it took days to count ballots. Lake has criticized Election Day’s transformation into what she calls “Election Week” and has not conceded the race.

Former President Donald Trump said in a social media post, “I assume everyone is watching Arizona as the great Kari Lake’s easy election win is slowly, yet systematically, being drained away from her, and from the American people.”

Some criticism is based on a misunderstanding of the process. Vote totals change as more ballots are counted, and that can mean one candidate pulls ahead of the other.

Ohio Republican LaRose said in an interview after his tweet that he favors his state’s process, in which the state releases results only on election night and then a second time after all ballots have been processed. He said releasing results incrementally, as Arizona does, can promote “wild conspiracy theories” and puts pressure on election workers.

Contributing to the challenges in Maricopa County was a massive influx of mail ballots dropped off on Election Day. Ahead of the election, conservative activists who falsely believe the 2020 election was stolen from Trump had urged supporters not to vote until the last minute or to turn in their mail ballots as late as possible as a way of preventing — in their view — Democrats from rigging the election.

There is no evidence of any widespread fraud or manipulation of voting machines in the 2020 election or this year’s. Jen Easterly, director of the U.S. Cybersecurity and Infrastructure Security Agency, said there are no signs that voting systems changed or deleted votes, or were compromised in any way.

Mail ballots take longer to count because of the numerous verification steps built into the process to guard against potential fraud. These include matching ballots to the voter registration database and verifying signature or identification information.

“You can’t discount the impact that having to process mail ballots has had,” said Jennifer Morrell, a former local election official in Utah and Colorado who now advises federal and state officials on election administration and security. “All those things take time to do it right.”

Utah is the only Republican-led state to mail ballots to all active voters. The vote by-mail system has been implemented gradually over the past decade, and voters are overwhelmingly supportive, even though counting in close races can take weeks. In 2020, 92% of the state’s electorate used mail ballots.

This year, Republicans won Utah statewide races by convincing margins, but the outcome in one congressional district has in some years been decided by a percentage point or less. That meant the winner was not determined for several weeks, and yet the wait did not generate complaints from members of either party, said former U.S. Rep. Ben McAdams, who lost reelection to the seat in 2020.

“It’s unfortunate when people really are selective in their complaints about elections,” he said, comparing voting by mail in Utah to other states. “Nationally, it seems like it is disingenuous. You have to wonder what their motives are when they find problems in races where they lose, but see no problems in the races that they win.”

Utah, a state that voted for Trump twice, still had 8% of its estimated ballots yet to count as of Tuesday. Simply because the counting continues long after Election Day is no reason for alarm, said Ryan Cowley, Utah’s director of elections.

He said tens of thousands voters waited until Election Day to submit their mail ballots.

Christina A. Cassidy And Julie Carr Smyth, The Associated Press