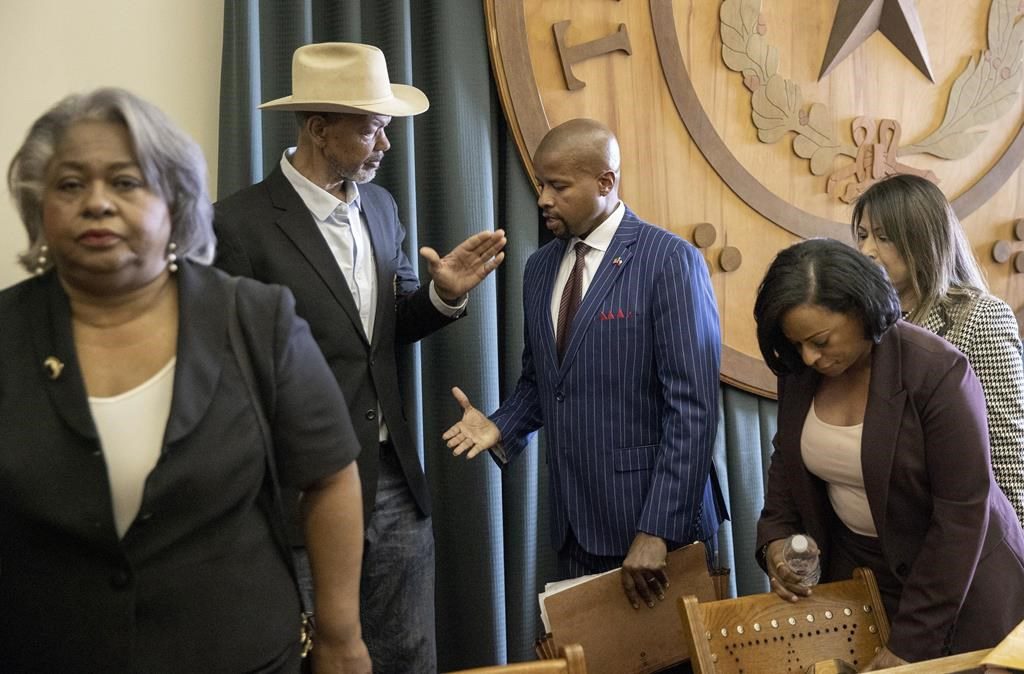 AUSTIN, Texas (AP) — Midnight was coming fast. Any moment now, the Texas House of Representatives would sign off on one of the most restrictive voting laws in America.

It was 10:35 p.m. Suddenly, every Democrat still on the floor got a text message.

“Members, take your key and leave the chamber discreetly. Do not go to the gallery. Leave the building.”

The walkout was a go, and minutes later, Senate Bill 7 was dead. Left without enough House members to conduct business under the rules before a midnight deadline Sunday, Texas Republicans were forced to abandon for now an elections overhaul they had crammed with previously unseen restrictions during closed-door negotiations, including one prohibiting Sunday morning early voting — a time widely used by Black churchgoers in “souls to the polls” campaigns.

It was a dramatic, last-ditch revolt: One by one, Democrats headed for the exits and disappeared down corridors. The voting machines on their abandoned desks were locked. In the unlikely event of a “call of the House” — an extreme remedy to secure a quorum, mobilizing state troopers to forcibly bring absent members back — Democrats chose a hideout that was unmistakable in meaning: Mt. Zion Baptist Church, a Black house of worship more than 2 miles (3.22 kilometers) away.

The rebellion gave Democrats and voting rights allies nationwide a morale-raising moment after months of racking up losses in GOP-controlled statehouses, where Republicans have rushed to enact a wave of strict voting laws in response to former President Donald Trump’s false claims that the 2020 election was stolen from him.

But the walkout in Texas is likely only a fleeting victory: Republican Gov. Greg Abbott, who had declared new voting laws a priority in Texas, barely waited for every Democrat to flee the House floor before declaring that he would order a special session to finish the job. And he’s already begun punishing lawmakers, saying Monday that he would veto the part of the state budget that funds legislators’ salaries.

‘”No pay for those who abandon their responsibilities,” Abbott tweeted.

He has not said when he will drag lawmakers back to work.

“I understand why they were doing it,” said Republican state Rep. Briscoe Cain, who carried the bill in the House. “But we all took an oath to Texans that we would be here to do our jobs.”

Coming in at 67 pages long, the Texas bill would have reduced polling hours, empowered poll watchers and scaled back ways to vote. It included a ban on drive-thru voting centers and 24-hour polling places, both of which were used last year around Houston, reflecting how Republicans went after Texas’ largest Democratic stronghold.

Many were ideas that Democrats had spent months fighting, but they protested that others were snuck in at the last minute. That included not just new early voting for Sunday but also a provision that could make it easier to overturn an election. Under the bill, a judge could void a candidate’s victory if the number of fraudulent votes cast could change the outcome, regardless of whether it was proved that the fraud actually had affected the result.

It’s the sort of provision that could allow a favorable judge to side with a candidate who makes broad claims of fraud with little specific evidence — as Trump did with virtually no success. Democrats and voting groups were particularly alarmed about it because the GOP has continued to embrace Trump even after he tried to overturn the 2020 election on phony claims of extensive fraud.

Hours before the vote was set to take place Sunday, Democrats packed into a back room with Republican House Speaker Dade Phelan.

“We weren’t getting satisfactory answers about why the bill had gotten so much worse,” Democratic state Rep. Gina Hinojosa said. “Most of us walked away from that meeting understanding that this was our only option.”

But even before then, Hinojosa said, momentum toward a walkout was building. She said a meeting of Black and Hispanic lawmakers in the House made clear there was “an anger, a sadness, an intolerance” about letting the bill pass. Another option was running out the clock but that carried more risk: Hinojosa said Democrats received word that any effort to filibuster the bill would lead to Republicans cutting off debate and holding a vote.

It was the first time in nearly 20 years that Democrats had staged a quorum break in Texas.

The meltdown of the Texas bill was a rare victory for Democrats in a year that has seen 14 states enact new laws tightening voting restrictions, according to the Brennan Center for Justice, a voting rights group. These laws have typically been muscled through by Republican-controlled state legislatures and signed swiftly by GOP governors. The Democrats’ potential remedy to the wave of restrictions — a sweeping national voting bill — is bogged down in Congress.

“We’ve been getting example after example in Republican state legislatures, and this is the culmination in terms of its raw racism and cutting back of the ability for brown and Black voters to vote,” said Fred Wertheimer, founder of the voting rights group Democracy 21. “The way they’re fighting in Texas tells a story of just how bad this legislation is and how Democrats are prepared to do everything they can conceive of to stop this legislation from happening.”

Democrats and voting rights groups also hope that Texas gives a shot in the arm to the bill in Congress, known as the For the People Act or HR1. The measure has been stalled in the Senate because some Democrats are not willing to end the filibuster. Senate Majority Leader Chuck Schumer has scheduled debate on the bill to begin in late June in hopes of breaking the impasse, and activists hope the boldness of Texas Democrats in using quorum rules to block legislation will push their DC counterparts to eliminate such rules in the U.S. Senate.

At the least, Democrats hope the walkout bought them some time. When they left the church, it was after midnight.

“We may have won the war tonight but the battle is not over,” Democratic state Rep. Nicole Collier said.