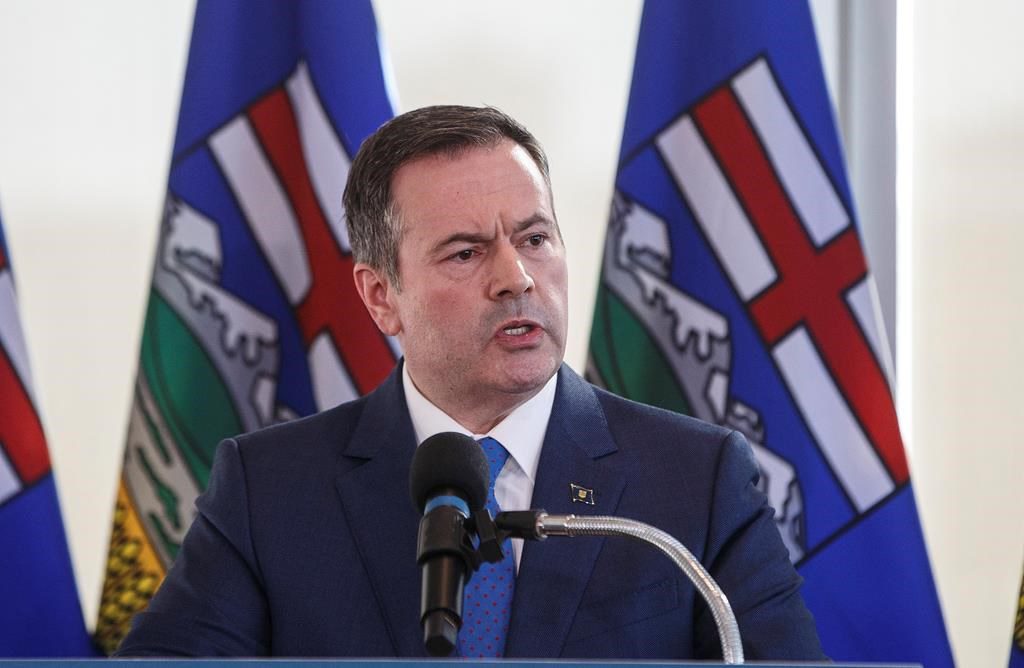 EDMONTON — A western Canadian Indigenous leader is condemning cancel culture remarks made by Alberta Premier Jason Kenney, and says it reinforces a recent decision to scrap a formal working agreement with the province.

Kenney spoke Tuesday about cancel culture when asked about Calgary Board of Education trustees voting this week to immediately rename the Langevin junior high school in light of outrage following the discovery of the remains believed to be from 215 children at the site of a former Indian residential school in Kamloops.

Hector-Louis Langevin, a former federal Conservative cabinet minister, is considered an architect of the residential school system, which saw thousands of Indigenous children taken from their families over decades, isolated and abused in a program designed to assimilate them into non-Indigenous culture.

Kenney was asked by reporters about the Langevin issue and the ongoing national debate over retaining or removing statues of Sir John A. Macdonald, Canada’s first prime minister, who was the driving force behind the residential school system.

Kenney equated removing statues and renaming institutions with erasing from history these figures and thereby not allowing Canadians to understand, learn and grow from past actions, even those deemed reprehensible.

The premier took issue with the focus on Macdonald, noting other federal leaders throughout Canadian history embraced racist and punitive policies, such as the internment of Japanese Canadians during the Second World War.

“If we go full force into cancel culture, then we’re cancelling most if not all of our history,” said Kenney. “Instead, I think we should learn from our history.”

Grand Chief Vernon Watchmaker was critical of Kenney’s remarks in a statement Wednesday.

“The premier’s diatribe was particularly insensitive, especially on the heels of the mass grave discovery in Kamloops, B.C.,” he said.

The statement added: “Just when we think we are experiencing acts of reconciliation, the premier contradicts all the efforts toward an understanding.

“(It) confirms that the Treaty 6 chiefs made the right decision to dissolve the protocol agreement that was made between the Confederacy of Treaty 6 First Nations and the Government of Alberta.”

The confederacy represents 50 First Nations across the Prairies. It signed a protocol with Alberta last December to work together on a range of shared concerns, including health, lands and resources, and education.

However, the confederacy said it sent a letter to Kenney two weeks ago formally dissolving that agreement citing “the province has been making unilateral decisions without consulting the First Nations.”

The letter did not elaborate and Watchmaker could not be immediately reached for comment.

Indigenous Relations Minister Rick Wilson also could not be reached for comment.

“It’s clear from Grand Chief Watchmaker’s statement that the Kenney government has failed to work collaboratively with Treaty 6 First Nations for some time,” he said.

“The premier’s recent remarks were profoundly harmful. While Albertans are confronting the horror of a mass grave filled with the remains of hundreds of Indigenous children, the premier felt that was the moment for him to defend one the central figures in the residential school system.”

Kenney reiterated those remarks Wednesday in an exchange with Feehan during question period.

“We can all join together in the condemnation of the great moral evil of the Indian residential school system,” Kenney said.

“At the same time, I don’t think that recognizing that evil requires that we remove from our history many of the central figures of Canadian history.”

Kenney has been an ardent defender of Macdonald’s legacy, but has staunchly condemned the residential school system.

As a federal cabinet minister, Kenney co-sponsored a bill to honour Macdonald. As premier, he said last year he’d be open to the Alberta legislature taking a Macdonald statue that protesters had toppled in Montreal.

This week Alberta, announced it will fund research into the undocumented deaths and burials of Indigenous children.