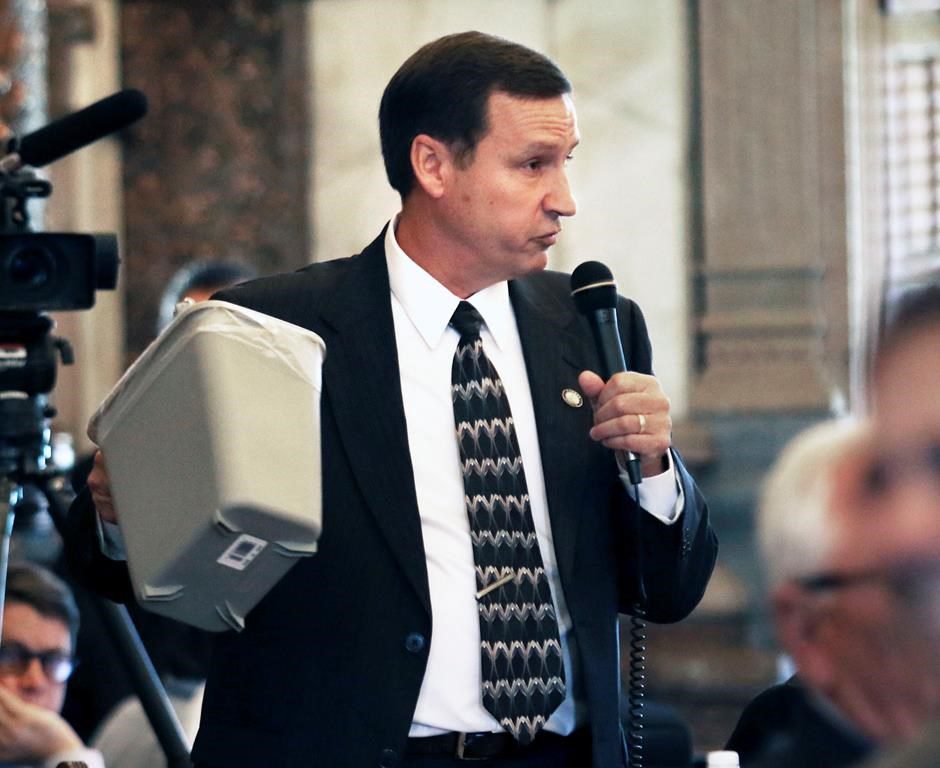 TOPEKA, Kan. (AP) — A state senator many Republicans see as the spoiler in the Kansas governor’s race has a long history of irritating GOP leaders, once even daring colleagues to smell a jar of catfish stink bait he’d brought to a tax debate.

More recently during a redistricting fight, Dennis Pyle compared the Senate president to Gollum, the troll-like character obsessed with a ring of power in “The Lord of the Rings” saga.

Now top Republicans are blaming Pyle for Democratic Gov. Laura Kelly’s narrow reelection victory after he left the GOP, ran for governor as an independent and siphoned votes away from Republican nominee Derek Schmidt. Pyle already had lost his committee assignments because of his conflicts with top Republicans, and GOP leaders began punishing dozens of his supporters within the party the day after the Nov. 8 election.

The state party’s Loyalty Committee — charged with enforcing a ban on supporting non-Republicans — this week stripped about 40 Republicans of decision-making positions, such as local voting-precinct committee spots, for backing Pyle, including people who signed petitions to get him on the ballot.

“They want to go after people that exercised their freedom just to give the people the choice — a conservative choice — on the ballot,” Pyle said.

Pyle says he ran for governor to give voters a true conservative alternative to both Kelly and Schmidt, the state’s three-term attorney general. But Republican leaders are casting Pyle’s bid as a vanity or revenge project following years of conflict with top legislative Republicans who backed Schmidt.

Pyle argues Schmidt was a weak candidate posing as a conservative, too close to Kelly for many GOP voters.

As for Republican leaders, Pyle said, “Why are they not assuming responsibility for their own failures?”

Prominent Republicans were galled because Democrats and abortion rights supporters also gathered signatures for Pyle. Then, in October, a Democratic group outside Kansas used texts, mailings and radio ads to market Pyle to Republicans as the race’s true conservative.

“We had to spend time educating people that Dennis Pyle had no path to victory,” he said. “I don’t think Laura Kelley could have won without that.”

Pyle, a 61-year-old farmer from the state’s northeastern corner, has served in the Legislature for two decades and been an aggressive advocate of abortion restrictions, tax and spending cuts and state laws targeting illegal immigration. He also has regularly wrangled with the Senate’s top Republicans, conservative or not.

A supporter’s video lauded Pyle in song as a principled “man on fire,” but days after the most recent election, the state’s most influential anti-abortion group called him a “selfish grandstander” in an email to its supporters.

Earlier this year, when Republicans overrode Kelly’s veto of their congressional redistricting map, Senate President Ty Masterson needed two tries in his chamber because Pyle and two other conservative senators held out in a dispute that also involved COVID-19 legislation. Pyle objected to how GOP leaders’ map divided his area between two congressional districts, splitting a county.

The other two lawmakers switched to “yes” on the second vote, but Pyle still abstained. Masterson stripped all three of most of their committee assignments. Pyle was left with only one, and Senate rules forced him to give it up when he left the GOP in June.

Republicans wanted to preserve the income tax cuts — something that would prove largely futile — by hiking other taxes. Pyle argued that the idea stunk like the garlic-flavored catfish food he’d brought to the Senate. He dropped a jar of it into a plastic trash normally kept under his desk and waved the trash can at senators, daring them to open the jar and smell its contents.

“That’s where that tax increase is right now,” Pyle said. “It’s right beside that stink bait.”