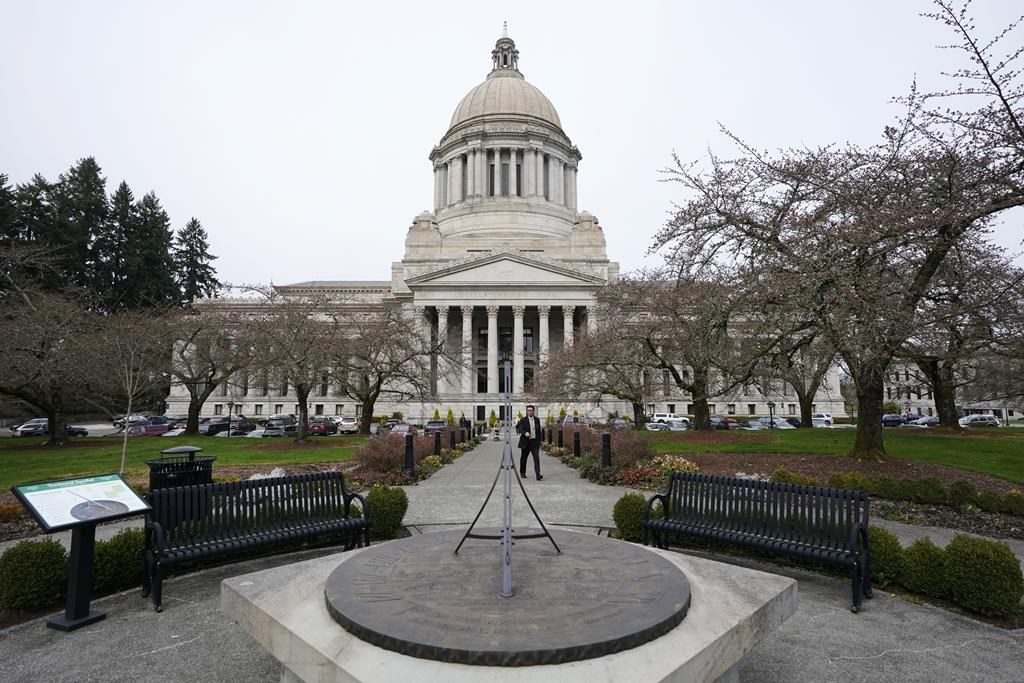 SEATTLE (AP) — An effort to balance what is considered the nation’s most regressive state tax code comes before the Washington Supreme Court on Thursday, in a case that could overturn a prohibition on income taxes that dates to the 1930s.

Washington is one of nine states without an income tax, and its heavy reliance on sales and fuel taxes to pay for schools, roads and other public expenses falls disproportionately on low-income residents.

They pay at least six times more in taxes as a percentage of household income than the wealthiest residents do, according to lawmakers, and middle-income residents pay two to four times as much.

Democrats in Olympia, led by Gov. Jay Inslee, sought to begin addressing that in 2021, when they enacted a 7% capital gains tax on the sale of stocks, bonds and other high-end assets, with exemptions for the first $250,000 each year and for gains from sales of retirement accounts, real estate and certain small businesses.

It was expected to be paid by 7,000 people — fewer than 1 in every 1,000 residents — and to bring in close to a half-billion dollars a year to help pay for public education in Washington, beginning this year. But it faces a legal challenge from wealthy residents and business and agricultural organizations, who say it violates the state and federal constitutions and makes for bad policy to boot.

“Washington’s unique, unprecedented and unconstitutional tax on capital gains will discourage our state’s resident entrepreneurs and investors from investing in new and expanded businesses in our state,” the Building Industry Association of Washington and Washington Retail Association wrote in a friend-of-the-court brief. “It will also cause significant numbers of individual business owners to leave Washington to avoid the new tax.”

Among the key issues being argued before the justices on Thursday is whether the new tax is, as the state insists, an excise tax — broadly defined as a tax on certain goods, services or activities — or an income tax, which the court long ago held unconstitutional in Washington.

Voters overwhelmingly passed a graduated income tax in 1932. But in a 5-4 decision the following year, the state Supreme Court struck it down, ruling that a tax on income was a tax on property — and the state Constitution says property taxes must be uniform and limited to 1% per year.

Last year, Douglas County Superior Court Judge Brian Huber in central Washington sided with those challenging the capital gains tax as a forbidden income tax. State Attorney General Bob Ferguson appealed, saying Huber got it wrong because the tax is not on property — it’s on what an owner does with that property by selling it.

In another friend-of-the-court brief, the Edmonds School District and Washington Education Association said it agreed with the state that the capital gains tax is an excise tax. But, they said, if the justices disagree and find that it is an income tax, then they should overturn their nearly century-old holding that an income tax is a tax on property.

Unlike property, income isn’t something that is owned and can be sold, their lawyers wrote: “This Court’s cases holding that an income tax is a property tax were wrong when decided and they are wrong now.”

The arguments come as progressives are making a push in several states to have the rich pay more in taxes. Bills announced this month in California, New York, Illinois, Hawaii, Maryland, Minnesota, Washington and Connecticut all revolve around the idea that the richest Americans need to pay more. But the proposals all face questionable prospects.

Those challenging Washington’s capital gains tax say it might apply even if the taxpayer takes no action to generate their gains — in other words, they are taxed because they own the asset, not because they took any action regarding it.

For example, a Washington resident who owns shares in an out-of-state company might benefit if the board of directors decides to sell major assets, with revenue passed on to shareholders, they wrote. In such a case the tax would be imposed based not on where the activity occurred, but where the shareholder lives, with implications regarding interstate commerce under the U.S. Constitution, they argued.

They say the state’s description of the measure as an excise tax is merely political maneuvering designed to conceal its true nature. The 41 states that tax capital gains tax it as income, they argue.

Seven states have no income taxes at all — Washington, Alaska, Florida, Nevada, South Dakota, Texas and Wyoming — and two others, New Hampshire and Tennessee, tax only dividends and interest income earned by individual taxpayers.

The challengers noted that since the 1930s, Washington’s voters have 10 times rejected constitutional amendments or initiative measures that would allow or impose income taxes.

“Whether the existing tax system is desirable or should be changed is a quintessential economic policy matter not appropriate for judicial resolution,” they wrote.