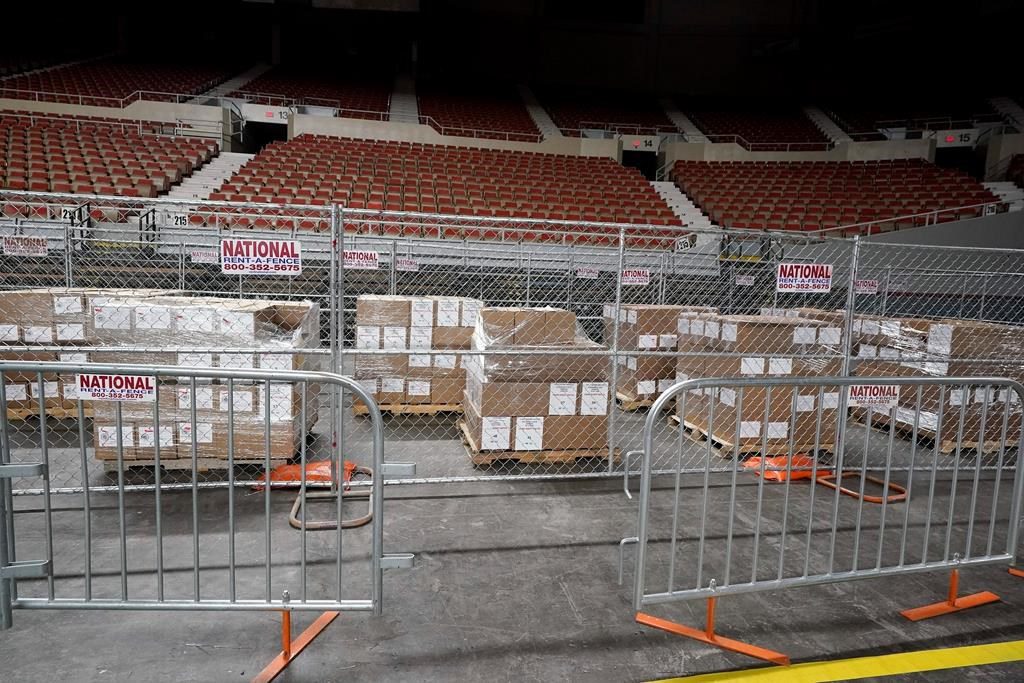 PHOENIX â€” A judge hearing a challenge to voter privacy policies during the Republican-controlled Arizona Senate’s recount of 2.1 million 2020 election ballots in the county that includes metro Phoenix said Tuesday he is not convinced voter secrecy is being upheld.

The comment from Maricopa County Superior Court Judge Daniel Martin came at the end of a lengthy hearing where he also declined to extend a previous judge’s order that auditors hired by the Senate comply with state voter privacy laws — at least until he hears more at a hearing on Wednesday.

"I will share with you all, I am not yet persuaded that there has been a showing that the rights of the voters in Maricopa County are being protected," Martin said. "And I think we will touch on this tomorrow when we address the policies and procedures and whether or not they can be withheld from public view."

The Arizona Democratic Party and the lone Democrat on the GOP-controlled Maricopa County Board of Supervisors sued the state Senate and the contractor overseeing the election audit, Cyber Ninjas, Thursday. They want the recount of the 2020 presidential election won by President Joe Biden halted unless they get guarantees that voter privacy and ballot secrecy is ensured.

A judge who has since stepped aside from the contentious case on Friday ordered the recount halted if Democrats posted a $1 million bond, which the party declined to do. He also ordered the Senate and private election auditors to follow state law on voter and ballot secrecy and for Cyber Ninjas to produce its recount policies and procedures in court.

Cyber Ninjas is a Florida firm with no election experience run by Doug Logan, who has shared unfounded conspiracy theories claiming the official 2020 presidential election results are illegitimate. His attorney is seeking to have its policies and procedures for protecting voter privacy kept secret, arguing that they are trade secrets.

Martin plans to take testimony onthe company’s request to keep the material secret at a hearing Wednesday. He also said he plans to consider whether to again order the recount halted or renew the previous judge’s orders on ballot secrecy rules.

He started Tuesday’s hearing by rejecting the Senate lawyers’ arguments that they are not required to follow state elections law outlining how voters’ constitutional rights are protected.

"The Arizona Senate has the constitutional authority to conduct the audit as part of its legislative function," Martin said. "However, the manner in which that audit is conducted must be balanced against the constitutional rights of the voters in Maricopa County, including the rights to secrecy and confidentiality of information."

The recount is continuing at Veterans Memorial Coliseum at the state fairgrounds. Dozens of workers on Friday began a hand count of all the Maricopa County ballots, with little transparency and the press barred from the site, unless they signed up as official observers and agreed to sit for six-hour shifts.

Roopali Desai, the Democrats’ attorney, told Martin that the audit has been beset by issues from the start, and the refusal to release information on who is doing the counting and how ballot secrecy is being protected are troubling.

"They say they have an earnest desire to comply with the law. Well, what steps are they taking to make sure their desire is a reality?" Desai told the judge. "They say there are many procedures in place to protect the integrity of ballots and the machines. Where are those procedures? Why have the people of Maricopa County not seen them?"

Republican Senate President Karen Fann’s attorney, Kory Langhofer, said the auditors will absolutely follow the law, but he noted that the previous judge’s order lacked clarity and that many laws do not apply to an audit that is not an official recount that can change the election outcome.

He also said the ballots are anonymous and no voter could be identified.

The Senate audit can't overturn the results of the election, but Republicans who control the state Senate say it is needed to restore voter confidence and help them craft changes to state election laws. Senate Democrats call the audit an effort to perpetuate "The Big Lie," which is what they call former President Donald Trump's insistence that he only lost the election because of election fraud.

The Republican-dominated Maricopa County Board of Supervisors stands by the election results, which showed Biden won the county by just over 45,100 votes and Trump lost the state by nearly 10,500 votes. Numerous audits and a hand recount of a sample of ballots were done.

Fann, the Senate president, blamed the media for the need for increased security after a television reporter entered the facility and walked right up to the ballots without being challenged last week. She also said in an interview Tuesday on KTAR radio that the media is getting regular briefings and is allowed some access.

That’s not accurate. Former Arizona Secretary of State Ken Bennett, who is serving as the Senate’s liaison to the private auditors and charged with talking to the media, had not briefed the media since Thursday before holding a media briefing on Tuesday evening. And media access to the counting site was only allowed with major restrictions on Friday, but Bennett agreed to allow media to return Monday. He said reporters will now be allowed in for each counting shift.

Bennett vowed Tuesday to ensure that the recount would be done fairly, even while dodging questions about the contractor’s lack of openness about its procedures.

"We are going to be able to tell every Arizonan in a few weeks that they can have complete integrity and trust in their elections, or we have some parts of the election that need to be improved,” Bennett said.

Bennett only had an estimate of how many of the 2.1 million ballots have been hand counted since the recount began on Friday, putting the number at less that 100,000. The Senate has the facility until May 14.

“We're on track to get the job done in the time we have," Bennett said.