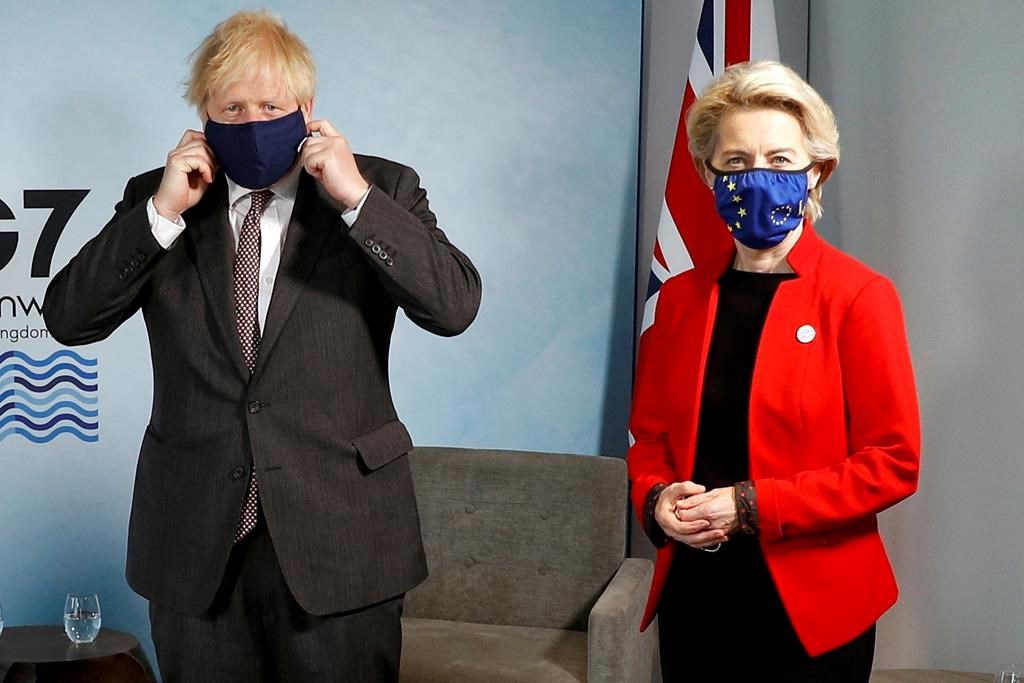 LONDON (AP) — British Prime Minister Boris Johnson gave a strong hint Saturday that the next planned relaxation of coronavirus restrictions in England this month will be delayed as a result of the spread of the delta variant first identified in India.

In a series of interviews on the sidelines of the Group of Seven leaders’ summit in southwest England, Johnson conceded that he has grown more pessimistic about sanctioning the next easing scheduled for June 21 as the number of infections across the U.K. has increased to levels not seen since February.

The British government has planned to take the next step in bringing England out of lockdown by removing all legal limits on social contact — including allowing nightclubs to reopen for the first time since the pandemic struck in March 2020. Johnson is set to make an announcement about the June 21 timetable on Monday.

However, the recent rise in new confirmed cases has led many scientists to call for a delay, potentially of up to four weeks, so more people can get vaccinated before the restrictions are lifted.

“It’s clear that the Indian variant is more transmissible, and it’s also true that the cases are going up, and that the levels of hospitalization are going up,” Johnson said on Sky News. “Now, we don’t know exactly to what extent that is going to feed through into extra mortality, but clearly it’s a matter of serious, serious concern.”

Asked whether he was less optimistic now than he was at the end of May, he replied: “Yes, that’s certainly fair.”

The U.K. has recorded nearly 128,000 coronavirus-related deaths, more than any other nation in Europe. After a devastating winter surge, COVID-19 deaths fell sharply recently following a strict months-long lockdown and the rapid rollout of vaccines.

The improved backdrop has allowed lockdown restrictions to be eased in the U.K. over the past couple of months, with most sectors of the economy and society operating within social distancing guidelines. The four nations of the U.K. — England, Scotland, Wales and Northern Ireland — have lifted restrictions at different paces but have generally pursued similar plans.

However, in recent days, more and more scientists have grown increasingly concerned and have called on the British government to push back the June 21 easing, the fourth stage in a four-step unlocking which has been labeled by parts of the British media as “Freedom Day.”

Supporters of a pause, which includes the British Medical Association, say it would make the vaccine rollout more effective by allowing more younger people to get their first shot and older people to receive their second, which evidence shows helps contain the delta variant.

Dr. Chaand Nagpaul, the chair of the British Medical Association council, said “there is a huge risk that prematurely relaxing all restrictions will undo the excellent work” of the country’s vaccination program and further fuel infections.

“It’s not just about the number of hospitalizations, but also the risk to the health of large numbers of younger people, who can suffer long-term symptoms affecting their lives and ability to work,” he added.

The vaccine rollout, which has primarily been based on age, was extended to 25- to 29-year-olds earlier this week. The government has said it wants every adult to have received at least one dose by the end of July. Around 62% of the British population has had one shot so far, while 43% has had two.

Government figures reported Friday showed 8,125 new daily cases. That’s the highest one-day figure since Feb. 26 and means that the 7-day average, which smooths out daily fluctuations, has increased threefold over the past month.

The delta variant, which is considered to be at least 40% more transmissible than the previous dominant strain, now accounts for more than 90% of all new confirmed infections in the U.K.

Though Johnson appeared to indicate that he was ready to sanction a pause in the lockdown-easing, he sought to downplay any concerns that restrictions would be re-imposed. When announcing the government’s four-stage plan for coming out of lockdown in February, Johnson stressed that every scheduled easing would be driven by “data, not dates” and that each stage would be irreversible.

“The whole point of having an irreversible roadmap is just that, to make it irreversible, and to do that sometimes, as I’ve said repeatedly, you have to be cautious,” he said.

“Just to cheer you up a little bit, I would like to tell you that the scientists are agreed about one thing: They do not think there is any case for going into reverse,” Johnson added.