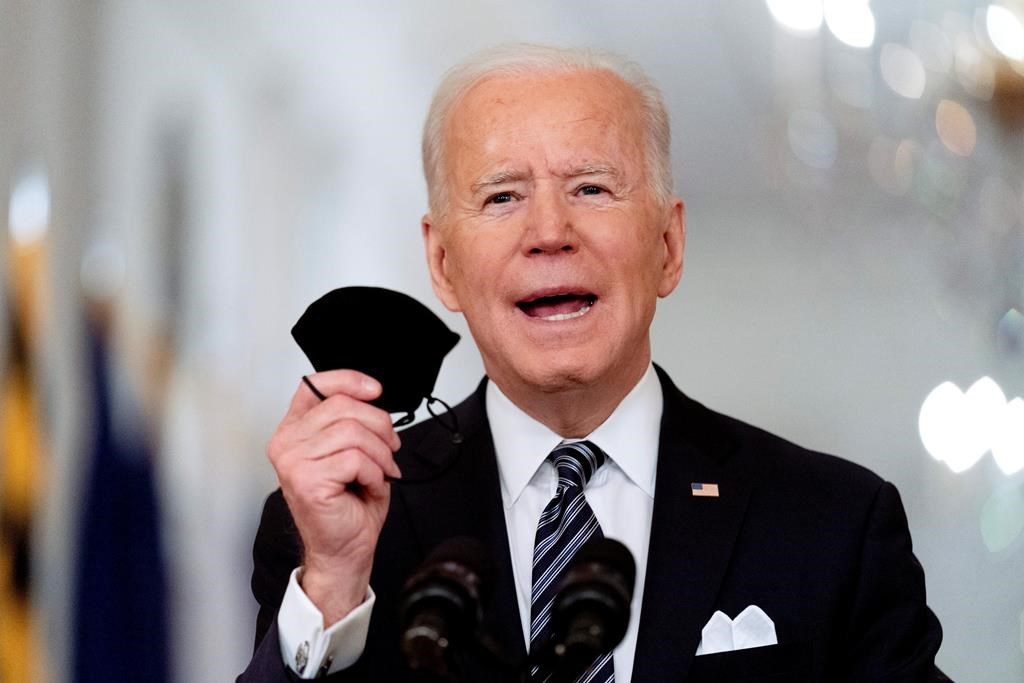 WASHINGTON â€” President Joe Biden spent his first 100 days in office encouraging Americans to mask up and stay home to slow the spread of the coronavirus. His task for the next 100 days will be to lay out the path back to normal.

When he entered office, Biden moved swiftly to overcome problems with vaccine supply and more than tripled the country's ability to administer them. But ending the coronavirus pandemic, the central challenge of his presidency, will require more than putting shots into arms â€” a task now growing more difficult as demand sags â€” but also a robust plan to help the nation emerge from a year of isolation, disruption and confusion.

If Biden launched the nation onto a war footing against a virus that infected nearly 200,000 Americans in January and killed about 3,000 of them per day, the next months will be tantamount to winning the peace. Already, deaths are down to fewer than 700 per day and average daily cases are below 60,000. U.S. officials insist there is a long way to go before the country can be fully at ease, but the progress is marked.

Going forward, success will mean finishing the nation's herculean vaccination campaign â€” to date 43% of Americans have received at least one shot â€” overcoming lagging demand and communicating in clear terms what activities can be safely resumed by those who are vaccinated. Key milestones include Biden’s July Fourth pledge that Americans can safely gather with friends and family, and the start of the new school year, when the president hopes to have all schools open safely.

Biden was to speak later in the day on the state of the pandemic response. Officials said a focus in the coming weeks will be on easing restrictions for vaccinated people, both in recognition of their lower risk and to provide an incentive to get shots.

"We're excited about the progress we've made, and the opportunity ahead of us, and because of the vaccination program we built we're further along than almost anyone predicted," said White House COVID-19 co-ordinator Jeff Zients in a Monday interview. "It means we're closer to returning to normal."

On Inauguration Day, the notion of COVID-19 vaccine supply eclipsing demand seemed fanciful, with only priority groups eligible for shots and an underground economy emerging for "extra doses" for everyone else. Now, shots are so plentiful in many places that the Biden administration is encouraging states and pharmacy partners to set up walk-in sites for doses without appointments.

This "new phase," as Biden's team calls it, has been the subject of intense preparation since even before the president's inauguration. Wary of wasting a moment, Zients and other officials drafted a mountain of emails to launch the federal bureaucracy into action to be sent in the first minutes after their government email accounts were activated. Even as more Americans get vaccinated, Zients said, the White House wasn't letting up its urgency just yet.

"I think this exact same approach that served us well the first 100 days will serve us well for the next 100 days," he said.

One of Biden’s first actions in office was to increase the federal government’s orders for the vaccines to ensure supplies for all Americans by early summer. Now the U.S. is able to turn to sharing some of the precious supply with the world, as the White House announced Monday it would do with roughly 60 million doses of the AstraZeneca vaccine produced in the U.S. but not yet authorized for use here. At the same time, the White House was instrumental in an agreement reached with drugmaker Sanofi on Monday to help scale up production through next year of Moderna’s two-dose shot, which makes up more than 40% of doses administered in the U.S.

Believing most Americans who have yet to get a shot would do so if it were easier, the White House has deployed billions of dollars toward ads encouraging shots, community programs to bring doses to the hardest to reach Americans, and tax credits to encourage employers to give their workers paid time off to get protected.

"In this next phase we'll focus on increasing accessibility, building confidence, continuing to put equity at the centre of everything we do," Zients said of the push to maximize the number of Americans vaccinated in coming months. "It's not going to be easy, but neither was getting to 200 million shots in less than 100 days, and we did that."

"The president's been very clear that he'll shoot straight with the American people at all times and that's consistent with the wartime effort in his leadership," said Zients, who echoed Biden's call that the administration would be "leading with science and facts."

In March, Biden predicted a return to small, in-person gatherings of vaccinated people for the July Fourth holiday, and aides later clarified that he believed that would be possible without masks. To many, it was viewed as an overly conservative reflection of what much of the nation was already doing. But it also reflected the lingering unknowns about how to reboot a nation that for a year has been living in a state of partial hibernation.

"The country has gotten tired of lockdowns," said Robert Blendon, a Harvard professor of health policy and political analysis.

"I think there's tension within the administration," Blendon said. "Anybody tracking public mood knows that the more you could lay out a firm road map, the better people in this country will feel."

He added that while experts are telling Biden "we can't predict it's going to play out exactly that way," people's lives would be better if the administration "could lay out, by September you'll do this, by November you'll do this. But there are these unknowns."

It's those variables that keep White House officials up at night â€” the spread of "mutant" strains of the virus, dropping demand for the vaccines and the public's growing eagerness to return to normal.

"It's a race against time," Mark Schlesinger, a Yale professor of health policy, said of the dash to get more people vaccinated while they still co-operate with measures meant to slow the spread of the virus and before potentially dangerous variants develop.

In an awkward shift of public messaging, Biden's next 100 days will require him to encourage many of the pre-pandemic behaviours that he's been discouraging for the last year while at the same time monitoring for variants and pockets of infection.

For the broader economy, federal relief dollars and pent-up demand will stimulate growth. But the future of key sectors of the U.S. economy that employ millions, particularly travel and hospitality, depends on how Biden manages the nation's emergence from the pandemic.

"The challenge for the Biden administration is, as they try to present a national portrait of how America is as a whole, how do they responsibly deal with that variation and bring those more laggard states and areas where vaccine hesitancy is still high and lots of vulnerable people still uncovered," Schlesinger said. "That's the million-dollar question."

For Biden, who was elected to bring an end to the pandemic but has a far broader legislative agenda, the politics of getting the virus response right can’t be ignored. "If the president's able to get people back to some normal life, the relief will be unbelievable,” Blendon said. “And he'll get enormous credit."