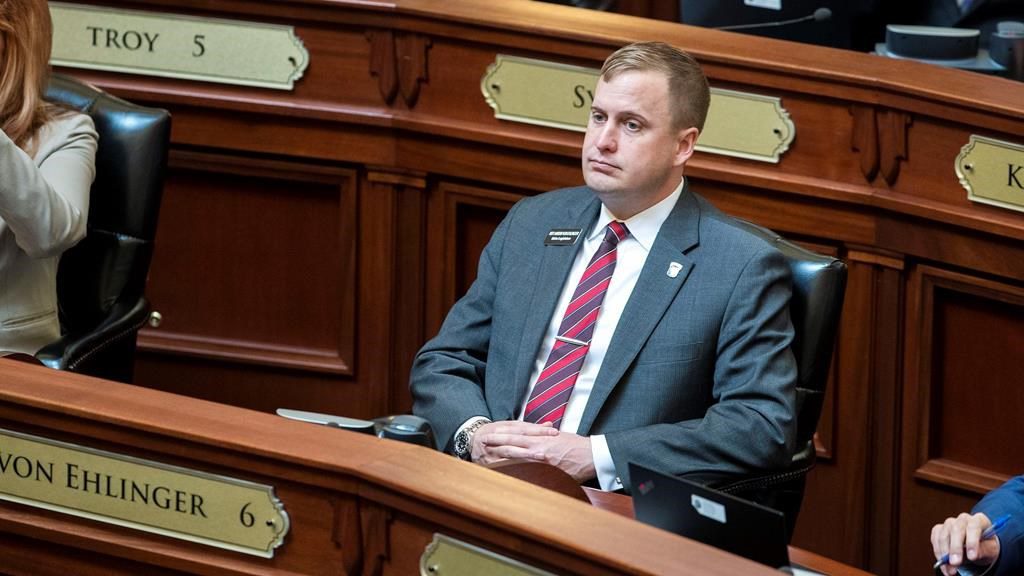 BOISE, Idaho â€” An Idaho lawmaker facing rape allegations from a 19-year-old intern was previously warned against hitting on women who work at the Statehouse after his colleagues heard complaints from other staffers, according to documents gathered by the Legislature's ethics committee and obtained by The Associated Press.

The investigation into Lewiston Republican Rep. Aaron von Ehlinger's conduct began in March when a 19-year-old legislative intern told a supervisor that the 38-year-old lawmaker raped her at his apartment after the two had dinner at a restaurant.

The Boise Police Department has a criminal investigation underway and the Legislature's Ethics Committee is scheduled to hold a public hearing on Wednesday to determine if the lawmaker "engaged in conduct unbecoming a representative which is detrimental to the integrity of the House." The Associated Press obtained the investigatory documents on Monday via a public records request.

Von Ehlinger has denied the allegations and maintains the sexual encounter was consensual.

"I take my my service seriously, both to my Country and to my State and the idea that I would be out doing something like this is um, preposterous," he told the committee according to a transcript of the interview. "And it disgusts me to even be accused of it."

His attorney, Edward Dindinger, told the AP in an email Monday night that the lawmaker is innocent of wrongdoing and looks forward to putting the matter to rest.

"These are non-issues which only serve to distract from the heinous, demonstrably false allegations which have been levelled against Representative von Ehlinger," Dindinger wrote.

The ethics committee documents include text messages, letters and transcriptions of interviews the committee did with von Ehlinger, his colleagues, other Statehouse staffers and the young intern who made the rape report. The AP does not normally name victims in alleged sexual assault cases

Several of the people who were interviewed testified that concerns emerged about von Ehlinger's behaviour after they heard that he had flirted with staffers or otherwise made women who worked at the Statehouse uncomfortable.

One staffer asked a supervisor for help after she said von Ehlinger made her feel uncomfortable and asked her on a date.

That situation was resolved with an email from the staffer who told the lawmaker that she was married and not comfortable being alone with him, according to the documents.

In another instance, a lobbyist reported that von Ehlinger followed her around and made her feel uncomfortable during events outside the Statehousen and that at one event she was worried he might have even rifled through her purse, trying to find her home address.

During his testimony, von Ehlinger told the committee that he had previously asked out another woman who works on the Capitol grounds.

At various times, Idaho Speaker of the House Scott Bedke and House Majority Caucus Chair Rep. Megan Blanksma were alerted to the complaints, according to the documents.

Blanksma was concerned to the point that she asked a colleague to warn von Ehlinger that he needed to remain strictly professional and avoid any behaviour that could be perceived as flirtatious.

Von Ehlinger did not seem receptive to the warning, Blanksma told the committee.

"I hate to attribute, you know, any particular attitude to him but, it was, he was defensive when he came upstairs and I don't know that he appreciated the effort or the spirit in which the suggestion was made," Blanksma said. "I felt that he was pushing back on me even suggesting that path forward."

Von Ehlinger told the committee that despite the warning, he still thought it was appropriate to ask staffers out on dates because he believed if the individual had a problem with him doing so, they would let him know, "and that the matter would be closed."

The 19-year-old intern told the committee that von Ehlinger brought her back to his apartment instead of to her car after dinner because he said he had to pick up something first.

When they were inside, she said he physically carried her to the bedroom and at one point he was kneeling on her with his knees on top of her shoulders.

She said she told von Ehlinger she didn't want to have sexual contact and at one point lied and said she wasn't on birth control in hopes that he would be dissuaded. She said the lawmaker ignored her, forcing her to have oral sex.

Von Ehlinger's attorney, however, says the lawmaker passed three lie detector tests with no signs of deception, and that the tests show he never picked up the intern, never sat on her or straddled her, and that he never used force, fear or persuasion to engage in sexual contact with the teen. The attorney, Edward Dindinger provided copies of the polygraphs to the AP.

The documents also include transcripts of a call between the intern and von Ehlinger, in which she confronted him and said he forced her to perform oral sex.

"Like I told you I didn't wanna do that. I said I was was uncomfortable," she told von Ehlinger during the call.

Von Ehlinger countered that he thought she was enjoying the physical interaction, but said he now has regrets.

"I um clearly made you feel uncomfortable," he said, according to the transcript. "And um, I didn't know that at the time, but I do now. And that's why I'm, uh, like seriously remorseful about it."

The intern told the ethics committee that the investigation had been overwhelming, but that she would do what she needed to in order to support the process.

This story has been updated to correct that von Ehlinger’s attorney says he passed three lie detector tests, not two.