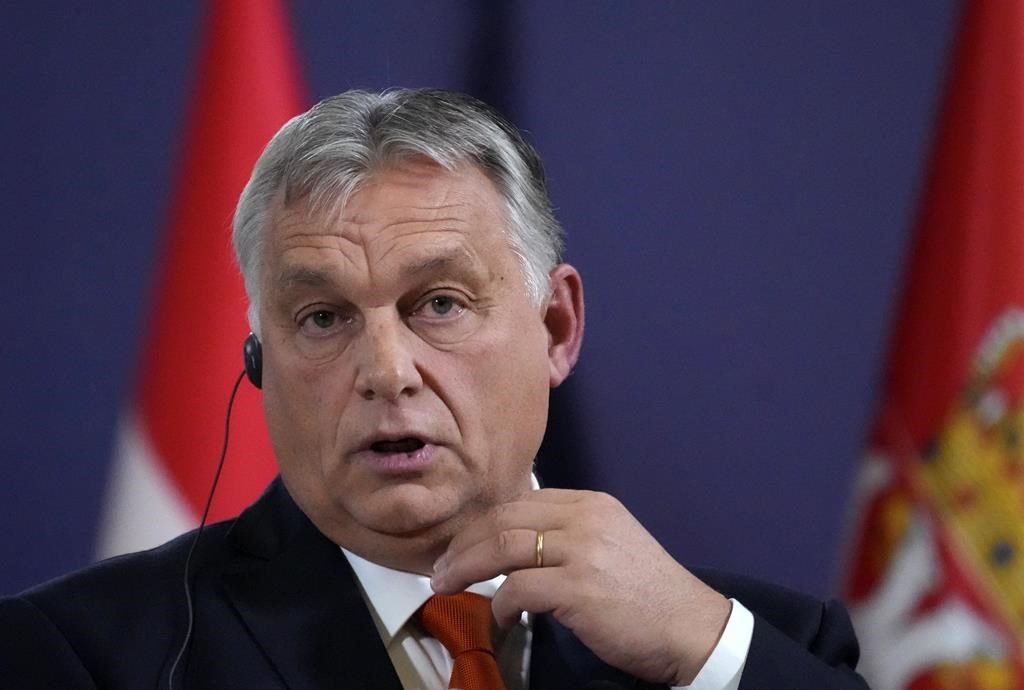 BUDAPEST, Hungary (AP) — Hungary will not support a European Union plan to provide Ukraine with billions in budget assistance next year, Prime Minister Viktor Orban said Friday, digging in on his country’s blocking of a major aid package the EU unveiled last week.

Speaking at a conference in Budapest, Orban said that while Hungary condemns Russia’s aggression and supports the Ukrainian people, he is not willing to put Ukraine’s interests before those of his own country.

The aid plan would provide 18 billion euros ($18.6 billion) to Ukraine next year in regular payments to help keep its energy and health care facilities running as well as to fund salaries and pension schemes.

Hungary’s refusal to endorse it threatens to derail the plan completely since changes to EU budget rules require the unanimous approval of member countries.

Orban, widely seen as Russian President Vladimir Putin’s closest EU ally, has also vocally opposed the bloc’s sanctions against Moscow for the war in Ukraine, though he has ultimately always voted for them.

As an alternative to the EU aid plan, Orban recommended that the EU’s 27 members determine how much they are willing to provide to Ukraine and distribute the sum in a “proportional and fair way” among themselves without jointly taking out loans to make the payments.

He said Hungary would be willing to provide Ukraine with 60-70 billion forints ($152-$178 million) from its own budget on bilateral terms — an amount he said would not fundamentally harm Hungary’s national interests.

The Hungarian government’s threat to veto the aid package for Ukraine comes after it scuttled EU-wide adoption of a global corporate tax deal in June and campaigned heavily at home against sanctions on Russia. Orban argues such measures are destroying Europe’s economy and drawing the EU closer to entering the war itself.

But some in the EU see the moves as a sign that Budapest is exerting leverage in an attempt to force the bloc to release billions in economic recovery funds and other money that was held up over concerns that Orban has curtailed democratic norms and violated rule-of-law standards.

“Our financial and humanitarian support and our support for civilian infrastructure in the framework of winter aid is not a normal European matter in which one gambles and negotiates back and forth about money,” Baerbock said in a reference to Hungary’s apparent veto.

“This European financial support is saving lives every day, and I think and believe that everyone is aware and should be aware of that in these difficult times,” she said.

The EU’s executive branch, the European Commission, said the aid to Ukraine would involve loans with extremely favorable terms worth around 1.5 billion euros every month, possibly starting in January. Ukraine would not have to reimburse the funds for at least a decade, and EU member countries would cover the interest costs.

The commission intends to borrow the money on capital markets using the combined weight of the 27 countries to secure more favorable terms. Some of the effort would involve restructuring part of the EU’s long-term budget, and this requires the unanimous approval of member countries.

Follow AP’s coverage of the war in Ukraine at https://apnews.com/hub/russia-ukraine