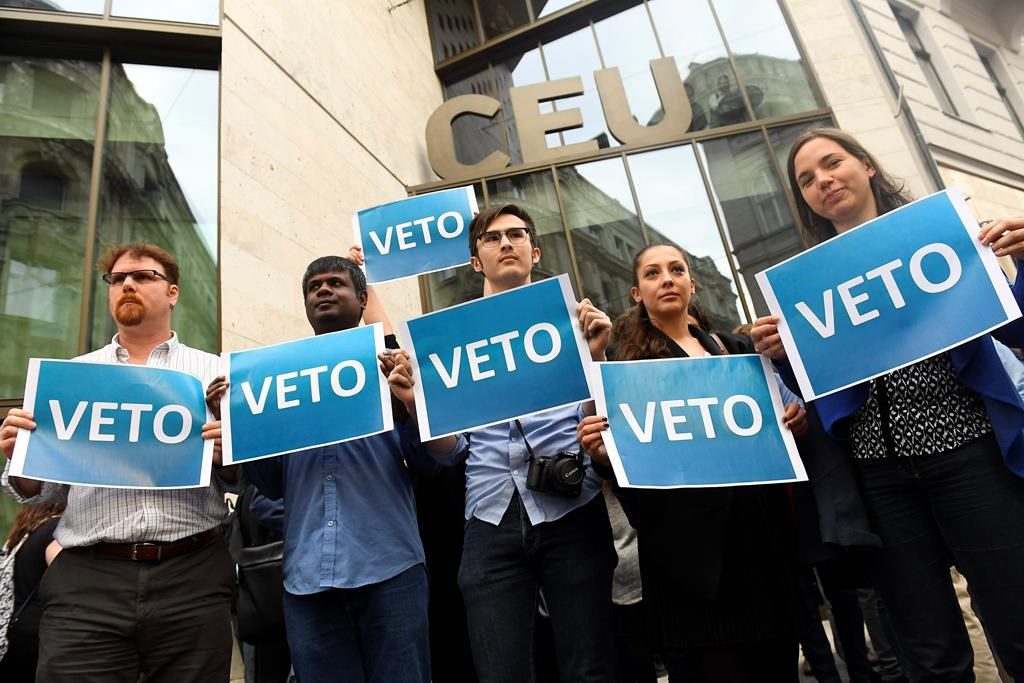 BUDAPEST, Hungary â€” Hungary’s government is walking back two controversial pieces of legislation that targeted foreign universities and civil society groups after they were struck down by the European Union’s top court. Yet some affected groups say the changes don’t go far enough in restoring their full rights.

A draft bill submitted to Hungary’s parliament this week would amend a 2017 law on higher education which effectively forced one of the country’s top schools, Central European University (CEU), to leave the country. In a ruling last year, the European Court of Justice found the legislation was incompatible with EU law.

The law placed additional burdens on foreign universities operating in Hungary, and were widely seen as specifically targeting CEU. The university, founded by Hungarian-American financier George Soros, moved its operations to Vienna in 2018 after a protracted conflict with Hungary’s government. It conducts only limited research activities from its previous home in Budapest, Hungary’s capital.

Prime Minister Viktor Orban, a populist and nationalist who fiercely opposes immigration, is a longtime critic of Soros and has waged numerous public campaigns against the billionaire, alleging he seeks to undermine European values by bring millions of migrants to the continent, charges Soros denies.

"CEU will remain in Austria, a country where basic standards of academic freedom are respected," the university wrote, adding that the amendment "changes nothing" for the university. "We will not subject ourselves again to the political whims of one man and his regime."

Another bill introduced Wednesday would repeal a 2017 law that required civil society groups receiving more than 7.2 million forints ($24,000) per year from foreign sources to register with Hungarian courts and identify themselves as foreign-funded in their online and printed publications.

The government argued the law aimed to increase transparency among civic groups and boost efforts against money laundering and the financing of terrorism.

But the ECJ struck the law down last year, saying it "introduced discriminatory and unjustified restrictions on foreign donations to civil society organizations."

While the draft bill repeals provisions on foreign donations, it adds passages that would designate organizations with annual budgets of more than 20 million forints ($66,000) as “engaging in activities that could influence public life." Such groups would be subject to an annual audit by Hungary's State Audit Office.

Veronika Mora, director of the Hungarian Environmental Partnership Foundation, an affected group, told The Associated Press that the proposed law is a continuation of government communication that divides civil society into "good and bad organizations," and limits what the government sees as legitimate civic action.

"Influencing public discourse is one of the functions of civil society, and of people in general. Citizens should be able to contribute to public discourse and form and shape public life," Mora said.

The Civilization Coalition, a collective campaign made up of several dozen civic groups, also opposed the new provisions, expressing concern that audits would be used as "another tool to discredit and stigmatize these groups."

Hungary's Justice Ministry, which authored the bill, did not respond to multiple requests for comment.

Orban's ruling Fidesz party has for years sought to limit the influence of critical civic groups, especially those focused on civil rights and democracy issues. Around 4,000 organizations will fall under the audit requirements of the new law, which Mora says is an effort to neutralize checks on the government.

"Since Fidesz is in power, they have systematically dismantled democratic checks and balances,” she said. “Independent civil society organizations are one of the last representatives of these checks and balances, and they are obviously unwanted by the government."