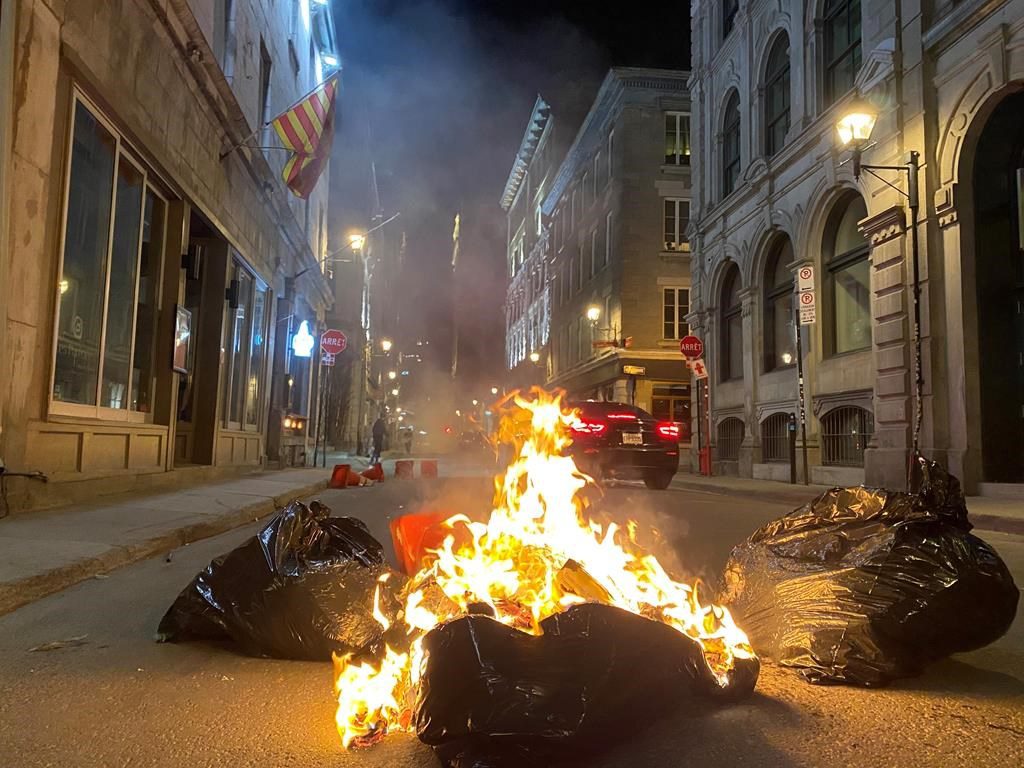 MONTREAL â€” Hundreds of protestors gathered in Montreal on Sunday in defiance of a newly adjusted curfew intended to stem surging COVID-19 case numbers before dozens of them started fires and damaged property in the city’s old quarter.

Police responded with tear gas in a bid to control the crowd, who were purportedly protesting Quebec Premier Francois Legault’s decision to roll the city-wide curfew back from 9:30 to 8 p.m. The move, previously replicated in other COVID-19 hot spots across the province, took effect in Montreal and nearby Laval on Sunday.

The protest began in relative calm, with a mostly young crowd dancing to music from loudspeakers while lighting fireworks and chanting, “freedom for the young.”

But the festive atmosphere quickly turned violent as a few protesters lit a garbage fire in Montreal’s Jacques Cartier Square, which was met with tear gas from riot police.

Police soon rushed the crowd, prompting dozens of protesters to scatter and cause mayhem down the cobblestone streets of Montreal's tourist district.

They lit garbage fires at many intersections and seized projectiles from city streets, hurling them at nearby windows and shattering many.

A spokeswoman for Montreal police said she couldn’t offer any comment on the protests, describing them as an ongoing situation. She said that more information would become available as things stabilized and police on the scene could file their reports.

Marwah Rizqy, a Liberal member of the provincial legislature that represents a Montreal riding, tweeted her disapproval of the protestors’ actions.

“Chanting freedom while ransacking windows of stores that are already just getting by. It's disheartening / outrageous,” Rizqy tweeted in French.

A few protesters were still out on the streets at around 9:30 p.m. throwing glass, breaking city infrastructure and running from police.

Sirens rang through the streets as firefighters put out the many small blazes lit along Old MontrÃ©al's alleys and narrow roads.

The curfew ostensibly at the heart of the protest was imposed to curb COVID-19 infection rates that have spiked in several regions in recent weeks.

Hospitalizations jumped by 25 to 608, with 139 patients in intensive care.

Health Minister Christian Dube tweeted that the numbers are concerning given that 58 per cent of new cases involve people under the age of 40.

“While vaccination accelerates, we must continue to adhere to the measures if we want to defeat this pandemic,” Dube wrote.

Legault said last week that he was imposing the health order in Montreal and Laval despite a relatively stable case count as a precaution, due to the heavy presence of more contagious virus variants.

Residents in those regions who leave their homes between 8 p.m. and 5 a.m. without a good reason could face fines of over $1,000.

Legault extended the curfew in Montreal and other red zones from 8 p.m. to 9:30 p.m. in mid-March, but said last week that the evolving COVID-19 situation gave him no choice but to reverse course.

The government also closed schools and non-essential businesses in those areas, and Legault announced Thursday that the measures would be extended until at least April 18.

The province also gave 59,447 doses of vaccine on Saturday, and has currently given a shot to just over 22 per cent of the population.

This report by The Canadian Press was first published April 11, 2021