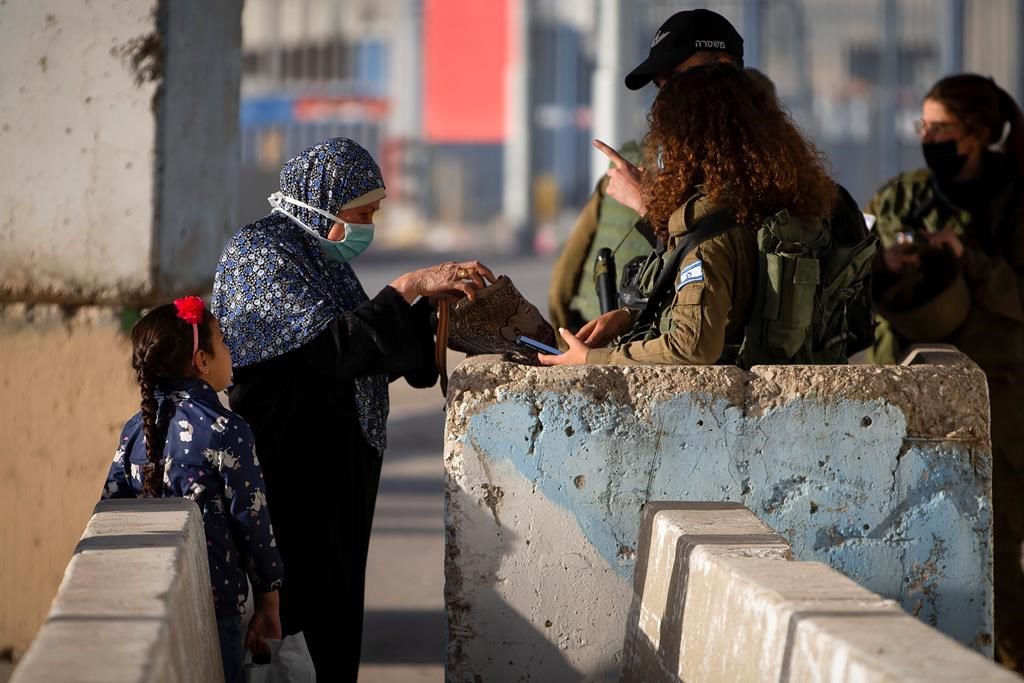 OTTAWA â€” An international human-rights organization is calling on the Trudeau government to take action against alleged “crimes against humanity” by the Israeli government.

The demand from Human Rights Watch comes alongside a new report from the group that accuses Israeli authorities of methodically discriminating against Palestinians within both Israel and the West Bank and Gaza Strip.

Based on interviews, field work and a review of government documents, the 218-page report concludes that Israeli laws and policies have confined and subjugated Palestinians “by virtue of their identity,” amounting in some cases to “persecution and apartheid.”

"We recognize that the word ‘apartheid’ stings. But at the same time, apartheid is the reality for many Palestinians,” Farida Deif, head of the Canadian chapter of Human Rights Watch, said in an interview.

The report argues that Israel’s treatment of Palestinians aligns with United Nations and International Criminal Court definitions of apartheid as comprising an intent to maintain domination of one racial group over another and involving inhumane acts and systematic oppression to that end.

Human Rights Watch lays out its case by drawing on a range of statutes and de facto restrictions.

These include a 2018 law passed in the Knesset that declares the right to self-determination in Israel as “unique to the Jewish people.” The report points to land confiscation in the West Bank and policies that prohibit Palestinians in the territories from voting or moving freely.

It also refers to “draconian military law,” an effective freeze on family reunification and the routine denial of building permits among measures that often have “no legitimate security justifications.”

“No matter where you stand on history, the peace process or borders, we can all see and agree that inhumane treatment of Palestinians shouldn’t continue unchecked by the international community, including Canada,” Deif said.

She said Canada and other Israeli allies should attach conditions to arms sales, deploy targeted sanctions against state officials and support prosecutions in the International Criminal Court.

The ICC’s chief prosecutor launched an investigation last month into alleged crimes in the Palestinian territories, with a focus on Israeli military actions and settlement construction in lands captured in the Six-Day War in 1967.

Israeli Prime Minister Benjamin Netanyahu has called the court “biased” and decried its move as “the essence of anti-Semitism and hypocrisy.”

Kenneth Roth, executive director of Human Rights Watch, said Israel should not deny Palestinians’ fundamental rights “solely because they are Palestinian and not Jewish.”

"While much of the world treats Israel's half-century occupation as a temporary situation that a decades-long 'peace process' will soon cure, the oppression of Palestinians there has reached a threshold and a permanence that meets the definitions of the crimes of apartheid and persecution," Roth said in a release.

“Those who strive for Israeli-Palestinian peace, whether a one or two-state solution or a confederation, should in the meantime recognize this reality for what it is and bring to bear the sorts of human rights tools needed to end it."

Two key Israeli policies of recent years have come under the microscope of the ICC and human rights groups: its repeated military operations against Palestinian militants in the Gaza Strip, highlighted by a devastating 2014 war, and its expansion of Jewish settlements in East Jerusalem and the West Bank. Experts say that Israel could be especially vulnerable to prosecution for its settlement policies.

Although the Palestinians do not have an independent state, they were granted non-member observer status in the UN General Assembly in 2012, allowing them to join international organizations like the ICC. Since joining the court in 2015, they have pushed for a war crimes probe against Israel.

Israel, which is not a member of the court â€” Canada is one of 123 member states â€” has said it does not have jurisdiction because Palestine is not a sovereign state.

â€” With files from The Associated Press