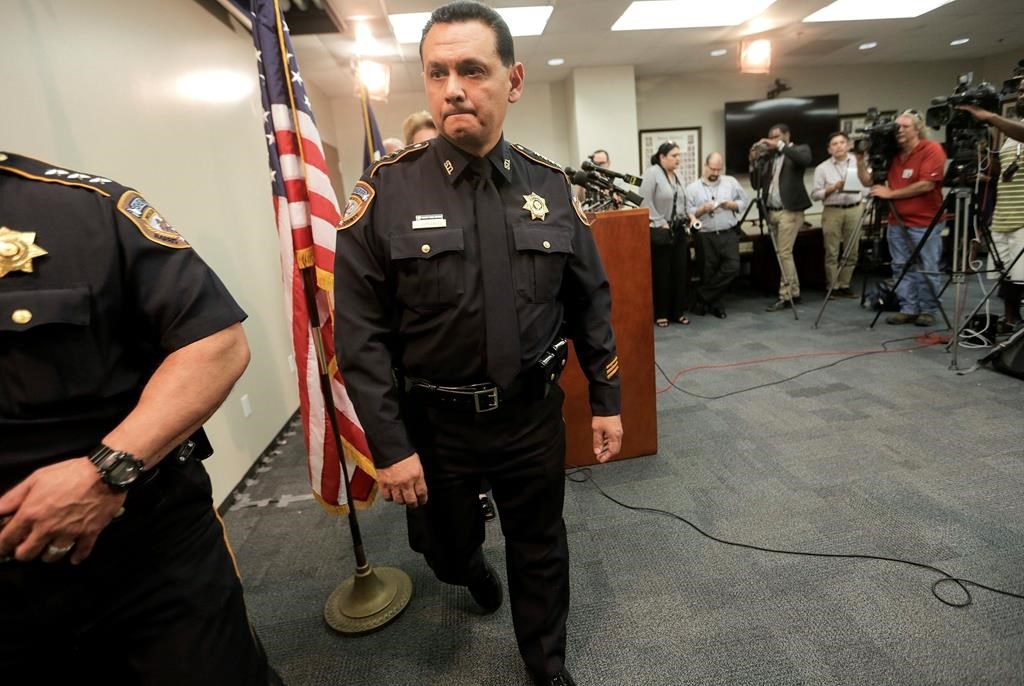 HOUSTON â€” President Joe Biden on Tuesday nominated the sheriff of one of the nation’s most populous counties to lead the agency that deports people in the country illegally, picking a seasoned law enforcement official who sharply criticized Donald Trump’s hardline immigration policies.

Harris County Sheriff Ed Gonzalez, whose jurisdiction includes the Houston metropolitan area, was nominated director of U.S. Immigration and Customs Enforcement, an agency that has been without a Senate-confirmed leader since 2017.

After his election in 2016, Gonzalez fulfilled a campaign promise to withdraw Harris County from a federal partnership that authorizes sheriff’s deputies to enforce immigration laws, ending an agreement that had been in place since 2008. Such agreements grew from 35 to to 150 during Trump’s presidency, with many of those additions in Texas and Florida.

At the time of the withdrawal, Gonzalez said his decision was financially motivated. Deputies trained under the program needed to be reassigned to other law enforcement duties.

Gonzalez, who rose to sergeant during an 18-year run at the Houston Police Department, pointedly criticized Trump’s policies when the then-president vowed to deport millions of people.

"I do not support ICE raids that threaten to deport millions of undocumented immigrants, the vast majority of whom do not represent a threat to the U.S.," he wrote on Facebook in July 2019. "The focus should always be on clear & immediate safety threats. Not others who are not threats."

Gonzalez expressed concern then about driving "undocumented families further into the shadows," discouraging them from reporting crimes to authorities.

The nomination was announced shortly after ICE said it was limiting arrests at courthouses, replacing a Trump policy that gave immigration authorities wider latitude.

The Biden administration is expected to soon announce priorities and guidelines on who to deport. They are certain to be narrower than those of Trump, who said anyone in the country illegally was subject to removal, and perhaps those of Barack Obama, who angered allies with record-high deportations before easing up considerably in his second term.

Deportations have already fallen sharply under Biden’s watch. There were 2,214 immigration arrests in March, down 67% from 6,679 in December, Trump’s last full month in office.

If confirmed, Gonzalez will oversee an agency with more than 20,000 employees and an annual budget of $8 billion. It manages the world’s largest network of immigration jails and includes Homeland Security Investigations, which looks at a wide range of international crimes including money laundering, antiquity theft, child pornography and human smuggling.

"With a distinguished career in law enforcement and public service, Sheriff Gonzalez is well-suited to lead ICE as the agency advances our public safety and homeland security mission," Mayorkas said.

In accordance with Texas law, Gonzalez honoured ICE requests to hold suspects up to 48 hours. The Harris County Jail honoured more requests than any other facility in the country during the 12-month period that ended in September 2019, according to Syracuse University’s Transactional Records Access Clearinghouse.

Biden recently announced two other nominations for key immigration-related positions in the Homeland Security Department: Chris Magnus, police chief of Tucson, Arizona, to lead U.S. Customs and Border Protection; and Ur Jaddou, an immigration lawyer who served in the Obama administration, for U.S. Citizenship and Immigration Services.

Juan A. Lozano And Elliot Spagat, The Associated Press