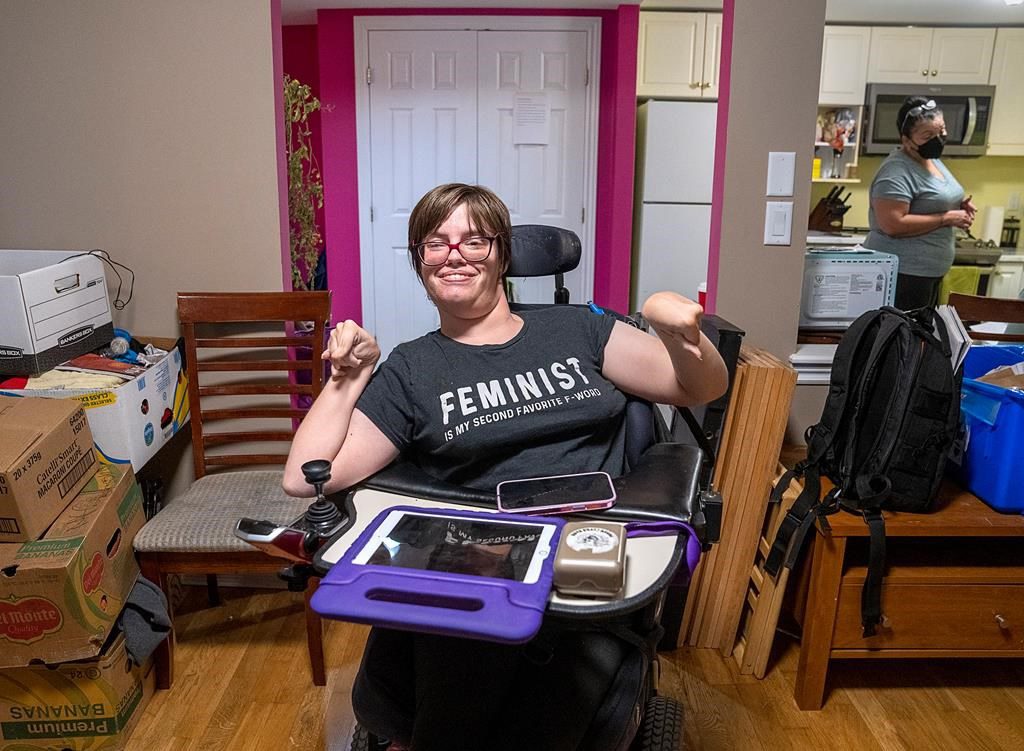 HALIFAX — In Jen Powley’s Halifax apartment, there’s a bustle of activity as moving boxes fly open and her new roommate arranges for an independent life beyond the walls of a nursing home.

“It feels so good,” says Vicky Levack, the new arrival. “I really appreciate it. It’s changed my life. In fact, it may have saved my life.”

The scene in a south-end condominium is the result of a provincially funded pilot project for younger Nova Scotians being shifted out of long-term care into renovated apartments in the city, with round-the-clock care available.

Levack, a 31-year-old with cerebral palsy, has been a prominent activist for people with disabilities, fighting for the past decade to leave a nursing home.

Meanwhile, Powley, an author and community activist who lives with advanced multiple sclerosis, has offered to take a roommate in her apartment — where she has lived with caregivers for 15 years — as part of the project.

The roommates are an early sign of the Progressive Conservative government’s commitment of $3.5 million to move 25 young adults from care homes into the community over the next year, with the goal of moving 200 people over a four-year period. It’s being watched across Canada by advocates for independent living, who argue the programs respect human dignity, save money — and may be safer.

Powley, who speaks softly due to her advanced multiple sclerosis, says the shift can’t come too soon, especially after COVID-19 — during which Canadian nursing homes had one of the highest death rates among western nations.

“I’m glad Vicky is around and out of a nursing home,” Powley said Wednesday in an interview. In her 2017 autobiography, “Just Jen,” she wrote of her own fears of losing her independence, saying, “the thought of institutional care invaded my dreams.”

Others will soon be joining the two activists. Jennifer Saulnier, a 50-year-old with a spinal cord injury, said in an interview Wednesday she’s moving next door to Powley later this month, exiting the Northwood facility — where 53 residents died during the pandemic.

“We’re too young to be in nursing homes. We need some care but we’re not fully to the point where we need total care,” she said.

Saulnier said the program is cheaper for tenants than the nursing home, adding that while a portion of her pension still goes for rent, she expects to have more money left over than the $200 to $300 she had available for expenses each month while at the nursing home.

The two Nova Scotia apartments have required about $200,000 in renovations, estimates Carrie Ernst, the director of Independent Living Nova Scotia, the non-profit operating the project. There will also be the costs of round-the-clock staff to help with the care of the new apartment dwellers.

Ernst argues the costs of long-term care homes are likely higher considering the need for full-time medical staff and the expense of maintaining and renovating aging buildings.

Staff at some of the earlier centres for independent living in Canada say there’s solid evidence that housing younger adults in their own apartments is ultimately cheaper.

Kevin Kowal, the human resource consultant at Ten Ten Sinclair Housing Inc., in Winnipeg, said the centre has steadily grown from the early 1970s, when it offered housing to people with spinal cord injuries, into a system that has multiple units around the city, providing rental units and care to about 100 people.

“Everyone is paying rent. Some people are quite well off and pay normal rent, and others are living under the Manitoba housing program. We just have to pay someone to see the tenant for the number of hours they’re assessed to need someone,” he said.

Then there’s the basic dignity of having greater control over one’s life, he explains.

“If someone (an attendant) shows up to help with lunch, and the tenant says, ‘I’m not hungry,’ then the attendant will say, ‘OK, let’s do something else,'” explained Kowal. “The tenant directs the attendant.”

The Nova Scotia model was also influenced by Vie Autonome Montérégie, a program based in communities southeast of Montreal, where a school was converted into a series of apartments for young adults with disabilities, now known as the “Le Sieur de Normandie” in St-Jean-sur-Richelieu.

Nineteen of the units provide partial care, while 11 provide round-the-clock staffing for younger adults with disabilities, and there’s space for social gatherings and communal meals, when desired.

Jacques Lapointe, the director, said his own son is among the residents, and it’s changed his life over the past decade. “Those people in the apartments are happy. They have a real way to live. The way they put things in their apartment, it’s so important,” he said.

Meanwhile, as Nova Scotia attempts to catch up, Levack says she’ll keep advocating for adults in facilities who want to follow her path. She acknowledges there are still long waiting lists to participate, whether in Nova Scotia or elsewhere in Canada.

Sitting in her new living room, Levack gestures to her new assistants, saying she’s still getting used to how they ask her opinion on everything from upcoming housewarming parties to how to move her body and give her care.

“This is new. Caregivers are more saying, ‘OK, I trust you (Vicky),’ which is what I’ve wanted for approximately ever,” she said.