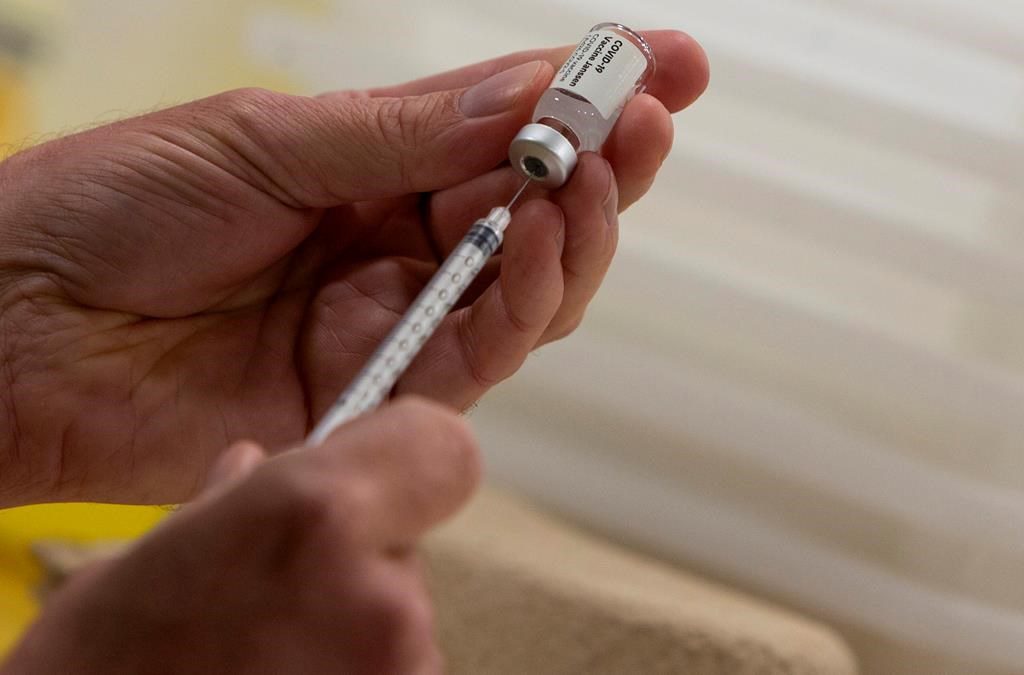 "We are disappointed that the Johnson & Johnson vaccines earmarked for Alberta are delayed, but we value the work of Health Canada to ensure they have the information needed to verify the safety of every single dose,” Sorensen said in a statement.

Plans to distribute the first 300,000 doses were put on hold after Health Canada learned part of the vaccines were manufactured at a Maryland facility that botched 15 million doses bound for the U.S. market.

The Alberta government had planned to split 34,700 doses between Banff and the Rural Municipality of Wood Buffalo, which includes Fort McMurray and has the province’s highest case rate.

The province had not yet indicated if the delay would affect the vaccine program in the Wood Buffalo, a spokesman for the regional government said Saturday.

When asked what the alternate plan is for the hot spots, an Alberta government spokesman pointed to statements Health Minister Tyler Shandro made on Twitter Friday.

“Despite this setback, we fully intend to keep our commitment to the people of Banff and (Wood Buffalo). Alberta Health officials are urgently looking into how we can deliver doses from other sources,” Shandro wrote, while adding that incoming doses of different vaccines are often already earmarked for other phases.

“We hope this is only a brief delay.”

Residents of the two Alberta hot spots are among several priority groups across Canada who were looking forward to the promise of J&J shipments next week.

“Like other communities, we will wait our turn and remain vigilant in following all health protocols to stop the spread until everyone is immunized,” Sorensen said.

The Emergent Biosolutions facility in Baltimore was recently cited by the U.S. Food and Drug Administration for violations including cleaning and sterilization failures, the potential for cross-contamination and failure to follow required protocols.

Health Canada had already cleared 1.5 million doses of the Oxford-AstraZeneca vaccine made at the facility, but did not think the Canadian J&J doses had any connection to that plant.

Health Canada now says the drug substance that makes up part of the J&J vaccine was actually produced there and then shipped elsewhere for the vaccines to be completed.

Word of the delay came hours before a number of COVID-19 hot spots reported continued high case counts and troubling virus-related hospitalization rates, though there were signs of hope in some jurisdictions.

While Ontario recorded 900 patients in its intensive care units for the first time since the onset of the pandemic, overall hospitalizations dipped slightly to 2,152. The province recorded 3,369 new infections.

Public health experts in that province also called for urgent action after an independent commission’s report on the long-term care sector detailed devastating failures and found the province was ill-equipped to face COVID-19.

Hospitalizations also declined in Quebec for the fourth straight day, with the province reporting 578 patients seeking treatment for COVID-19. The province also added 1,101 new infections to its overall tally.

Nova Scotia recorded a single-day high for new cases with 148, though Premier Iain Rankin had warned residents of an impending spike as provincial laboratories work their way through a testing backlog.

Elsewhere in Atlantic Canada, Newfoundland and Labrador reported five new cases. New Brunswick counted 18, of which a dozen were in the Edmunston region where a lockdown was partially lifted this week.

Manitoba counted 273 infections and Saskatchewan wasn’t far behind with 262.

The J&J vaccine has not been administered in Canada so far, and the National Advisory Committee on Immunization hasn’t yet provided guidance on how they think it should be used.

However, several provinces already made plans for the expected doses, including Alberta, where Premier Jason Kenney said they would be directed to hot spots.

Quebec’s public health director Horacio Arruda said he expected the 67,000 doses of J&J vaccine destined for the province would only be given to people over 45, same as for the Oxford-AstraZeneca vaccine.

“This is a single dose vaccine and it’s fridge stable once it’s been thawed and repackaged and shipped to us, so that gives us some flexibility in targeting certain populations, particularly people who may be challenging to find for Dose 2,” Henry said last Monday.

“Regardless of vaccination status, as infection rates remain high, it is essential that we all continue to follow public health advice and keep up with individual precautions to help stop the rapid spread of COVID-19 in our communities,” she said in a tweet.