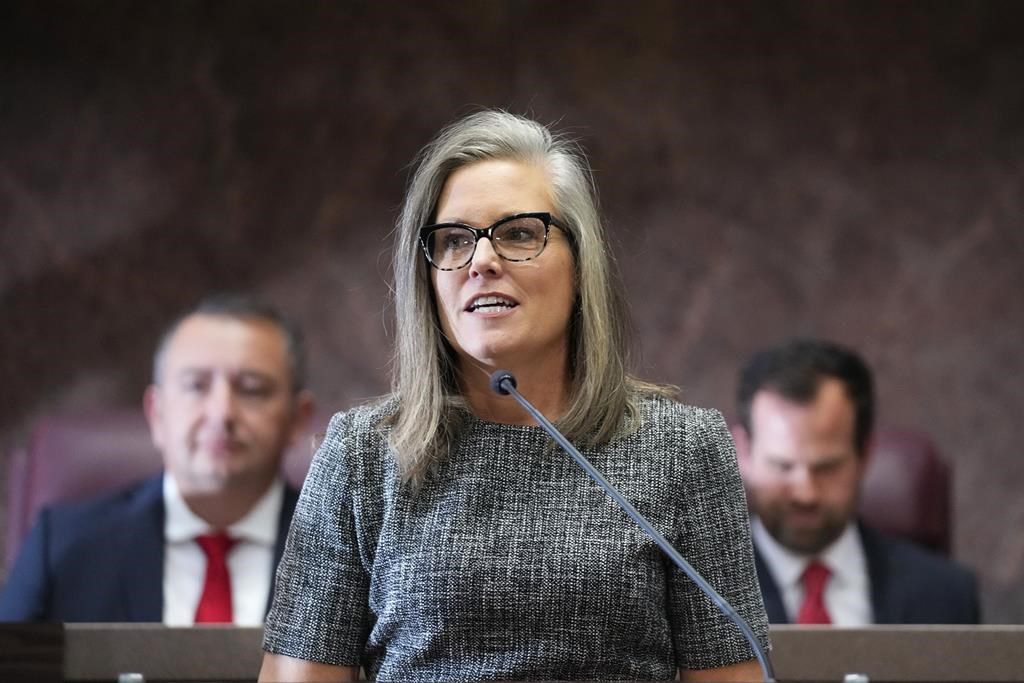 PHOENIX (AP) — Arizona’s new governor has ordered a review of the state’s death penalty protocols due to its history of mismanaging executions, leading the state’s attorney general to hold off on seeking executions until the examination is completed.

The review ordered Friday by Gov. Katie Hobbs, Arizona’s first Democratic governor since 2009, came as the state’s new Democratic attorney general, Kris Mayes, withdrew her Republican predecessor’s request for a warrant to execute a convicted killer who initially asked to be executed but later backed out of that request. While Hobbs’ order didn’t declare a moratorium on the death penalty, Mayes will not seek court orders to execute prisoners while the review is underway, said Mayes spokesperson Richie Taylor. The review comes just days after the governor appointed Ryan Thornell, a prison official in Maine, as Arizona’s new corrections director.

“With the Arizona Department of Corrections, Rehabilitation and Reentry now under new leadership, it’s time to address the fact that this is a system that needs better oversight on numerous fronts,” Hobbs said.

The review will examine, among other things, the state’s procurement process for lethal injection drugs and lethal gas, execution procedures, the access of news organizations to executions and the training of staff to carry out executions.

Arizona, which currently has 110 prisoners on death row, carried out three executions last year after a nearly eight-year hiatus that was brought on by criticism that a 2014 execution was botched and because of difficulties obtaining execution drugs.

Since resuming executions, the state has been criticized for taking too long to insert an IV into a condemned prisoner’s body in early May and for denying the Arizona Republic newspaper’s request to witness the last three executions.

“These problems go back more than a decade,” said Dale Baich, a former federal public defender who teaches death penalty law at Arizona State University. “The department of corrections, the governor and the attorney general (in past administrations) ignored the issues and refused to take a careful look at the problems. Gov. Hobbs and Attorney General Mayes should be commended for taking this matter seriously.”

On Friday, Mayes withdrew a motion made by her Republican predecessor Mark Brnovich for a warrant for the execution of Aaron Gunches, who was first sentenced to death in 2008 for killing his girlfriend’s ex-husband. Gunches earlier this month withdrew his request to be executed, citing recent executions he said amounted to “torture.”

“These circumstances have now changed,” Mayes said. “However, that is not the only reason I am now requesting the previous motion be withdrawn,” Mayes said. “A thorough review of Arizona’s protocols and processes governing capital punishment is needed.”

The state’s nearly eight-year hiatus came after a 2014 execution in which Joseph Wood was injected with 15 doses of a two-drug combination over two hours, leading the death-row prisoner to snort repeatedly and gasp more than 600 times before he died. His lawyers said the execution was botched.

In the past, Arizona and other state had struggled to buy execution drugs after U.S. and European pharmaceutical companies began blocking the use of their products in lethal injections.

In July 2015, the state tried to import sodium thiopental, which had been used to carry out executions but was no longer manufactured by companies approved by the U.S. Food and Drug Administration. The state never received the shipment because federal agents stopped it at the Phoenix airport, and the state lost an administrative challenge to the seizure.

Arizona is the only state to currently have a working gas chamber.

The last lethal gas execution in the United States was carried out in Arizona more than two decades ago. The state refurbished its gas chamber in late 2020. Corrections officials had declined to say why they restarted the gas chamber.

All three prisoners executed in Arizona last year declined lethal gas, leading them to be put to death by injection, the default execution method.