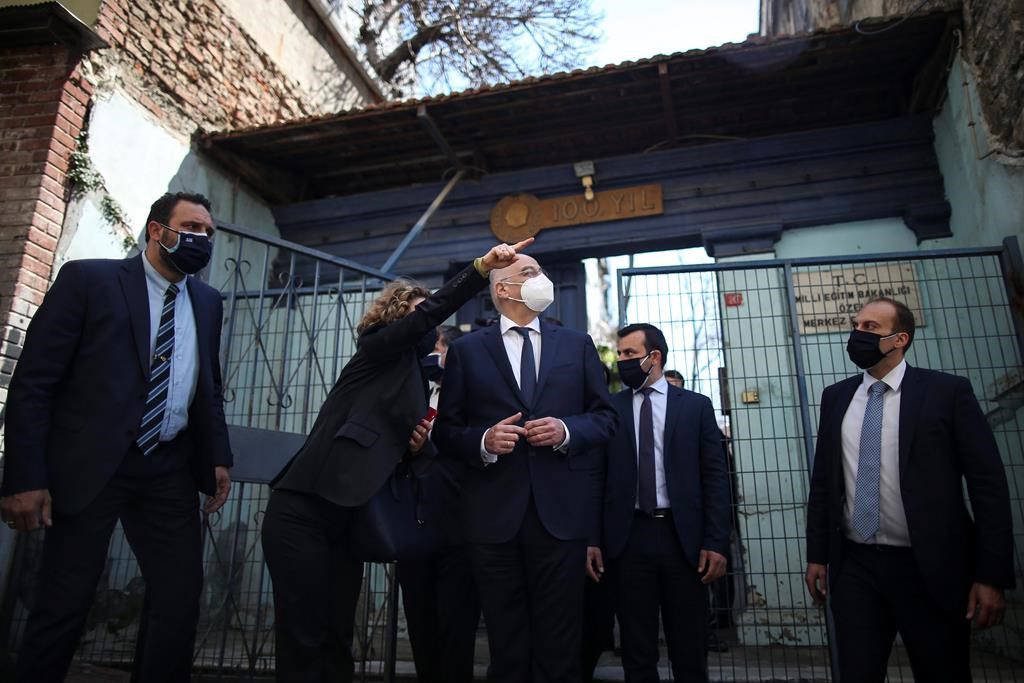 ANKARA, Turkey â€” Greece’s foreign minister travels to Ankara on Thursday for talks on the two NATO allies' fraught relationship, following a slight easing of tensions between the neighbours.

In an indication of the meeting’s importance, Greek Foreign Minister Nikos Dendias is to meet with President Recep Tayyip Erdogan as well as his counterpart, Mevlut Cavusoglu.

The visit is the first between the two nations following a tumultuous year. Angered by what it perceived to be a lack of support for its policies in Syria, Turkey announced last year that it was opening its western borders, prompting thousands of migrants to gather at entry points to Greece, which promptly closed them down. This led to chaotic scenes at the frontier.

Tension flared again in the summer over maritime boundaries and energy exploration rights in the eastern Mediterranean, leading to a military buildup that featured warships from the two countries facing off. The dispute strained Ankara's relations with the whole European Union.

Tensions eased after Turkey pulled back its energy research vessel and adopted a more conciliatory tone toward Greece and other EU nations.

Turkish and Greek diplomats have since met in Istanbul and Athens, resuming a series of meetings designed to build trust between the historic regional rivals. The two NATO allies have been at odds over decades-old issues including the extent of air and maritime boundaries in the Aegean Sea and the future of ethnically split Cyprus. They have come to the brink of war three times since the 1970s.

"We are prepared to discuss all of our issues with Greece," Cavusoglu told Turkey's NTV television on Thursday. "Of course it is not possible to resolve all of the issues in one meeting â€” or in multiple meetings â€” but at least a positive atmosphere (is being) created and we can work out the ways in which we can resolve the existing problems."

In Athens, Greek government spokeswoman Aristotelia Peloni said Greece has frequently said it seeks the de-escalation of tension with Turkey and that this continues to be true.

Peloni said that during Dendias's visit to Turkey, "we will put forward our positions on all issues, bilateral and Euro-Turkish. We are always in favour of maintaining open channels of communication."

Turkey and Greece have also traded accusations over unauthorized migration. The Turkish coast guard, as well as numerous refugee rights organizations, have accused the Greek coast guard of conducting pushbacks â€” illegal summary deportations â€” by returning their boats to Turkey without allowing them to apply for asylum in Greece.

Greece denies it carries out pushbacks and accuses Turkey of failing to crack down on migrant smugglers operating from its shores.