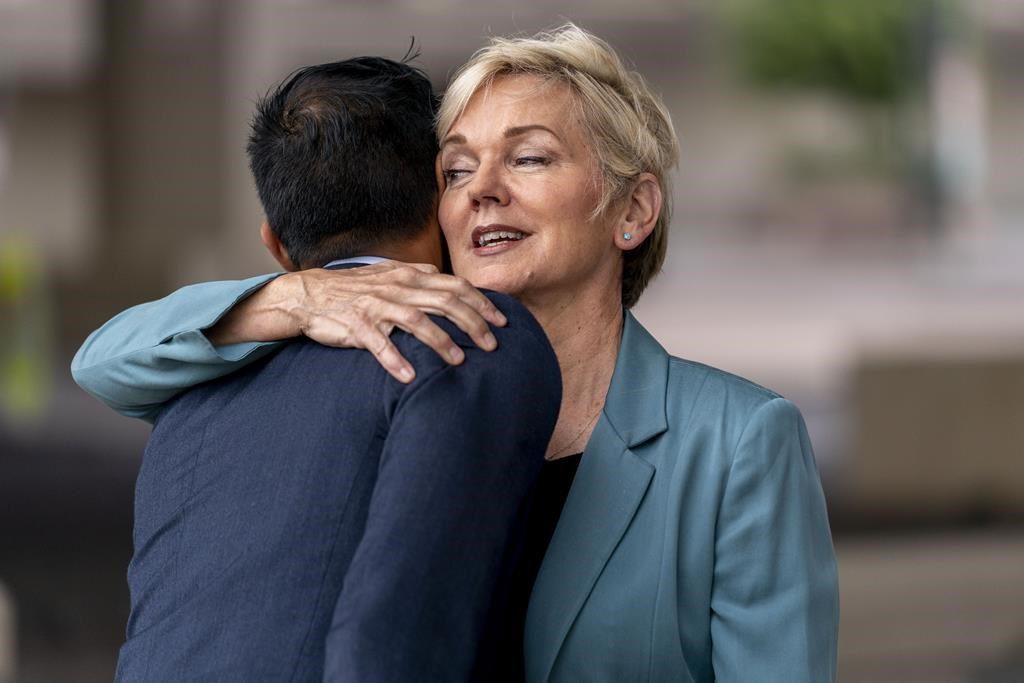 CHARLESTON, W.Va. (AP) — Energy Secretary Jennifer Granholm joined a key member of the U.S. Senate in West Virginia on Thursday to promote the role that the once-booming coal-producing state will play in the development of clean energy.

Sen. Joe Manchin and Granholm were joined at a news conference in Morgantown with partners in a collaboration to build a ship, in part using steel manufactured in landlocked West Virginia, to transport parts for U.S. offshore wind development projects.

“This is sort of a window into the opportunity for West Virginia to be a leader in the energy of the future, in addition to having led the energy that got us here and that still powers us,” Granholm said.

The so-called Jones Act prohibits foreign-flagged ships from hauling cargo between U.S. ports. So the Danish company Orsted is teaming with Steel of West Virginia and energy providers Eversource and Dominion Energy on construction of a 470-foot (143-meter) ship that will transport and install towers for wind projects off the Atlantic coast, Granholm said.

Granholm’s presence was the latest sign from the Biden administration in drawing attention to Manchin, a moderate Democrat who has urged an effort at bipartisanship to pass the president’s $2.3 trillion infrastructure plan. First lady Jill Biden joined Manchin at a coronavirus vaccination clinic last month, a few days after Manchin met at the White House with the president on the infrastructure plan.

The nation’s second-largest coal producer, West Virginia has lost 56% of its mining jobs since 2009 as power plants turn toward renewable energy sources. Because in part of those jobs lost, West Virginia lost the highest percentage of its population of any state in the past decade.

“We have a golden opportunity now with the new infrastructure bill coming that energy is going to play such an important part, and how we can lead in the world in a clean energy transformation,” Manchin said. “It’s really what it’s all about. You cannot eliminate your way to a cleaner climate. You can innovate your way.”

On Tuesday, President Joe Biden appeared to make a veiled reference to Manchin and Sen. Kyrsten Sinema of Arizona when he responded to a question about why he hasn’t been able to get a wide-reaching voting rights bill passed.

Both senators have frustrated Democrats with their defense of the filibuster — the rule requiring most legislation to win 60 votes to pass, making many of Democrats’ biggest priorities like voting rights and gun control bills dead on arrival in the 50-50 Senate.

During her two-day visit to West Virginia, Granholm, a former Michigan governor, also is scheduled to tour an underground coal mine and a rare earth elements lab. The stop comes two days after she was in Houston to tout Biden’s American Jobs Plan.

“The reason why I’m here, the reason why I went to Houston, which are fossil fuel communities, is to say it’s great that you have gotten us here, and thank you for that,” Granholm said. “But now, take us to the next wave, the next leg, which is this clean energy future, and be a part of that.”