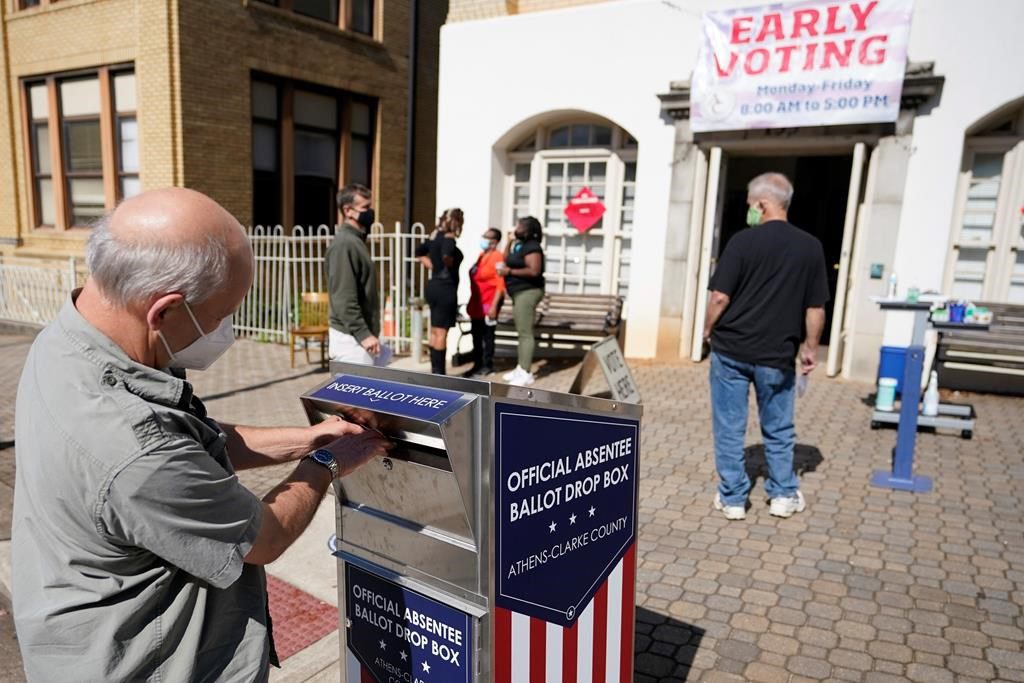 Atlanta-area voters looking to return their ballots using a drop box in next year's gubernatorial election will have to do some searching.

Just eight boxes will be spread across Fulton County's nearly 529 square miles â€” or about one for every 100,000 registered voters. That's down from the 38 drop boxes that were available to voters last fall. It's the result of a broad new law pushed by Georgia Republicans in response to former President Donald Trump's false claims of a stolen election.

Georgia is one of several states controlled politically by Republicans that are seeking additional restrictions on voting, citing security concerns. A favourite target is ballot drop boxes, which have been used for years in states with expansive mail voting and which millions of voters used last year as a way to avoid polling places during the pandemic.

Democrats say the boxes are more secure than regular mailboxes, and their use was largely trouble-free last fall. Even Georgia Gov. Brian Kemp, a Republican who signed the restrictive bill into law, posted a video on his Twitter account that showed him using a drop box to cast his ballot last year, flashing a thumbs up sign afterward.

For election officials and voters across the country, drop boxes seemed like an ideal solution to two major problems in 2020: a coronavirus pandemic that raised fears about crowded polling places and reports of mail delays that threatened on-time delivery of ballots.

The boxes were targeted a few times by vandals, but few other problems were reported across the country. Even so, Republicans say they want to ensure the boxes will be a secure way to cast a ballot.

"It's a continued narrative where you try to pit security against accessibility, and you have to choose one or the other," said Hillary Hall, a former county elections clerk in Colorado who now works with election officials across the country through the National Vote at Home Institute. "It's a false choice."

Drop boxes have been used for years in states such as Colorado, Oregon and Washington, where ballots are mailed to all registered voters ahead of every election.

Placement can vary widely. In some places, they’re located inside public buildings, available only during office hours. Elsewhere, they are outside and accessible at any hour, typically with video surveillance or someone monitoring in-person.

“I'm just so glad we had that option," said Cynthia Vaughn, a retired financial manager from Atlanta who used a drop box at her local library in November and again for the state's January Senate runoff.

She said slashing access to them will be especially hard on those who don’t have ready access to a vehicle or public transit: "Driving extra miles to get somewhere to drop off a ballot doesn't adhere to the whole point that it should be easy and accommodating for everyone to vote.”

They were so popular in Florida last year that nearly 1.5 million voters used them, according to Florida Supervisors of Elections, a statewide group of local election officials. Even so, a bill pending in the Florida Senate would limit their use to hours when in-person early voting is offered. An earlier version would have eliminated them entirely, but that was revised after election supervisors opposed it.

The bill’s sponsor, Republican Sen. Dennis Baxley, acknowledged during a legislative hearing that he was not aware of any problems with drop boxes in Florida last year. Nevertheless, he said they introduced security gaps into the state's mail voting process that must be closed.

"I don't think we should sit on our laurels or congratulate ourselves on a successful election," Baxley said. "Our time is better spent learning lessons from problems in other states to make sure we are prepared for 2022 and beyond."

Democrats complained the bill would preclude voters from dropping off ballots in the days just before an election, when early voting is no longer available and voters are worried about relying on the U.S. Postal Service to deliver their ballots on time.

Republican lawmakers in other states, including Michigan and Wisconsin, also have proposed new limits, though the chances of many of them becoming law are slim because Democrats control the governor’s offices.

As part of a broad GOP-led election overhaul in Iowa this year, lawmakers approved legislation to limit drop boxes in future elections to just one per county. Previously, state law did not say how many drop boxes counties could operate. Lawmakers in Texas, where the GOP is in full control, also are debating how voters can return ballots.

Election experts say outdoor drop boxes are arguably more secure than a regular U.S. Postal Service mailbox sitting on a sidewalk, especially when video surveillance is used. They are typically large, heavy and anchored to the ground.

In Georgia, drop boxes were permitted last year under an emergency rule prompted by the coronavirus pandemic. State Republicans have defended the new law as making drop boxes a permanent option for voters and requiring all counties to have at least one. But critics say the new limits mean there will be fewer drop boxes available in the state's most populous communities.

"There weren't any issues with the drop boxes, and that's the point," said Georgia Sen. Jen Jordan, a Democrat whose district includes parts of Fulton County. "It's definitely going to impact voters and their ability to access the ballot and cast their vote."

In fast-growing Cobb County north of Atlanta, officials had 16 drop boxes available in November but will be permitted about five under the new law. Janine Eveler, the county's elections director, said 60% of all returned absentee ballots last fall came through a drop box.

For the entire metro Atlanta area, Democrats estimate the number of drop boxes will fall from 94 last year to no more than 23 for future elections based on the new formula of one drop box per 100,000 registered voters.

Republican Sen. Brian Strickland, whose district sits south of Atlanta, said lawmakers were focused on making sure drop boxes were written into the law, available for future elections with strong security measures in place.

"If the provision we have is not workable â€” this is the first time we have tried this â€” I'm sure you will see us go back and amend that to allow additional drop boxes if more are needed," he said.

Christina A. Cassidy, The Associated Press