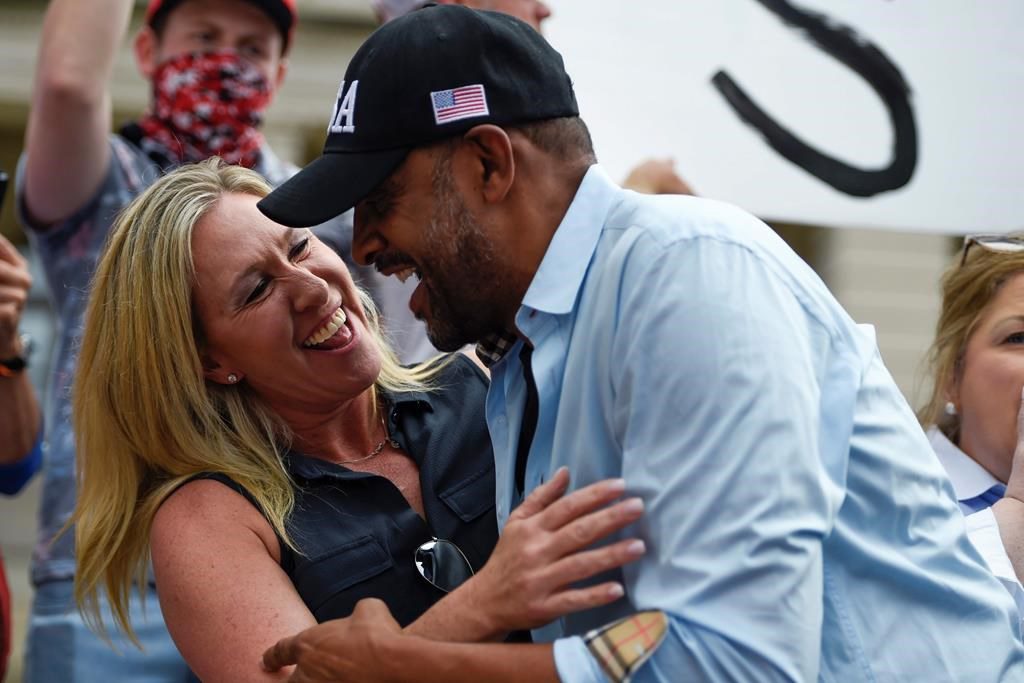 ATLANTA â€” Former Democrat Vernon Jones crowd-surfed across adoring Trump supporters in October after speaking at one of the former president’s campaign rallies.

Now the scandal-plagued politician hopes to surf Trump supporters’ discontent with Gov. Brian Kemp to the Republican nomination. Jones announced Friday that he would challenge the incumbent governor in 2022.

Jones was a state representative on the outs with his party when he shot to prominence in Republican media circles as an African American Democrat who endorsed Donald Trump’s reelection campaign. He stayed in the spotlight as a top proponent of the baseless claim that the 2020 presidential election was stolen from him by fraud.

Jones, 60, served multiple terms in the Georgia House, sandwiching a troubled turn in charge of Atlanta’s suburban DeKalb County, before proclaiming himself a Republican in January as his last term in the legislature expired. "I have left the plantation," he declared when he switched parties.

He’s kept up a steady stream of fire on the governor since then. Last week, he tweeted that Kemp "still hasn't discontinued the use of Dominion voting machines in the state of Georgia. I'll do it on Day One," alluding to unproven claims that the machines somehow improperly attributed Trump votes to Democrat Joe Biden.

Jones has been posting video and pictures of himself interacting with Trump at his Mar-a-Lago club in Florida in recent weeks. But it's unclear whether Trump will support him. Trump remains fixated on Georgia, but has also encouraged others to run in the Republican primary.

For Jones, the race is the latest in a long career of a self-described "country boy" who went on to be DeKalb’s first African American elected leader. Every step of the way, Jones has been dogged by serious questions about which side of the law he’s lived on, and which party he wanted to be in.

Jones had long flirted with the GOP, getting endorsed by the DeKalb County Republican Party in 2000 when he was first elected the county’s CEO and saying he voted for George W. Bush in both 2000 and 2004.

As the county’s top officer, he faced multiple investigations of an expensive security detail, and a woman accused Jones of raping her in late 2004. She later dropped the charges, saying she didn’t want to face the scrutiny, but never recanted. Jones denied wrongdoing, saying their sexual encounter was consensual.

Jones also oversaw hundreds of millions in capital projects as CEO, but a special grand jury later found he was part of an endemic culture of "incompetence, patronage, fraud and cronyism."

"Vernon Jones has historically been a very effective campaigner, so you can’t underestimate him," said state Rep. Mary Margaret Oliver, a Democrat from Decatur who has long tangled with Jones. "However the likelihood of him running an honest and well-respected administration with competent staffers is remote."

Jones ran for U.S. Senate in 2008, but lost a Democratic runoff in part because he lost his home county. He later lost races for U.S. House and county sheriff before returning to the state House.

Those close to Kemp acknowledge that a portion of the conservative base is skeptical and even angry. But they see Jones' candidacy as perhaps the best kind of primary challenge an incumbent could get. Jones is credible enough to require an early, energetic campaign effort from Kemp, they argue, but he doesn't necessarily give Republican primary voters such an established, high-profile alternative as former U.S. Rep. Doug Collins, who has topped the wishlist of Trump supporters.

"The strategic move for the governor's team, the governor's supporters is to remind grassroots activists that he's been a champion for life, for economic growth and opportunity, expanding access to health and now leading the fight against cancel culture," said Ryan Mahoney, Kemp's top campaign consultant.

If the challenge from Jones helps Kemp raise more money and shore up his standing among the Republican base, that could help him in a potential general election matchup against Democrat Stacey Abrams, his advisors say.

Abrams, narrowly defeated by Kemp in 2018, hasn't announced her intentions but is widely expected to seek a rematch.

Georgia Republicans recognize that Abrams can raise money nationwide and won’t likely face significant primary opposition, leaving her with a flush campaign account and party unity that Kemp cannot yet be assured of, even as the incumbent.

The first test of Kemp's standing has already begun, as county Republican parties hold annual conventions. Trump allies are pushing resolutions of censure against the governor and Secretary of State Brad Raffensperger for their roles in certifying Biden’s narrow victory in Georgia.