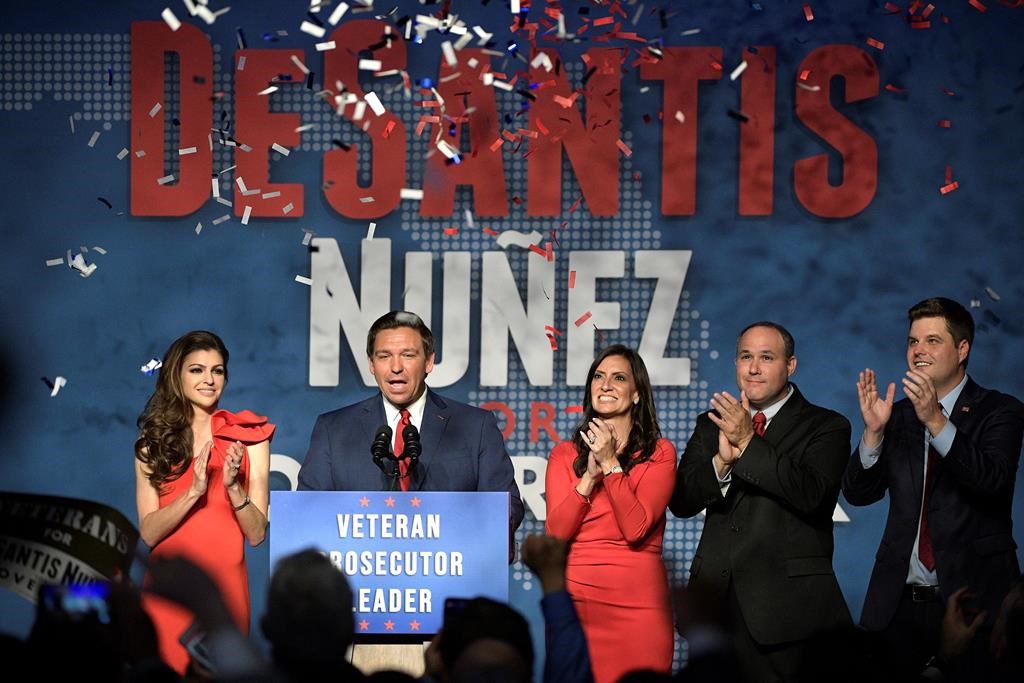 The 39-year-old congressman was largely unknown outside his Daytona Beach district. He didn't have the professional staff or fundraising prowess typically required to compete in such a large state. And he was going up against a more established rival for the Republican nomination.

But at his side, DeSantis had a key ally with strong connections in state politics and the respect of the White House: Matt Gaetz, the Florida congressman now embroiled in a federal sex trafficking investigation. Gaetz appeared at campaign events alongside DeSantis, played his Democratic rival Andrew Gillum in mock debate preparations and encouraged then-President Donald Trump to back DeSantis for governor.

At one campaign stop in Navarre, Florida, Gaetz jokingly referred to DeSantis as "Batman" to his "Robin."

There is no indication that DeSantis is tied to the federal probe of Gaetz, which has also ensnared several other prominent figures in Florida Republican politics. But the investigation could spark new scrutiny of their political partnership and become a liability for DeSantis as he runs for reelection ahead of a possible presidential bid in 2024.

The Associated Press spoke to nearly a dozen people with direct knowledge of how the DeSantis-Gaetz relationship evolved in recent years. Many of them spoke on condition of anonymity to discuss private conversations and observations. They describe a friendship of political convenience between two young, ambitious Republicans eager to rise in a party that was quickly being redefined by Trump.

Gaetz served as an informal political adviser to DeSantis. But as DeSantis became a more seasoned political player, the people said, the bond changed.

"When Ron first got elected governor, he did not have any experience in Tallahassee and Mr. Gaetz did, and so he relied on Mr. Gaetz for his Tallahassee knowledge when he first got there," said Peter Feaman, a national committeeman for the Republican Party of Florida. "Once Ron got his feet underneath him up in Tallahassee, the only thing they've had in common is their support for Mr. Trump and conservative principles. Other than that, I'm not aware of any interaction between the two whatsoever."

Government agents are investigating whether Gaetz had sex with a 17-year-old and other underage girls and violated federal sex trafficking laws, people familiar with the probe have told the AP. No charges have been filed, and Gaetz has vehemently denied the allegations. The governor has not been accused of any wrongdoing.

Still, the investigation may be moving uncomfortably close to the governor’s office. Besides Gaetz himself, the influential Florida political figures under federal scrutiny include Jason Pirozzolo, a hand surgeon and DeSantis campaign donor, and DeSantis’ political appointee Halsey Beshears, the state's former top business regulator.

Asked specifically whether DeSantis or his staff had been questioned as part of the investigation, the governor’s spokesperson Meredith Beatrice said: "This is an ongoing DOJ investigation. We have no comment.”

DeSantis and Gaetz briefly overlapped in Congress. They were more frequent regulars at Fox News, where Gaetz was a recurring guest and DeSantis used a flood of appearances to gain momentum in the governor’s race.

Those Fox News appearances also helped DeSantis get on Trump’s radar. Gaetz built on that growing profile and was among the Republicans who encouraged Trump to endorse DeSantis in the GOP primary. Trump’s ultimate backing unleashed a flood of fundraising dollars that put DeSantis on a path to victory.

Throughout the campaign, Gaetz was a steady presence. He was among those on stage with DeSantis when he was declared the winner in the governor’s race.

After the victory, Gaetz was one of just four chairmen â€” and the only current elected official â€” to lead DeSantis’ transition team. Gaetz, who spent six years in the Florida legislature, advised the governor-elect on hiring and policy decisions and appeared with him in public.

And as DeSantis began to fill out his administration, he tapped Gaetz’s father, former Florida Senate President Don Gaetz, to serve on a transition advisory committee on education and workforce development.

While the governor and the congressman were close politically, they were in very different places in their personal lives. DeSantis was married with young children. Gaetz was single.

Modest signs of tension began to emerge as DeSantis settled into the governor’s office.

One issue was Gaetz’s habit of showing up at Republican political events, often with different women, dressed as if they were going out to a nightclub. Critics suggested privately that Gaetz was acting like a "frat boy." DeSantis’ wife, Casey DeSantis, one of the governor’s closest political advisers, was cooling to Gaetz as well.

Trump, who remains deeply popular among many GOP voters, could hold significant sway over each man’s political future. While the former president is said to be fond of Gaetz and DeSantis, he has been more publicly aligned with the governor recently.

Over the weekend, DeSantis was the lone presidential prospect invited to share the stage with Trump at a private donor reception at Mar-a-Lago. Gaetz did not participate in the event, which was the party’s biggest formal gathering since Trump left office.

As the investigation unfolds, DeSantis is taking steps to position himself for higher office. He recently hired veteran Republican consultant Phil Cox to lead his reelection team as part of a significant political expansion. The team is so far staying hyperfocused on his 2022 reelection, but allies privately acknowledge that a strong showing next year will put DeSantis in a strong standing for the 2024 presidential contest.

Meanwhile, Gaetz is continuing to look out for DeSantis’ political ambitions â€” whether DeSantis wants him to or not.

Even as investigators were probing his activities this spring, Gaetz issued three separate press releases from his congressional office promoting DeSantis.

"He is a strong potential presidential candidate in 2024," Gaetz said he told Fox News, according to one of the official press releases. "The Biden team knows that, and so they're trying to somehow cast aspersions on the Florida experience because you know what, throughout America, there's a lot of Florida envy right now."