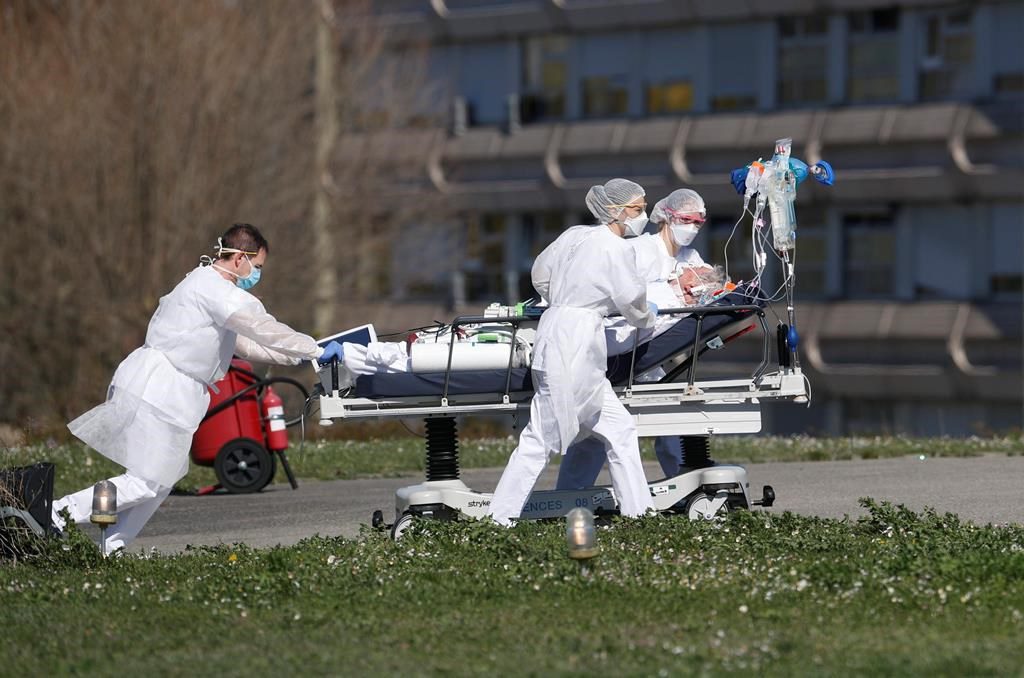 The country of 67 million will be the eighth in the world to reach the symbolic mark, and the third in Europe after the United Kingdom and Italy.

The cumulative death toll since the start of the epidemic totalled 99,777 on Wednesday evening. In recent days, French health authorities have been reporting about 300 new daily deaths from COVID-19.

Lionel Petitpas, president of the association "Victims of COVID-19," told the Associated Press that the number of 100,000 deaths is "an important threshold."

After months of people getting accustomed to the virus, the figure "is piercing a lot of minds. It is a figure we thought would never be reached," he said.

Petitpas, who lost his wife Joelle on March 29 last year from the virus, said families of victims “want the government to make a collective gesture to recognize our collective loss."

French President Emmanuel Macron told Le Parisien newspaper he thinks about all of the people who died in the pandemic and their families.

The pandemic was "so cruel" to individuals "who sometimes were not able to accompany, during the last moments and in death, a father, a mother, a loved one, a friend," Macron said. Yet the crisis also shows "the ability of the French people to get united," he added.

French government spokesperson Gabriel Attal suggested it is too soon to set a specific date to honour those who died as the country is now fighting another rapid rise in confirmed cases.

"There will be an homage for sure, a national mourning for the victims of COVID-19," Attal said Wednesday. "That time will come."

"Today, we throw all our forces in the battle against the epidemic," he said.

Experts say the 100,000 mark is an under-estimate, by at least several thousands. Analysis of death certificates shows that some COVID-19 cases are not reported when people die at home or in places like psychiatric units and chronic care facilities, they stress.

Petitpas started a Facebook group last year for families of victims to share memories of their loved ones. Nearly every day, new testimonies appear.

"My wife, like so many others, was just put in a body bag,” he recalled. “It was like a luxury garbage bag. And then she was put in a coffin and sent to cremation." He was not allowed to see her.

Petitpas said that despite a decree in January allowing people to see their deceased loved ones, many places still aren't allowing it.

"All these people who left us (are) like people with the plague, without human dignity, with nothing at all," he deplored.

Celia Prioux-Schwab, a social services worker, lost her 82-year-old grandmother in January, four days after she was sent home from the Reims hospital â€” even though her family had no home-care option, and she still had COVID-19.

She is now pushing for a change in French law to guarantee the right of families to visit hospitalized patients even during a pandemic, "to offer support, or even just to say goodbye.”

Corine Maysounabe, a journalist living in western France, has been involved in a working group advising officials on a future protocol for deaths during pandemics. She lost her 88-year-old father last year to the virus.

She described the "enormous trauma" of mourning rites being trampled on and bodies "treated at the level of objects."

"When you're told your father was put in a bag and covered in bleach: imagine the image you get in your head," she said.

Maysounabe feels families and victims "are forgotten" today. "We have gotten accustomed to 300, 400 deaths a day."

Since Macron declared "war" on the virus while announcing the country's first lockdown on March 17, 2020, the French went through domestic and travelling restrictions that have weighed heavily on everyday life.

France plunged into a third, partial lockdown at the beginning of April, as new infections were surging and hospitals getting close to saturation. The total number of COVID-19 patients in intensive care in France surged past 5,900 this week. Measures include school closure, a domestic travel ban and the shutting of most non-essential shops.

An overnight nationwide curfew has been in place since mid-December, and all France's restaurants, bars, gyms, cinemas and museums have been closed since October.

Schools are set to gradually reopen starting on April 26. The government is anticipating that other restrictions will start being lifted around mid-May, when the situation is expected to improve, Attal said.

President Macron is to hold on Thursday a meeting with government members to get the nation prepared for the gradual reopening. Authorities expects 20 million people, about 38% of the adult population, will have received at least one shot of vaccine by that time â€” up from 11 million now.

France is the country that has reported the largest number of confirmed infections in Europe, more than 5.1 million.