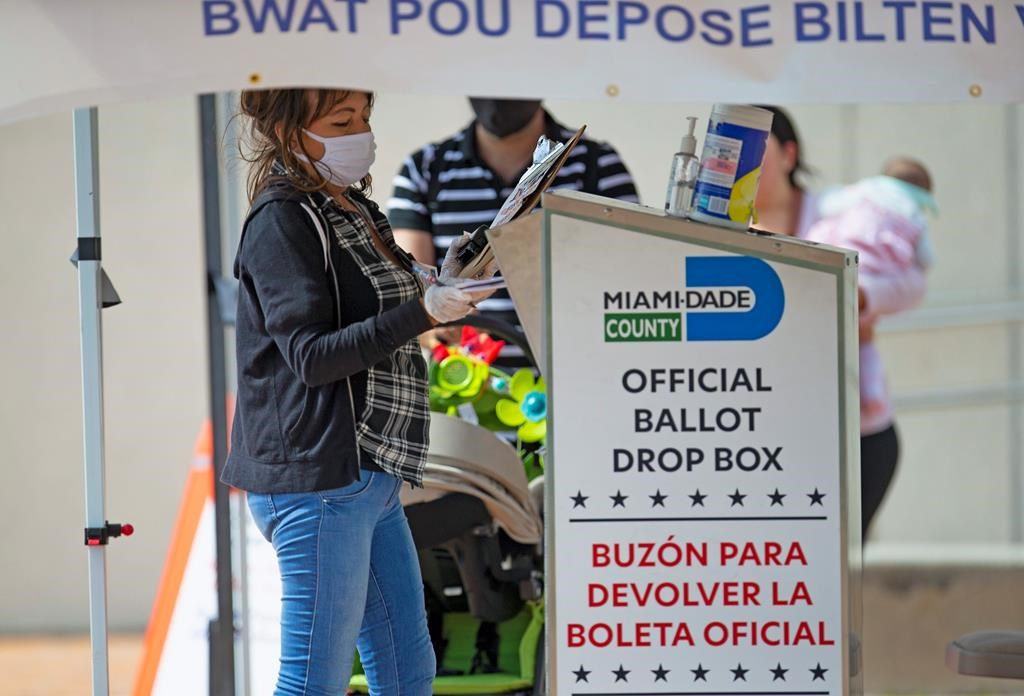 TALLAHASSEE, Fla. â€” In a state famed for election night fiascoes, Florida’s handling of the November presidential vote was hailed as a sign it finally got things right. Even so, Florida Republicans have drafted new rules on voting by mail, drop boxes and ballot handling that are raising an outcry.

Even as Florida basks in the glow of its chaos-free Election Night, its GOP-controlled legislature â€” still unsettled by November’s unproven claims of fraud â€” has responded by drafting voting changes that are raising alarm among Democrats and voter rights advocates.

Florida lawmakers passed an elections bill Thursday that may be far from a sweeping rewrite of voting rules. But the proposal is soon expected to become law and is helping to fuel a national debate over election integrity in some of the most crucial presidential battleground states.

It’s one of a wave of GOP-backed election bills being debated around the country after former President Donald Trump stoked false claims that fraud led to his 2020 election defeat. Opponents say such measures would disproportionately disenfranchise voters of colour, a complaint raised prominently last month in neighbouring Georgia, where GOP-led post-election voting changes caused an uproar. Refrains of "don’t Georgia my Florida" resonated among Democrats in the Sunshine State.

Republican Gov. Ron DeSantis, a potential 2024 presidential contender up for reelection next year, said he would sign Florida’s bill.

"We were proud of the election we ran, but obviously we want to stay ahead of the curve," DeSantis said Friday. "I don't know when they're gonna send it to me but obviously it's something I approve of and will sign it."

Republicans described their proposal as "guardrails" against fraud, restricting when ballot drop boxes can be used and who can collect ballots â€” and how many. To protect against so called "ballot harvesting," an electoral Good Samaritan can only collect and return the ballots of immediate family and no more than two from unrelated people.

It would add another layer of security by requiring identification, possibly a partial Social Security Number, to the usually routine process of changing voter registration information.

Republicans point to an incident last fall when a Florida man was arrested on accusations of changing the governor’s voter registration record without authorization.

And under the new rules, drop boxes would only be available when elections offices and early voting sites are open – with mandatory supervision.

"We’ve looked across the nation and we've seen things where ballot boxes can be tampered with," said GOP state Sen. Travis Hutson, who helped carry the bill forward. Elections officials in Florida noted, however, that they knew of no widespread problems with drop boxes in their state.

Florida's push to get more voters to cast ballots early or by mail meant lines on Election Day were shorter than usual. And even among a widely split electorate where emotions ran high, there were no reports of significant problems at its early or Election Day polling sites.

Fearful that the coronavirus pandemic would keep voters away on Election Day, Democrats campaigned especially hard to get more of their base to cast ballots by mail or deposit them in drop boxes, some of them available 24 hours a day.

Opponents call Florida's new legislation a partisan bid to recoup the GOP's lost advantage in voting by mail in Florida.

More than 11 million Floridians cast ballots in November, a record 4.8 million of them by mail. While Trump carried Florida by about 3%, the Democratic advantage in absentee voting proved worrisome to many Republicans.

In the end, Florida Democrats outvoted Republicans by mail by 680,000 more absentee ballots.

That has Democrats skeptical of their GOP counterparts.

"Is the priority to make it more difficult for Floridians to vote? Could it be because Democrats turned out in historic numbers using vote-by-mail?" asked Democratic state Sen. Annette Taddeo.

Democrats call the addition of new ID requirements deliberate Republican attempts to make the electoral process more inconvenient for Black and inexperienced voters, as well as those who might have difficulty getting to a polling place.

"The bill is different, but it still has barriers and hurdles for our people with disabilities, our seniors and our communities of colour," said Rep. Tracie Davis, a Democrat who served as a deputy elections supervisor for Duval County.

State Sen. Joe Gruters, who chairs the Republican Party of Florida chair, contends that the proposals are merely acts of fine-tuning "to ensure that we have integrity in the system,” adding during floor debates that "this does nothing to suppress the vote."

The governor’s signature also would extend a no-influence zone to 150 feet (50 metres) around polling places. And elections officials would have to let candidates and other observers witness some key election night moments in the ballot-handling process. Any violations could prompt hefty fines.

A group representing the state’s 67 county elections officials never called for any of the changes, but its leader said his colleagues would dutifully follow any new requirements set in law.

"After days of debate, our hope is that the initial and unnecessary call for election reform will not detract from the confidence that was well-earned in 2020," said Craig Latimer, Hillsborough County supervisor of elections and the president of the Florida Supervisors of Elections.

Latimer had called for wider use of ballot drop boxes, even as Republicans curtailed their use to the same hours when early voting sites and elections offices are open. He said the legislation makes requesting vote-by-mail ballots â€” and returning those ballots â€” harder.

"We should be looking for cost-effective ways to expand their use, including the use of secure 24-hour drop boxes with camera surveillance. Instead, the new legislation prohibits that," said Latimer.

Susan MacManus, a professor emeritus of politics at the University of South Florida, predicted lawsuits are inevitable once the election bill becomes law.

"It’s very complex and has lots of elements to it," said MacManus of the Republican-drafted bill. "When one party has complete control, the other side is always suspicious of motives.”