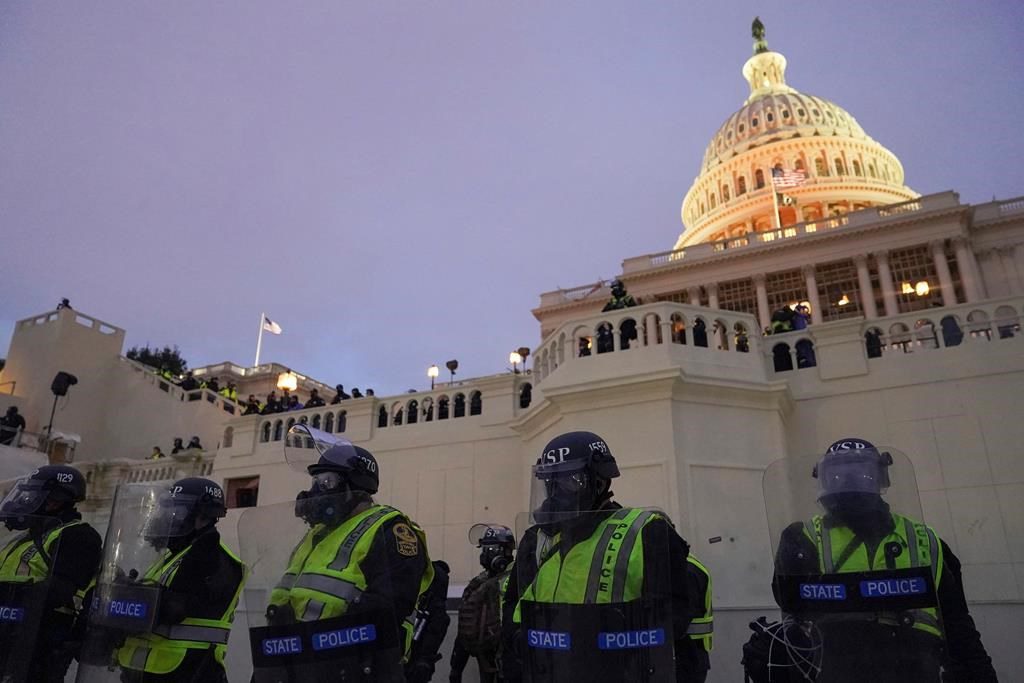 WASHINGTON â€” Federal authorities released videos Wednesday showing Capitol Police Officer Brian Sicknick, who died after defending the U.S. Capitol on Jan. 6, being attacked with a chemical spray as the pro-Trump mob descended on the building.

The videos were released after media outlets, including The Associated Press, went to court to demand that they be made available to the press. The Department of Justice late Tuesday withdrew its opposition to release the videos to the media outlets.

It comes as attorneys for the two men charged in the assault on Sicknick and other officers are fighting to be released from jail while they await trial. Lawyers for George Tanios and Julian Khater told a judge during a hearing this week that the two men don’t deserve to be behind bars while they fight the case.

Prosecutors at the hearing walked back their initial statements that the substance was bear spray, saying instead they now believe it was pepper spray.

"This is not a premeditated, planned event," said Joseph Tacopina, an attorney for Khater who argued the government was wrongly trying to paint his client to be a "felon hellbent on destroying democracy,” and said that his client was being treated as though he was the most aggressive of the bunch.

"Many defendants who have been charged with violent and aggressive behaviour have been released without any bail at all,” Tacopina argued.

A lawyer for Tanios called two witnesses who said he was a law-abiding father and business owner who did not deserve to be behind bars. Attorney Beth Gross said her client is on video trying to dissuade Khater from using any chemical irritants.

A judge did not immediately decide whether to release the men and set a second hearing for early May.

The footage is segmented into 10 clips and includes footage from cameras on poles and officers' body cameras. They show a close-up view of an angry mob yelling, "USA, USA!" and violently breaking past metal police barriers as officers try in vain to stop them. Khater is seen with his arm in the air, appearing to hold something, and then Sicknick turns away from the crowd and retreats. Another officer doubles over and uses her hand to cover her eyes.

Part of the body camera footage is slowed down to show the moments that Sicknick and another officer are sprayed. Other videos show Sicknick, who was wearing a blue jacket and bike helmet, on the upper terrace after the attack. Sicknick doubles over, his hands on his knees, then dumps water into his eyes. Another clip shows a different officer, her eyes shut in pain, saying she was struck right in the face, as someone dumps water into her eyes, and she is helped aside by officers.

The Washington medical examiner’s office this month found that Sicknick suffered a stroke and died from natural causes. The determination is likely to significantly inhibit the ability of federal prosecutors to bring homicide charges.

Prosecutors say before the attack Khater told Tanios, "Give me that bear sâ€”â€”" and reached into Tanios’ backpack. Tanios told Khater "not yet" because it was "still early," but Khater responded that "they just f—ing sprayed me." Khater was then seen holding a can of chemical spray, prosecutors say.

A prosecutor said during the hearing this week that it was likely Mace â€” not bear spray â€” that was sprayed at the officers.

Investigators initially believed Sicknick was hit in the head with a fire extinguisher, based on statements collected early in the investigation. And they later thought the 42-year-old Sicknick may have ingested a chemical substance that contributed to his death.

This story has been corrected to show that the Justice Department withdrew its opposition late Tuesday, not Wednesday.