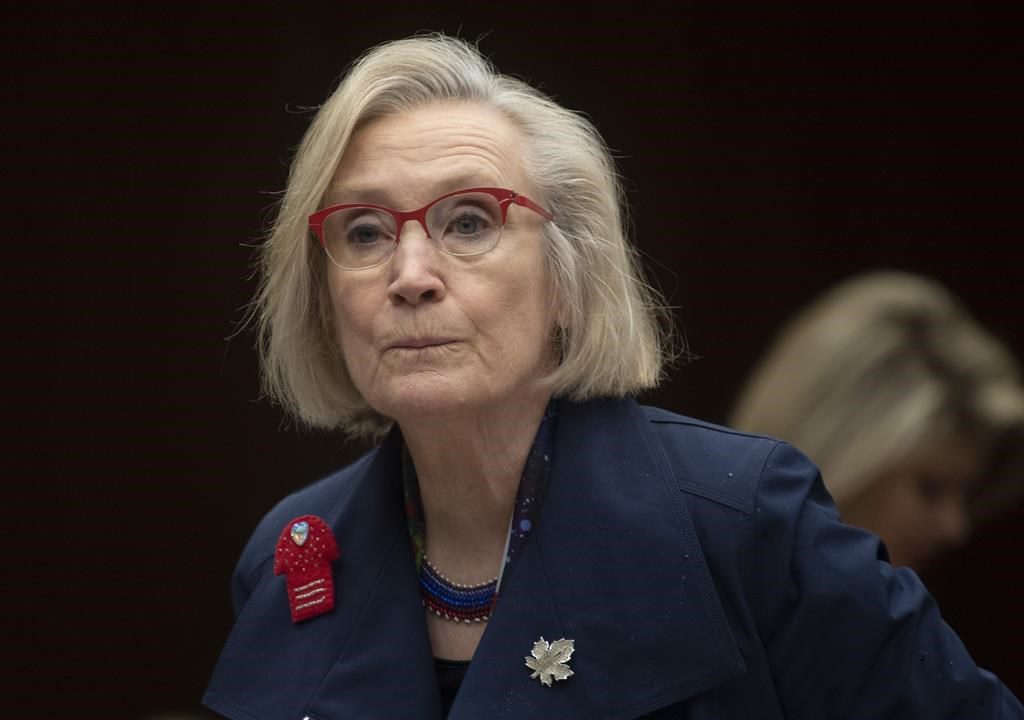 OTTAWA â€” Federal officials are facing calls for greater clarity on how a bill to harmonize Canada’s laws with the United Nations Declaration on the Rights of Indigenous Peoples could affect future development projects and government decisions.

Opposition MPs studying Bill C-15 have been pressing the Liberals on why they have not included a definition of a key article from the UN declaration that would compel Ottawa to obtain “free, prior and informed consent” from Indigenous Peoples on any decisions that affect their lands or rights.

Conservatives have raised concerns this provision would give First Nations a “veto” over development projects.

But Crown-Indigenous Relations Minister Carolyn Bennett says there is “complete consensus” from legal and Indigenous experts that this is not the case.

“For good projects to go forward, Indigenous people should be at the table at the original design of the project,” Bennett said Tuesday at a Commons committee hearing.

“We’re in a transition now where there are a number of projects that may have been seen as controversial, but this is what will provide the clarity going forward as to how this works.”

The UNDRIP bill would mandate the government to adopt a more inclusive approach, providing a framework for departments to give First Nations a shared role in decision-making in actions that affect their lives, lands, families and cultures.

Adopting and implementing the declaration was one of the 94 recommendations from the Truth and Reconciliation Commission â€” a sweeping probe of the legacy of residential schools in Canada. It was also one of the 231 calls for justice in the 2019 final report of the National Inquiry on Missing and Murdered Indigenous Women and Girls.

On Tuesday, Conservative, Bloc and NDP MPs bristled over a last-minute cancellation of Justice Minister David Lametti’s appearance at committee to answer questions on Bill C-15. The cancellation was due to a scheduling conflict, according to his office.

Conservative Crown-Indigenous relations critic Jamie Schmale said he wants more clarity on whether provincial and federal governments would retain final authority to make decisions on major projects if some, but not all, Indigenous rights holders disagree, as was the case with the recent Trans Mountain oil pipeline expansion.

Delivering a statement on Lametti’s behalf, Bennett explained C-15 is a “manifestation” of the right to self-determination for Indigenous Peoples and that “achieving consent should be the goal of any good faith consultation or collaboration process.”

“To be clear, the declaration does not confer a veto or require unanimity in these kinds of decisions. If consent cannot be secured, the facts and law applicable to the specific circumstances will determine the path forward.”

Adopting legislation recognizing the principles of UNDRIP would not change the duty to consult Indigenous groups, including measures adopted in the 2019 Impact Assessment Act, Bennett added.

“What (C-15) would do is encourage ongoing work to build on these types of arrangements and approaches.”

Pressed on whether she would personally support a more definitive interpretation of “free, prior and informed consent” in the bill, Bennett said she would “worry” about such a move.

A consensus would be needed among Indigenous partners co-developing the bill with the government on how to define this consent provision â€” something that has not been reached to date.

Calls from national Indigenous organizations, including the Assembly of First Nations, looking for changes to strengthen the bill and speed up an accompanying action plan to implement it are being taken “very seriously” Bennett added.

As for concerns raised by some Indigenous leaders and chiefs about whether the new law could erode or freeze existing Aboriginal land and treaty rights, they are unfounded, she said, reading from Lametti’s prepared remarks.

“To be clear, this provision does not seek to reinterpret or amend the rights in the declaration itself, it only confirms that this legislation cannot be used to derogate from the constitutional protections of section 35 rights, including treaty rights,” Lametti’s statement said.