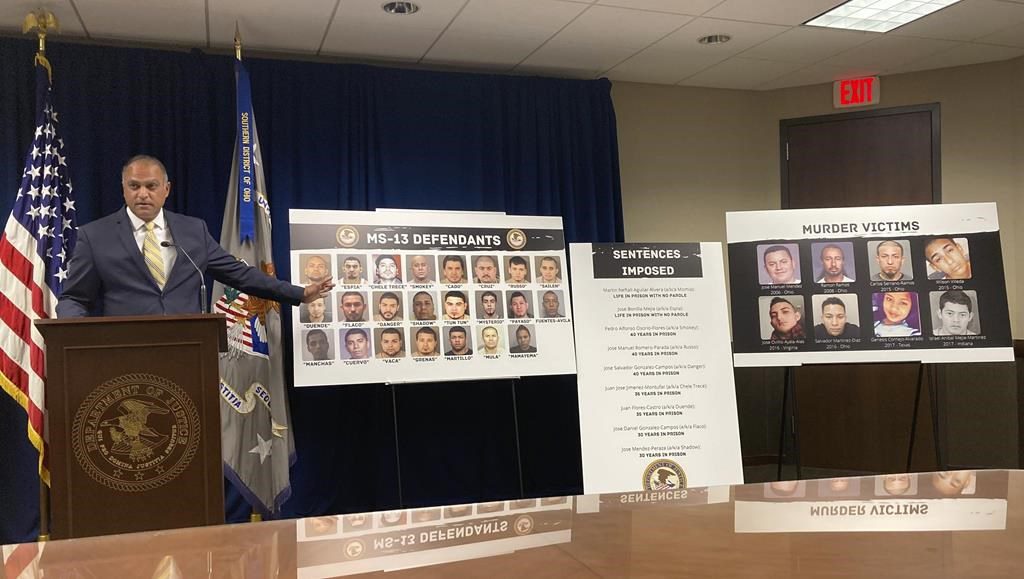 COLUMBUS, Ohio (AP) — A long-running investigation into an Ohio branch of the violent El Salvador-based MS-13 gang, including the solving of eight homicides, neared conclusion Thursday with the sentencing of the last defendant in custody, central Ohio’s top federal prosecutor announced.

Over the years, racketeering conspiracy charges against gang members have included murder, attempted murder, assault, drug trafficking, and money laundering. Among the victims were Wilson Villeda, a 17-year-old Columbus area high school student whose body was mutilated beyond recognition by machete-wielding assailants, and Genesis Lizbeth Cornejo-Alvarado, a 15-year-old girl shot to death in Texas for dating a rival gang member.

The prosecution of 23 members of the Columbus “clique” of MS-13 was the first federal case against the gang in the Midwest, said Vipal Patel, acting U.S. Attorney for the Southern District of Ohio.

Of those, 22 — including a 33-year-old gang member sentenced Thursday to more than three decades in prison — have been convicted. The last of the group is a fugitive in El Salvador.

Gang leader Martin Neftali Aguilar-Rivera was sentenced to life in prison in 2019.

The gang culture of MS-13 is far deadlier than U.S. gangs, with neither membership nor leaving the group an option, Menashe said Thursday.

“The trauma that they lived through that caused them to come here, literally, it’s nothing like I’d ever seen before,” Menashe said. “And nothing like gang culture within this country.”

That background does not excuse the defendants’ behavior, said Brian Martinez, an assistant U.S. attorney involved in the investigation. Most people fleeing Central American poverty and violence who come to the U.S. don’t make the choices these individuals did, he said.

“Nothing that ever happened to these individuals excuses the conduct to which they admitted in this case,” Martinez said. “And it is particularly insulting for them to bring to this community the very violence from which they claim to be escaping.”

Across the country, federal authorities have brought multiple charges against MS-13 members in recent years.

On Wednesday, the acting U.S. Attorney in Nashville announced that nine MS-13 members face charges alleging their involvement in killings, kidnappings, assaults, robberies and large-scale drug distribution in and around Nashville.

On July 20, an MS-13 member in Maryland was sentenced to 30 years in federal prison for his role in the killing of a 16-year-old boy who was stabbed and cut more than 100 times before his body was set on fire.

Authorities have also prosecuted MS-13 members for a series of killings on Long Island.