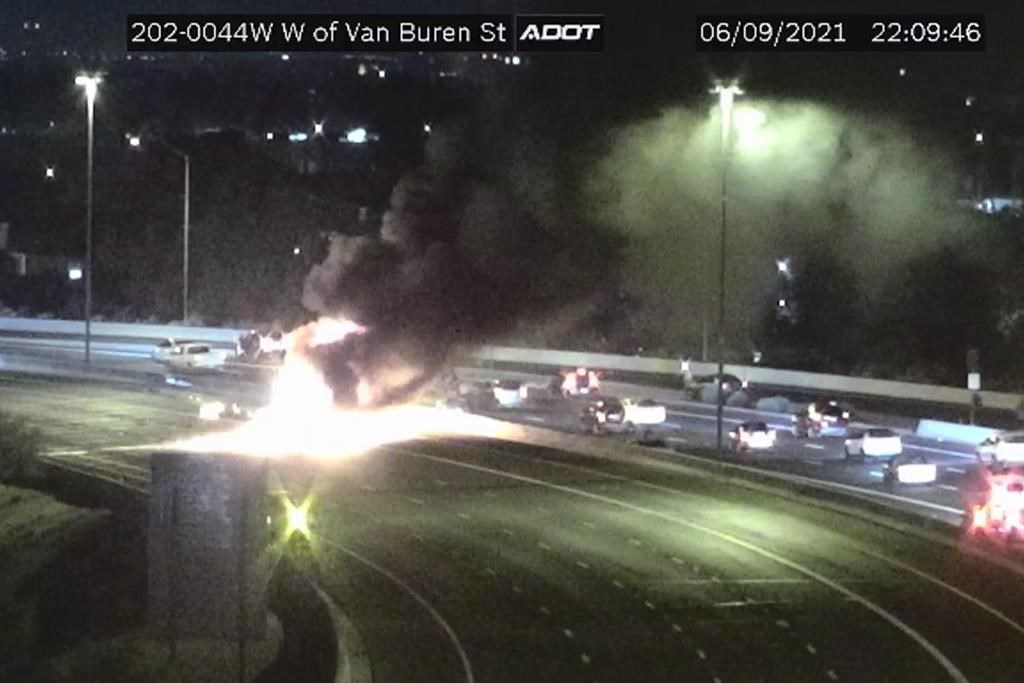 The wreck occurred late Wednesday after the tanker “failed to slow for traffic congestion,” the Arizona Department of Public Safety said in a statement.

The National Transportation Safety Board said it was sending nine investigators to conduct a safety probe into the crash in cooperation with the Arizona public safety department.

Among the issues that NTSB investigators will study is whether the crash could have been prevented if the tanker was equipped with electronic safety devices, said board spokesman Chris O’Neil. “Automatic emergency braking is definitely something we want to take a look at,” he said.

Six of the nine people injured in the crash were taken to hospitals in critical condition, the Phoenix Fire Department said a statement. The four men and two women ranged in age from 22 to 45. Details on the four people killed were not immediately released.

After the initial collisions, the trailer of the tanker rig separated and went over the freeway’s median wall and ended up on its side in the lanes going in the opposite direction, the state public safety department said.

At present, there are no federal requirements that semis have forward collision warning or automatic emergency braking, even though the systems are becoming common on smaller passenger vehicles.

The systems use cameras and sometimes radar to see objects in front of a vehicle, and they either warn the driver or slow and even stop the vehicle if it’s about to hit something.

In 2015, the NTSB recommended that manufacturers should immediately include the systems as standard equipment. At the time, the agency said the systems could prevent or mitigate more than 80% of the rear-end collisions that cause about 1,700 deaths and a half-million injuries annually.

Twenty automakers representing 99% of U.S. new-car sales signed a voluntary agreement with the government in 2016 to make the feature standard on all light vehicles by Sept. 1, 2022, and many companies are progressing toward that goal.

Investigators generally stay on the scene for five to 10 days, and they publish a preliminary report 30 to 90 days after finishing their field work. Investigations usually take 12 to 24 months to complete.