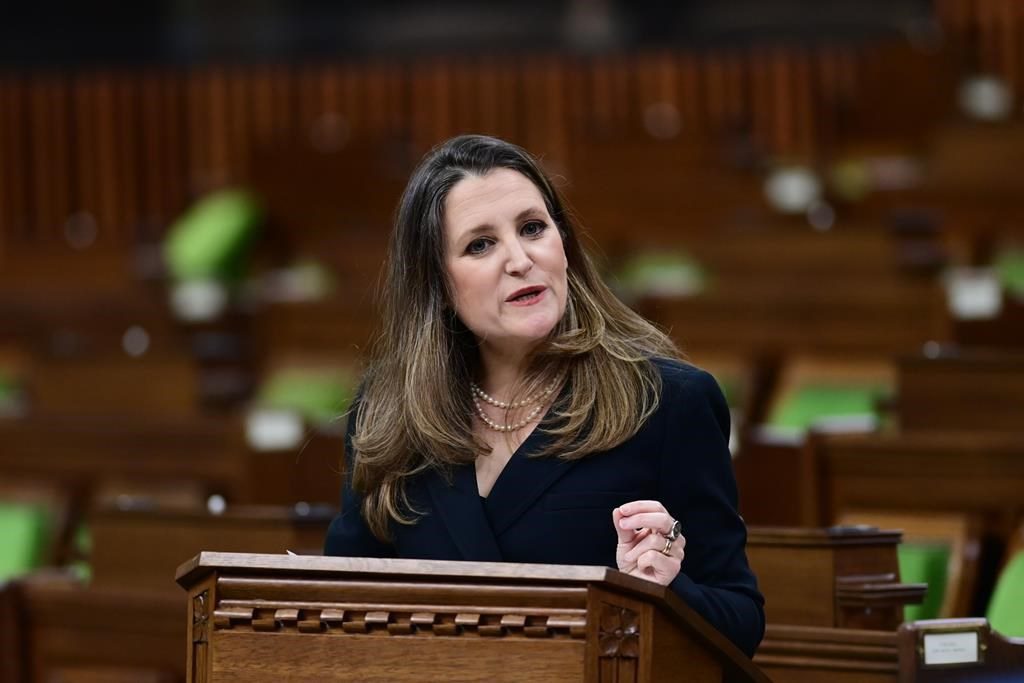 OTTAWA â€” The federal Liberal government plans to spend more than $18 billion over the next five years to try to narrow the socio-economic gap between Indigenous and non-Indigenous people and to help these communities fight the COVID-19 pandemic.

Finance Minister Chrystia Freeland said in her budget speech the government has made progress in righting the historic wrongs in Canada's relationship with Indigenous Peoples, but a lot of work remains to be done.

“It’s important to note that Indigenous Peoples have led the way in battling COVID,” Freeland said. “Their success is a credit to Indigenous leadership and self-governance.”

National Chief Perry Bellegarde of the Assembly of First Nations said the new budget is a move in the right direction but progress doesn’t mean parity.

“We need to maintain momentum to close the socio-economic gap that exists between First Nations and the rest of the Canadian society,” Bellegarde said in an interview with The Canadian Press.

In its 2021 budget blueprint, the government says the new funding for Indigenous Peoples will address inequalities they continue to face in Canada and advance reconciliation with First Nations, Inuit and the MÃ©tis.

The government says Indigenous communities have faced extraordinary health challenges since the start of the pandemic and continue to be vulnerable to the novel coronavirus and its variants.

The budget pledges to provide Indigenous communities with an additional $1.2 billion this fiscal year to support their response to the COVID-19 pandemic including money to hire nurses, provide mental health assistance, address food insecurity and support children.

Prime Minister Justin Trudeau’s government has announced more than $4 billion in COVID-19 funding for Indigenous communities and organizations supporting them since the beginning of the pandemic.â€¯

Part of Monday’s budget pledge is $1.4 billion over five years to maintain essential health-care services for First Nations and Inuit, to continue work to transform First Nations health systems and to respond to the health impacts of climate change.

The government promises to provide $1 billion over five years to increase funding under the First Nations child and family services program.

The budget also promises to invest an additional $2.2 billion over five years to address the roots of the tragedy of missing and murdered Indigenous women and girls.

The government proposes to spend more than $6 billion for infrastructure in Indigenous communities including funding for clean water projects, housing and other projects.

Trudeau's government has failed to deliver on its 2015 promise to end all drinking water advisories in First Nations communities by March 2021.

As of April 9, 52 long-term drinking water advisories remain in effect in 33 First Nation communities across the country.

The government says it's still committed to ending all remaining advisories, without providing a new deadline.

Bellegarde said Parliament has not yet passed Bill C-14 to implement the government’s fall economic statement, which included about $1.5 billion in funding to end drinking water advisories in First Nations.

“I would encourage all the MPs to get that bill passed as soon as possible. So that First Nations can have access to those resources to keep moving towards ending those 50-plus boil water advisories.”

Bellegarde also called on all parties to support the 2021 budget.

“If they don’t support it, there’s gonna be a (federal) election. I don’t think anybody is ready for (an election).”

Bellegarde said the government should maintain a strategy of investing in First Nations communities over the coming 10 to 15 years because First Nations are the fastest-growing segment of Canada’s population.

“You have an aging workforce in Canada, and you have to make sure that First Nations will have the skills and the training and education so that they can get good employment opportunities. And then that’ll help Canada’s overall economic growth.”