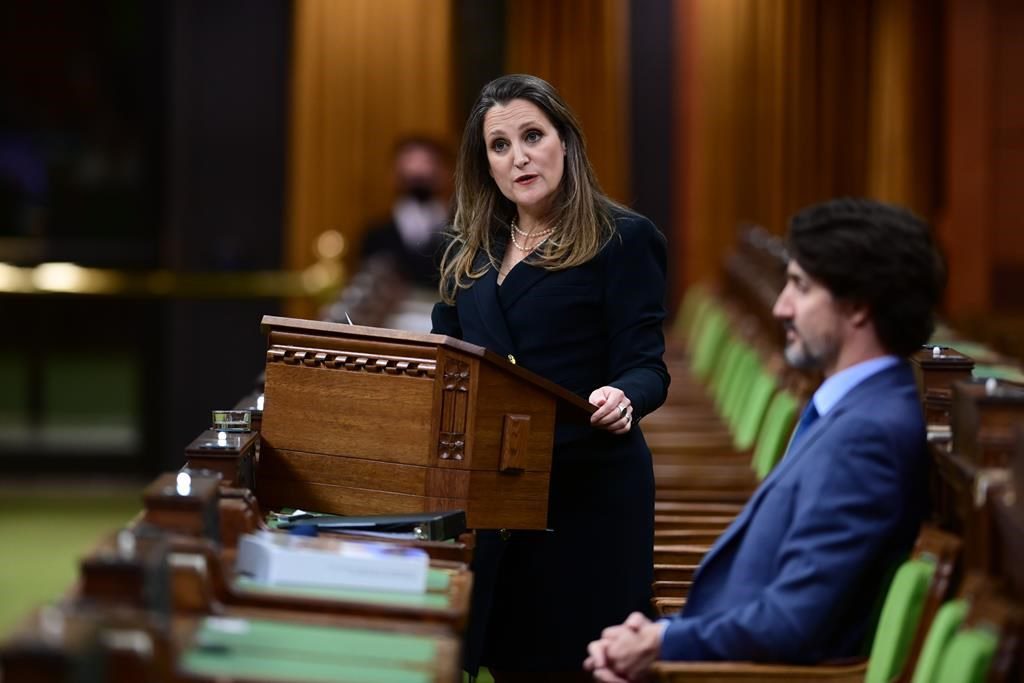 OTTAWA â€” Pushing the private sector to develop clean technology â€” and heavy emitters to adopt it â€” is where billions in new money will flow from the Liberals' 2021 budget pledge unveiled Monday to tackle climate change.

Around $17 billion is promised to be spent in the years ahead to promote a "green" recovery out of the COVID-19 pandemic and create jobs.

Included in that is $5 billion more into a fund meant to be spent on projects used by industry to reduce their greenhouse gas emissions.

The government says that will be spread out over seven years and is on top of the $3 billion announced when the Liberals unveiled their plan to reach net-zero emissions by 2050.

Sarah Petrevan, a policy director at Clean Energy Canada, says the total $8 billion will help heavy industries like steel and cement decarbonize and grow their competitiveness.

“Government’s role is to kind of set the stage for then private markets to develop and shift in the direction, and this is kind of what (Liberals) are doing,” she said of the budget.

“That’s the kind of thing that you have to do support an economic transition. It can’t all be government.”

Another measure targeting heavy emitters is a new tax incentive to encourage companies to adopt technology that traps carbon dioxide into the ground from fuel combustion instead of seeing it released into the atmosphere.

The government says it will soon begin consultations on designing a tax credit for capital spent on carbon capture and storage technology in hopes of increasing how many million tonnes Canada traps annually.

Stewart Elgie, a law and economics professor at the University of Ottawa, says carbon capture is one of the important low-carbon technologies the Liberals have honed in on, same with hydrogen, but there are others also needing support.

“The recovery from the last economic downturn led to record global increases in greenhouse gas emissions, so it’s really important that we don’t repeat that mistake.”

Making the country a hub for clean technology is among the priorities Prime Minister Justin Trudeau has outlined in his approach to climate. The Liberals also want to adopt policies that make Canada go over and above its international commitment to reduce greenhouse gas emissions by 30 per cent below 2005 levels by 2030.

"I don't see a big ambitious program that will lead us to zero emissions with strict targets," said Genevieve Tellier of the University of Ottawa, who focuses on budget policies and public finances.

She added a lot of the new climate spending comes in the form of grants, so it's being left up to private businesses to come to government with ideas.

Tellier suggests that’s not likely to woo potential voters who want to see more action on climate change if the minority Parliament heads into an election.

Tellier says the budget leaves looming questions about how Western Canada is supposed to transition away from oil and gas. However, Elgie said clean technologies like hydrogen and carbon capture are priorities for Alberta.

Building off of what was promised in the fall economic statement and in hopes of reducing people's energy bills, Ottawa is also promising to send around $4 billion over five years to the Canada Mortgage and Housing Corp. to offer interest-free loans of up to $40,000 for households to do green retrofits.

Other climate initiatives include a 50 per cent 10-year reduction on corporate and small business income tax rates for companies manufacturing zero-emissions technologies, such as solar panels and electric buses.

It will also establish the first federal green bond with an issuance target of $5 billion. The goal is to attract investors to finance ways to fight climate change, like through green infrastructure.

Getting more electric vehicles on the road is a priority for the Liberals under its net-zero emissions plan and the budget promises $56 million over five years to work with countries like the United States on bringing in standards for zero-emission vehicle charging and refuelling stations.

There’s also millions to fund research and decide on policy around how Canada’s mineral reserves can be used to support electric vehicle batteries and other net-zero technologies.

Although the government says reducing emissions will help all Canadians, a gender-based analysis in the budget says men will likely benefit from growth in the clean energy sector because they make up most of its workforce, same with the new climate spending on science and research.

It also says employees in manufacturing tend to be men, and those who are middle-aged high-income earners have been the early adopters of zero-emission vehicles, according to data.

Starting in 2022, the spending plan says Ottawa will start sending rebates to residents in Saskatchewan, Ontario, Alberta and Manitoba â€” all subject to paying the federal carbon price â€” on a quarterly basis, instead of annually on personal income tax returns.

Monday’s budget also promises $2.3 billion in funding to federal departments like Parks Canada and Fisheries and Oceans to conserve up to one million square kilometres more land and inland waters to meet the country's 2025 conservation targets.

Elgie called the Liberals’ overall spending on nature conservation important not only because it protects wildlife and biodiversity, but helps the climate as well.