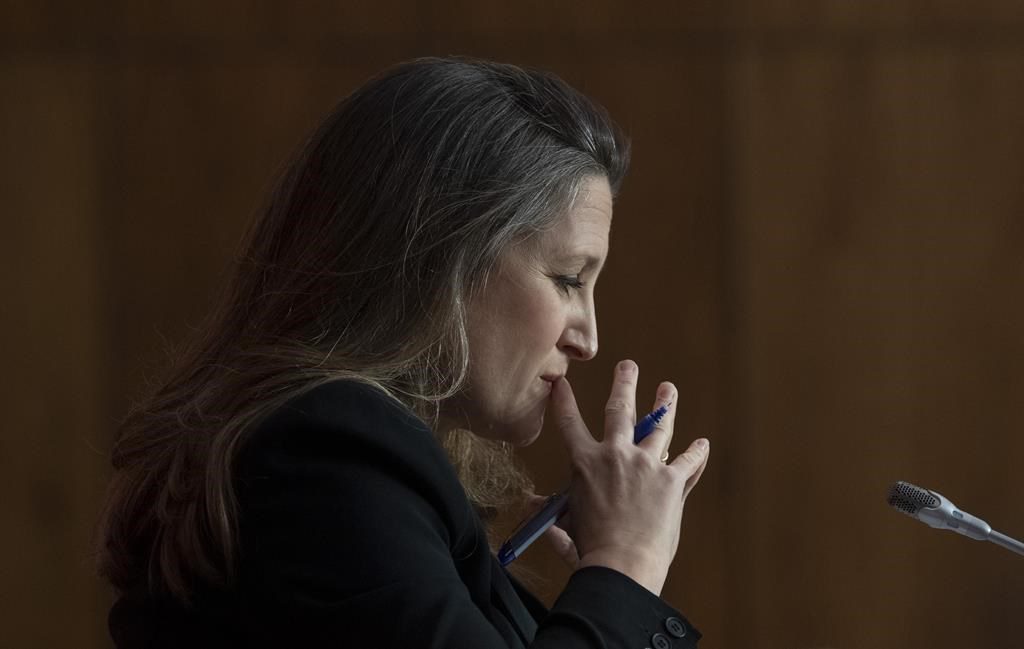 OTTAWA â€” The first federal budget in more than two years extends Ottawa's COVID-19 “lifeline” for those still struggling after a difficult year â€” including aid for laid-off workers â€” another few months as it aims to pull Canada through the pandemic once and for all.

Finance Minister Chrystia Freeland's first crack at a budget plan is also widely viewed as a pre-election platform. There is more than $100 billion in new spending over the next three years targeting a wide variety of voters. There are promises for seniors and their caregivers, working parents, students and business owners.

“This budget is about finishing the fight against COVID,” Freeland said Monday in her speech in the House of Commons.

“It’s about healing the economic wounds left by the COVID recession. And it’s about creating more jobs and prosperity for Canadians in the days and decades to come.”

Freeland is also looking ahead to the post-pandemic Canada the Liberals want to see, one that has $10-a-day childcare, the ability to produce its own vaccines, national standards for long-term care homes and small- and medium-sized businesses equipped with the workers and technology they need to survive.

Canada's net debt is now over $1 trillion for the first time ever, after a $354 billion deficit for the pandemic year just over. It is expected to keep climbing with deficits of nearly $155 billion this year, and $60 billion in 2022-23.

That is driven in part by $101.4 billion in new spending over the next three years, including costs to maintain federal wage and rent subsidies and employment benefits until September, rather than cutting them off in June. The raging third wave of the COVID-19 pandemic has prompted many parts of the country to revive or renew restrictions.

GeneviÃ¨ve Tellier, a political scientist at the University of Ottawa, said the budget is a bit more clearly an election plan than she expected.

The budget’s marquee entry is what Freeland calls a “generational investment” in child care, a $30-billion spend over five years that will first try to cut fees for regulated child care spaces in half by the end of 2022, aiming for them to be $10 a day within five years. The program will have a long-term annual cost of almost $9 billion.

It also seeks to address some of Canada’s biggest nightmares of the pandemic, namely vaccine production and long-term care. Freeland is proposing to invest another $2.2 billion in life sciences and vaccine manufacturing over the next seven years, and $3 billion over five years to help the provinces implement national standards in long-term care.

The Liberal government is waiving interest payments on federal student loans for another year, expanding sick leave benefits under employment insurance, and boosting the tax credit for low-income workers.

Tellier said that last tax credit is the closest the Liberals have come to a guaranteed livable income.

The Liberals are also offering some aid for small- and medium-sized businesses to invest in new technology and hire young people trained in how to implement it.

There is also the promise of a greener, cleaner Canada, with a promise of more than $17 billion in climate change programs, much of it in the form of incentives to encourage heavy industry to curb their emissions and grow Canada’s clean technology sector.

All of it comes with a pandemic-sized asterisk that things could still change drastically if vaccine supplies are delayed or they prove not to work that well against emerging variants of the virus. The budget includes alternative scenarios that show where the fiscal picture might go if the worst-case scenarios of the pandemic play out.

Those risks seem even more real as the country is battling the worst wave of the pandemic yet with record hospitalizations and patients in critical care, and doctors and nurses warning repeatedly of a health-care system on the brink of collapse.

Freeland acknowledged the weight the pandemic continues to bear on Canadians.

“We are all tired, and frustrated, and even afraid," she said. “But we will get through this.”

Whether Canada gets through it without a federal election is the next question to be asked. Opposition parties all rejected the idea of going to the polls for now but NDP Leader Jagmeet Singh seems to be the one under the greatest pressure.

Singh said earlier this year he would support the government because a pandemic election is in nobody’s best interest, and maintained that stance Monday.

“We are not going to make an irresponsible decision,” he said.

Singh’s biggest criticism of the budget was the lack of any new taxes to go after the “ultra rich,” corporations and elite business owners who have made millions of dollars while millions of Canadians suffered.

The closest the budget got to Singh’s request is a tax on luxury purchases.

Conservative Leader Erin O’Toole and Bloc QuÃ©bÃ©cois Leader Yves-FranÃ§ois Blanchet both presented amendments they intend to demand to garner their support. For O’Toole it was an overhaul of the planned child-care program, and Blanchet wants more money for provincial health transfers and additional aid for seniors.

Both also said Singh had taken any pressure off them to vote for the budget to avoid an election.

Note to readers: This is a corrected story. An earlier version incorrectly reported that the budget contained $100 million in spending over next three years.