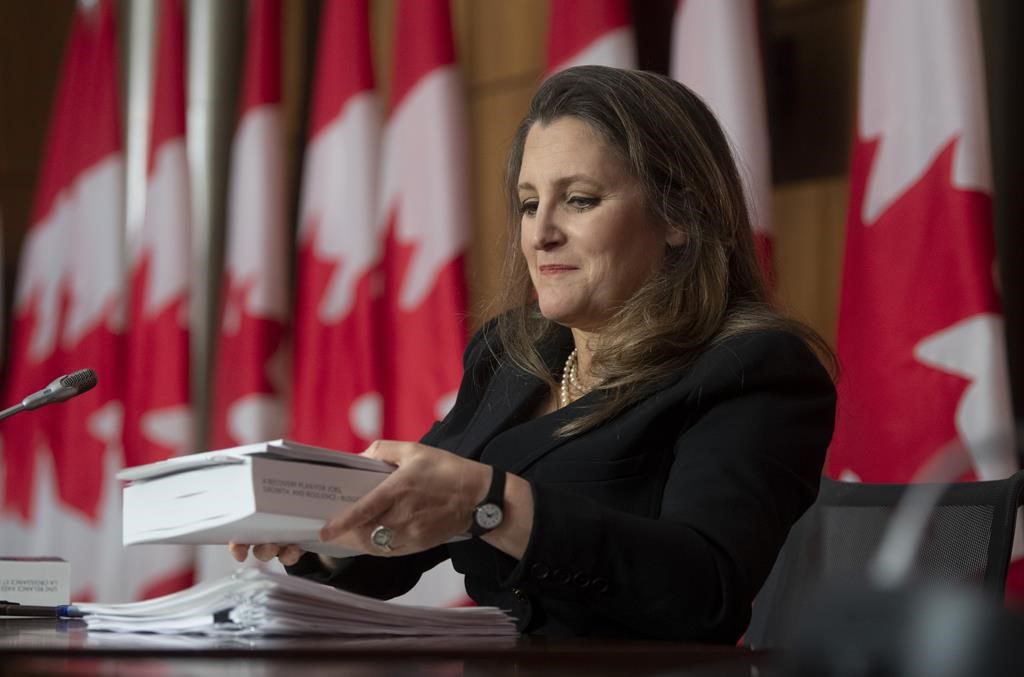 OTTAWA â€” The federal government is looking to give workers and students a leg up with a budget that commits billions to training, benefits and debt relief, as those hit hardest by the COVID-19 pandemic try to dust themselves off.

The first Liberal budget in more than two years aims to create nearly 500,000 training and work placements â€” 215,000 of them for students â€” in a bid to perk up the country’s economic comeback.

To that end, it pledges $2.4 billion over three years to developing skills and trades, with about 40 per cent earmarked for training in sectors ranging from health care to construction.

It adds on $8.9 billion more to beef up the Canada Workers Benefit in a boost to low-wage workers, who will have a higher income threshold at which their benefit starts to shrink.

"Low-wage workers in Canada work harder than anyone else in this country, for less pay. In the past year they’ve faced both significant infection risks and layoffs. And many live below the poverty line, even though they work full-time,” Finance Minister Chrystia Freeland said Monday.

The benefit boost â€” given in the form of a tax refund â€” will extend income top-ups to about a million more Canadians and lift nearly 100,000 people out of poverty, she said.

The income threshold will rise this year to nearly $23,000 for single individuals without dependents and more than $26,000 for families. The change will allow a single, full-time minimum-wage earner to receive about $1,000 more in benefits.

GeneviÃ¨ve Tellier, a political science professor from the University of Ottawa, said the added work incentive and the budget’s emphasis on training represent a “market-oriented vision” of government assistance.

“They are saying you can work and not be penalized, up to a certain point,” she said, referring to the workers benefit.

Notably absent from the 739-page document is any mention of a guaranteed basic income, which Liberals voted to include in their policy book at their convention earlier this month in spite of Prime Minister Justin Trudeau's stated hesitation on the issue.

“I think it's the end of the conversation for a CERB (Canada Emergency Response Benefit) that would be permanent, the $2,000 per month for every Canadian,” Tellier said.

“I don't see any signs in this budget that they want to think about it.”

The budget also allots $5.7 billion over five years to helping post-secondary students, though the vast majority is earmarked for this year and next.

Some $3.1 billion of the total will go to doubling federal student grants in that two-year timeframe, on top of $393 million set aside to waive interest on federal student loans for an extra year until March 2023.

The government also plans to raise the threshold for repayment assistance to $40,000 for borrowers living alone, meaning anyone living under their own roof and earning that amount or less would not need to make interest payments.

The pandemic has been particularly rough on students, with about 50 per cent unemployed in July and August, according to Statistics Canada.

The budget measures mark an attempt to help hard-hit workers and students, but also to keep them from crossing over to the more spend-happy NDP in a possible federal election this year. New Democrats have proposed multiple policies to appeal to those groups, including a $20 minimum wage, billions in cancelled student debt, universal pharmacare and a wealth tax.

Other Liberal measures include bumping the federal minimum wage to $15, pledging $300 million to programs for Black and women entrepreneurs and other underrepresented groups, and recommitting to protect gig workers through promised amendments to the Canada Labour Code.

About 300,000 Canadians who had a job before the pandemic remain out of work, Freeland said.

“More Canadians may lose their jobs in this month’s lockdowns,” she said. “That is a lot of human tragedies.”