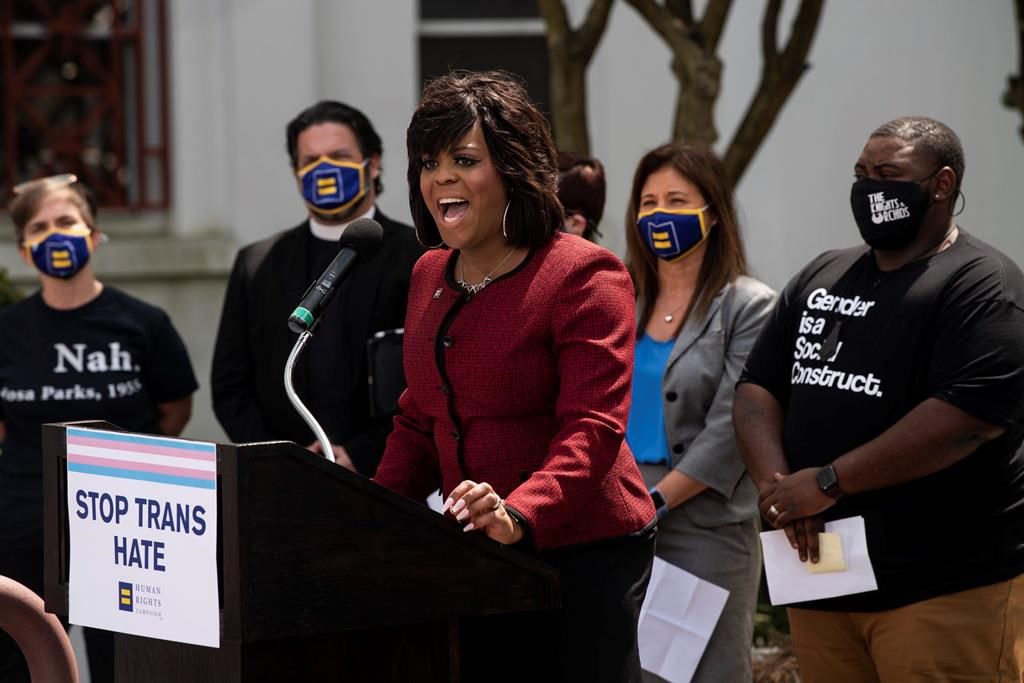 MONTGOMERY, Ala. â€” Transgender youth, parents and advocates on Tuesday urged the Alabama House of Representatives, as well as the state's governor, to reject legislation that would ban the use of puberty-blockers or hormones to treat transgender minors.

Arkansas earlier this month became the first state to approve such legislation. Alabama could be the second if House members approve the Senate-passed bill. Parents, medical providers and a transgender teenager spoke out against the Alabama bill during a virtual press conference hosted by the Human Rights Campaign.

"I ask you to take a look at our family. How am I hurting me or anyone else by wanting medical hormonal treatment? I do not want to be a pawn in a political agenda in which I was never consulted about," Phineas Smith, a 16-year-old transgender boy, said.

The Alabama bill would make it a felony, punishable by up to 10 years in prison, for a doctor to prescribe puberty-blockers or hormones or perform surgery to aid in the gender transition of people 18-years-old or younger. The measure cleared the state Senate in early March and awaits a vote in the House of Representatives, where Republicans outnumber Democrats 76-27.

Opponents, including parents and trans youth, say such measures interfere with medical decisions and target trans individuals for the sake of politics. Sponsors counter that they are trying to protect children from decisions that should wait until adulthood.

House Speaker Mac McCutcheon last week said House members are trying to educate themselves on the issue and he could not estimate when the bill might see a floor vote. The session is tentatively scheduled to end May 17.

"Anytime you get a bill that's that significant, that deals with those kinds of issues, members want to make sure that they are educated on it before they make a vote on it. And I respect that. And because of that, we're not trying to rush that bill through either," McCutcheon said.

Carmarion D. Anderson, Alabama director for the Human Rights Campaign, said the bill is part of a wave of anti-trans legislation being introduced nationally. She said that depression and suicide rates increase among trans youth denied access to gender-affirming medical care.

"Denying them the chance to be who they are isn't just wrong, it's actually putting these kids in danger. The disinformation peddled by the proponents of this bill is dangerous," said Carmarion D. Anderson, Alabama director for the Human Rights Campaign.

Lawmakers in Alabama and 16 other states have introduced measures targeting health care for transgender youth amid a campaign encouraged by the Alliance Defending Freedom, the Heritage Foundation and other groups aligned with the Republican Party.

Trace Trice, Phineas Smith's mother, said legislators “have taken something that is a private matter and used it for their own agendas and made it very clear that they have a true lack of understanding about trans youth and their families."

In a message to the legislators sponsoring the bills, Smith said his parents "taught him that real men admit their mistakes" and there would be no shame in pulling the bill.

"There's shame in not stopping a mistake you know is hurting people. Trans youths from all over Alabama told you this is hurting us," he said.

The Legislature also recently gave final approval to a bill that would ban transgender public school students from playing sports of the gender with which they identify. Alabama Gov. Kay Ivey told reporters Tuesday she will take a "good look" at the bill when it reaches her desk but did not elaborate on whether she will sign it.