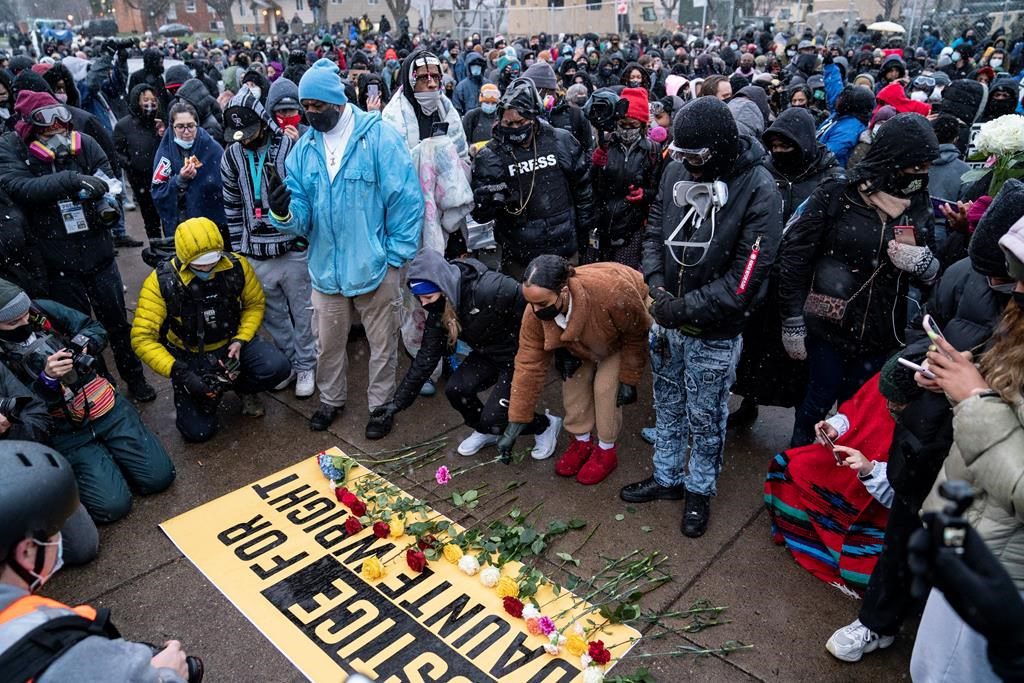 BOSTON â€” A white former police officer is being charged with second-degree manslaughter in the killing of 20-year-old Daunte Wright, just three days after the Black man was shot during a traffic stop in a Minneapolis suburb.

The swift probe and announcement of a charge against Kim Potter, a 26-year veteran and training officer, was handled by a prosecutor from outside Brooklyn Center, Minnesota, where Potter shot Wright.

The decision to hand over the case was made almost immediately by Hennepin County Attorney Mike Freeman, who said county attorneys in the Minneapolis area last year adopted the practice of referring police shootings to other jurisdictions in order to "avoid any appearance of a conflict of interest.”

The Hennepin County attorney’s office has also taken the back seat in the case against Derek Chauvin, the former Minneapolis officer on trial in the death of George Floyd. At the request of Democratic Gov. Tim Walz, Keith Ellison, the state's first Black attorney general, took over the Chauvin prosecution.

Bringing in outside prosecutors to review police shootings is a practice that has gained steam across the U.S. in recent years in an effort to eliminate the appearance of bias.

Here’s a look at the practice and the reason behind it:

WHY USE AN OUTSIDE PROSECUTOR?

Local prosecutors and police officers work alongside each other every day to build cases, and prosecutors rely on officers’ testimony and evidence they’ve gathered to try to convict defendants at trial. That cozy relationship has long led to complaints that prosecutors can’t possibly be objective when deciding whether to bring charges against officers in departments with whom they work closely.

WHERE DO OUTSIDE INVESTIGATIONS HAPPEN?

In Connecticut, killings by police are investigated by state's attorneys from other judicial districts. A new wide-ranging police accountability law there created the position of an inspector general to investigate police officers' use of deadly force. but a committee failed to agree on a candidate to serve in the role.

In Boston and surrounding communities, the top prosecutor in 2019 created a special panel called the "Discharge Integrity Team" to review all police shootings. Suffolk County District Attorney Rachael Rollins’ office keeps jurisdiction over the case, but the outside team meets with her to review the direction of the probe and examine investigators’ work.

Rollins, the first woman of colour to serve as district attorney in Massachusetts, has said that even before recent killings of Black people by police, "poor, Black and brown communities were rightfully skeptical of a DA's office investigating the very police officers they partner with every day."

Since January, at least eight states have introduced legislation that would change how fatal police shootings are investigated. Those changes overwhelmingly require state attorneys general to become the lead investigator or create a division within their office that would take over any investigation and prosecution.

The most sweeping proposal was introduced by lawmakers in the GOP-controlled legislature in Texas, where there is currently no law dictating the process of such investigations. The bill introduced in January would create a constitutional amendment that would require the state attorney general to appoint a special prosecutor in fatal use-of-force cases.

In Minnesota, a legislative proposal would require such cases to be investigated by a special prosecutor. The bill would also prohibit the use of grand juries in certain use-of-force cases.

DO OUTSIDE PROSECUTORS GET DIFFERENT RESULTS?

It’s hard to say. In New York, for example, few of the probes overseen by New York's attorney general have led to charges against officers. In February, they declined to bring charges in the death of Daniel Prude, who died in custody after officers put a spit hood over him.

It was the third time there were no charges in a case handled by the Special Investigations and Prosecutions Unit, created in 2015 amid an outcry over police skirting punishment in the deaths of unarmed Black people. The unit has yet to win a conviction.

Farnoush Amiri also contributed from Anaheim, California. Amiri is a corps member for the Associated Press/Report for America Statehouse News Initiative. Report for America is a non-profit national service program that places journalists in local newsrooms to report on undercovered issues.