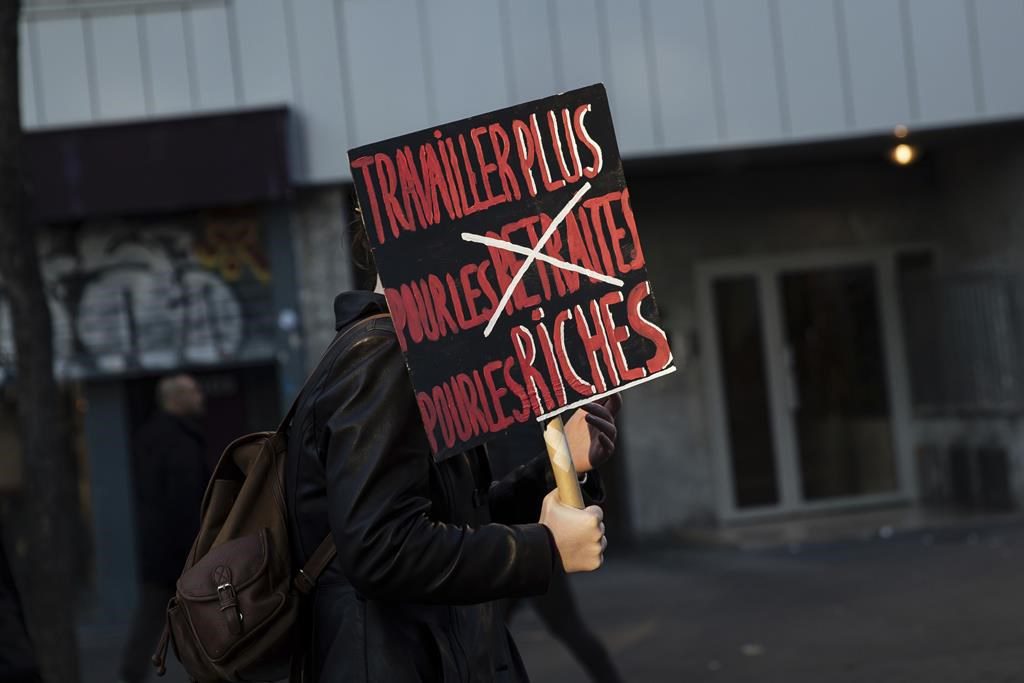 PARIS (AP) — The French government is presenting a bill on Monday that foresees broad changes to the pension system that will notably push back the legal retirement age from 62 to 64.

Unions aren’t happy, and more than 1 million people took to the streets last week to reject the measure. More strikes and protest action are planned Jan. 31, and probably beyond.

What does President Emmanuel Macron’s government want to change and why, and what does it mean for workers, and why are so many people opposed?

All French retirees receive a state pension. The system’s funding is based on the redistribution of a specific tax from those who are working to those who are retired.

The system is projected to dive into deficit in the coming decade amid France’s aging population.

The average French pension this year stands at 1,400 euros per month ($1,500 per month) once taxes are deducted.

The system is complex, with differences depending on professions, and the private and public sectors. Some are allowed to take early retirement, including the military, police officers and people with physically demanding jobs.

The government says the changes will make the system financially sustainable.

Workers who were born in 1961 and were supposed to retire this year will need to work three additional months. Those born in 1968 and after will need to be at least 64 and have worked for 43 years to be entitled to a full pension.

Those who don’t fulfill the conditions, like many women who interrupted their careers to raise children or those who undertook a long period of study and started working late, will have to wait until the age of 67 to get a full pension — unchanged from the current system.

Those who started working from the age of 14 to 19 will be allowed to get early retirement, as will people with major health issues.

The government argues that the changes will also allow for the increase of the minimum pension by 100 euros, to reach about 1,200 euros for a full career.

OPPOSITION TO THE PLANNED CHANGES

Opinion polls show a majority of French are opposed to the measure. Thursday’s protests, the first public show of resistance toward the measures, gathered larger crowds than in past years.

France’s eight main workers’ unions are calling on the government to abandon the age measure altogether. It is the first time since 2010 that all the unions joined forces against a planned reform.

Opponents argue that there are other ways to get financing for the pensions — for instance via a tax on the wealthy or an increase in payroll contributions paid by employers.

Most opposition parties, including the hard-left France Unbowed, the Greens and the Socialist party, as well as the far-right National Rally, vowed to wage a harsh battle against the bill at parliament.

The changes are included in a budget amendment bill to be formally presented at a Cabinet meeting on Monday. They will start being debated at parliament on Feb. 6.

Macron’s centrist alliance lost its parliamentary majority last year, yet still has the most important group at the National Assembly, where it has hopes of being able to join up with the conservative The Republicans party to pass the measure.

Otherwise, the government may use a special power to force the law through parliament without a vote — but such a move will come at the price of heavy criticism.

The bill will then need to be voted on by the Senate, where The Republicans have the majority.

The government aims at passing the bill by summer so that changes can take effect in September. Yet its plans may be disrupted depending on the scale and duration of protests and strikes.