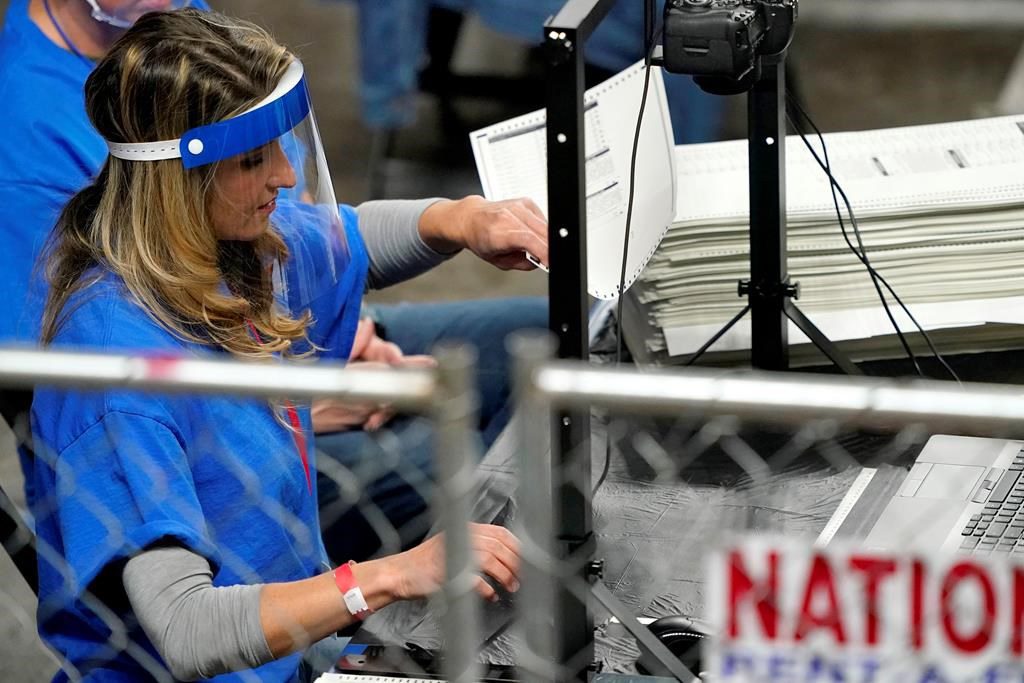 In just over a month, the crowdfunding page dedicated to bringing an Arizona-style review of the 2020 presidential election to Pennsylvania had collected $15,339 from 332 donors. Today, the effort has morphed into a full-fledged campaign to “Audit the Vote PA.” The website offers a six-week course on the Constitution and encourages supporters to become a “walking billboard for a forensic audit” by purchasing various hats and T-shirts.

Still prominent is the “donate” button. But unlike the initial crowdfunding page, it’s hard to tell how much money the group is bringing in or how the money is being spent. Multiple requests for information sent to an email listed on the site received no replies.

Efforts to expand Arizona’s controversial, Republican-led review of the 2020 election to other states are growing, fueled by former President Donald Trump’s false claims of victory and funded by a network of groups operating with little oversight. Election officials and experts have raised the alarm about these private fundraising efforts and what they see as a broader push by candidates to raise money off conspiracy theories about the 2020 election.

“It has become profitable both politically and financially for people to lie about the election and denigrate American democracy,” said Matt Masterson, a top election security official during the Trump administration. “The sad part is that they are doing this by lying to voters and folks who have concerns about our democracy, and they are taking their money in pursuit of their lies.”

While some fundraising details have come to light, little is known about how much has been raised and from whom. That’s the case in Arizona, where a review of Maricopa County’s election ordered by Republicans who control the state Senate has drawn widespread criticism, including from fellow Republicans. On Wednesday, the firm behind the review — Cyber Ninjas — said it had received $5.6 million from five groups connected to prominent supporters of Trump’s efforts to cast doubt on the 2020 election results.

That’s in addition to the $150,000 in state taxpayer money set aside by Republicans in the Legislature.

A group aligned with the pro-Trump One America News Network contributed $605,000, and a group set up by Patrick Byrne, the former CEO of Overstock.com, gave $3.2 million, according to Cyber Ninjas. Both are set up as nonprofit organizations with limited financial reporting requirements and do not have to disclose all their donors.

Byrne said he does not plan to disclose donor information, saying they were mostly small-dollar contributors. He did say he has personally donated about $2 million to the effort.

Arizona’s ballots have been counted, audited and certified. Trump lost the state. Still, his allies in the GOP-led state Senate secured access to voting equipment, software, ballots and other voting materials to conduct what they describe as a “forensic audit” of Maricopa County. Election experts say their methods are flawed and have compromised the security of the county’s voting machines.

“There’s no credibility to this process, and the funding aspect is just one measure of that,” said Arizona Secretary of State Katie Hobbs, a Democrat who has objected to the review.

In Pennsylvania, it’s not clear where the money will come from to pay for a similar “forensic investigation” envisioned by its backers, led by Republican state Sen. Doug Mastriano. He has left key questions unanswered, such as who will do the work, how it will be funded and where such a vast amount of documents and equipment would be stored.

Mastriano, in a radio interview in mid-July, said he had recommended three options to Senate Republican leadership, but gave little detail other than saying the review would be funded through a blend of taxpayer and private money. He has not responded to AP requests seeking more information.

Earlier this month, Mastriano sent letters to three counties — including Philadelphia — requesting access to various documents and equipment, with the threat of subpoenas for holdouts. Officials with all three counties have so far shown no interest in participating.

The fundraising appeals are not just limited to the GOP reviews. In Pennsylvania and Arizona, GOP officials and candidates have been asking for donations while promoting the reviews. Trump’s political action committee recently sent an email to supporters under the headline “new evidence” with unsubstantiated claims of problems with the 2020 election in Georgia, which Trump lost.

Meanwhile, Trump’s political action committee has not helped finance the Arizona ballot review or to advocate for similar reviews in other states, leaving those efforts to other groups.

In Michigan, a Republican-led state legislative panel conducted its own review of the 2020 election and issued a report that said it found no evidence of significant fraud.

The lawmakers also encouraged the state attorney general to consider investigating those who have been pushing misleading and false information to “raise money or publicity for their own ends.” Attorney General Dana Nessel, a Democrat, has done just that.

Although the report did not specify who should be investigated, it referenced lawyer Matthew DePerno, who unsuccessfully sued a northern Michigan county over its 2020 election results, and former state Sen. Patrick Colbeck.

Dominion Voting Systems, one of the nation’s largest manufacturers of voting equipment, has threatened legal action, accusing Colbeck of “knowingly sowing discord in our democracy” and soliciting “exorbitant amounts of money” — over $1 million — to his business. DePerno’s website also seeks donations and says $389,000 has been collected. A group connected to DePerno contributed $280,000 to the Arizona review, according to Cyber Ninjas.

Colbeck has called the legislative report “shoddy” and has called for the panel’s GOP senators to be censured. DePerno has accused the committee of an election “cover-up.” Neither returned messages left by AP seeking comment.

It’s unclear who the attorney general’s office might be investigating, and an office spokesperson declined to answer questions. In Pennsylvania, a spokesperson for Attorney General Josh Shapiro, also a Democrat, would not say whether the office was investigating, but encouraged “anyone who may have been a victim of any scheme — including fraudulent attempts to profit off of election conspiracies and the big lie — to file a complaint.”

Lynsey Barron, a former federal prosecutor now in private practice in Atlanta, said any investigation into potentially fraudulent activity will face challenges, given that the First Amendment provides wide latitude for fundraising.

Election experts said the public instead should focus on researching and understanding the bipartisan, post-election audits that were conducted by election officials after the November election using verified, fact-based methods.

“You are not giving them a real audit at the end of the day,” Susannah Goodman, an election security expert with Common Cause, said of the GOP reviews in Arizona and elsewhere. “It’s like going to a snake oil medicine doctor and paying him a lot of money and he gives you a bottle of green goop saying this will cure your cancer.”

Christina A. Cassidy And Marc Levy, The Associated Press