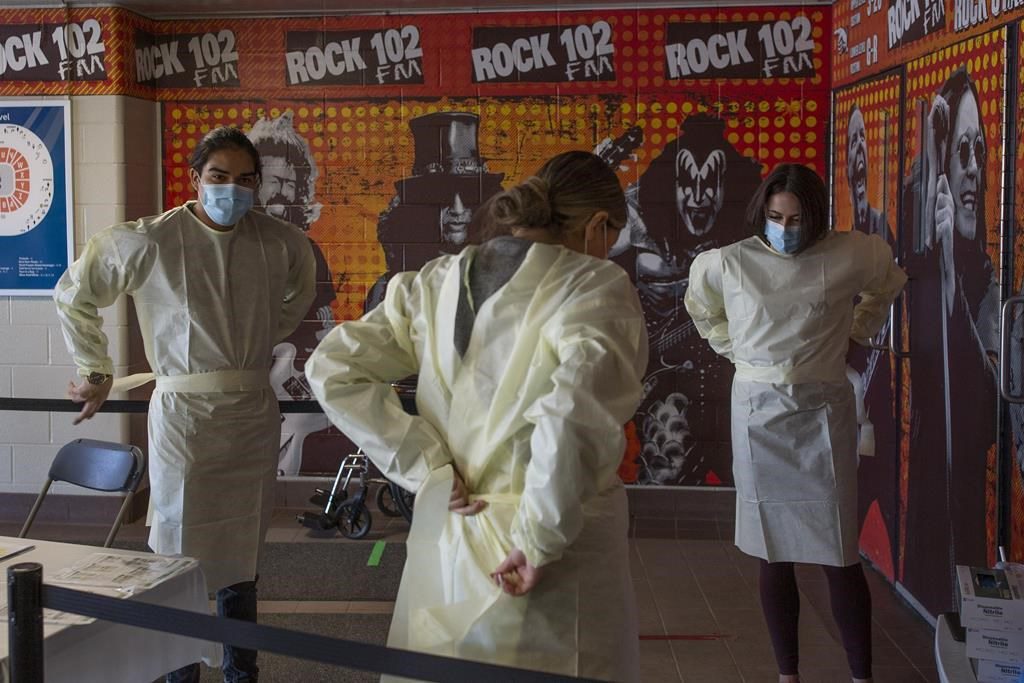 SASKATOON â€” Nazeem Muhajarine says he feels a sense of relief after receiving his first dose of a COVID-19 vaccine last week at a centre in Saskatoon.

“It was just so well-organized and run. I felt completely safe,” Muhajarine said in an interview.

The professor of community health and epidemiology at the University of Saskatchewan said the province is making great strides quickly getting shots into arms, but he’s concerned some people are being left behind.

Premier Scott Moe touted during question period Wednesday that Saskatchewan is leading the country when it comes to administering first vaccinations.

More than 365,000 doses of vaccine have been given in Saskatchewan. Health officials say 52 per cent of residents over the age of 40 have received their first shot.

It puts Saskatchewan â€” with a population of just under 1.18 million â€” ahead of other provinces when it comes to doses delivered per capita. Data from a COVID-19 vaccination tracker, run by University of Saskatchewan students using federal and provincial data, suggests the province in outpacing Ontario and Quebec.

Moe credits his Saskatchewan Party's “robust vaccination plan,” which he says will be augmented in the coming days. Eligibility for all vaccines is being lowered to 44 on Thursday, except for in the north where it will go down to 40. It's expected to drop to 40 for the general population by Wednesday.

Muhajarine said there’s much to applaud about the vaccine rollout. The choice, initially, to use age-based eligibility meant it was easy to understand and targeted those who were more likely to experience severe outcomes if infected, he said.

Drive-thru COVID-19 vaccination clinics have also been successful, said Muhajarine. One providing mass immunizations in Regina as the capital has became a hot spot for variants has expecially worked well.

Muhajarine said his own experience shows that organization at larger mass vaccination sites is also commendable.

However, the professor said now that vulnerable senior populations are immunized and there are highly contagious new strains, the province may be missing the mark.

Getting the most vaccinations out fastest is just part of a good public health response, he said, but surging infections and hospitalizations mean the response should now be targeted to those most affected.

“Workplace spreads and outbreaks have been quite prevalent,” Muhajarine said. “That’s been a huge contributor in Regina and has been a contributor in Saskatoon as well.”

There were 231 new cases in Saskatchewan on Wednesday and four more deaths, including a person in their 30s another in their 40s. The others were over 70. There were 185 people in hospital and 49 in intensive care.

Muhajarine said the recent deaths of influential Cree teacher Victor Thunderchild, 55, in Prince Albert and well-known chef Warren Montgomery, 42, in Regina are examples of people in high-risk work environments who weren't able to get vaccinations under the age-eligibility plan.

He said Saskatchewan should consider following Ontario and Manitoba, which are pivoting vaccination plans to target neighbourhoods where people have a higher risk of contracting the virus.

It should also consider socio-economic factors, including how many residents are in a household and the type of jobs people have, he added.

One example would be neighbourhoods with multi-generational households and where many people work service jobs facing the public. Congregate living facilities such as shelters and correctional centres would be another, he said.

Muhajarine said teachers and other essential workers should also get priority.

Every region in the country is seeing benefits to targeting areas and occupations where the pandemic’s third wave has taken hold, he suggested

“That is not something to be trivialized in this kind of complex and mass undertaking.”