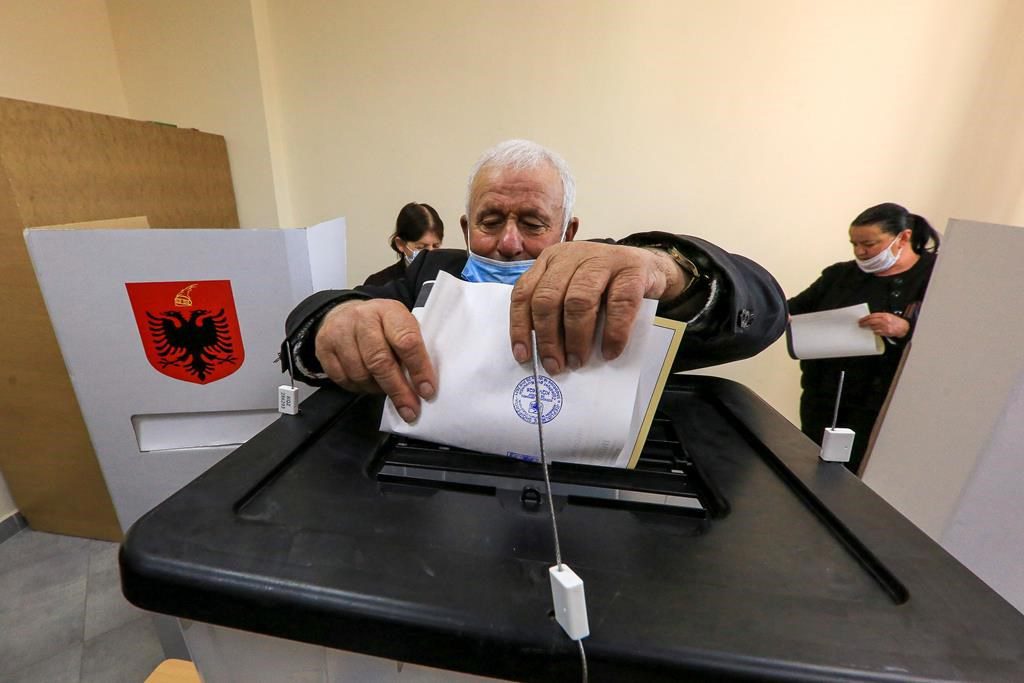 TIRANA, Albania â€” Initial exit poll data in Albania’s parliamentary election on Sunday suggests that the ruling Socialist Party is in a tight race with the opposition Democratic Party.

The exit poll run for Euronews Albania from the MRB, part of the London-based Kantar Group, projects that the left-wing Socialists will win about 44% of the vote while the Democratic Party is expected to capture about 42%.

Some 3.6 million eligible voters in Albania and abroad voted to elect 140 lawmakers for a four-year mandate in the Balkan nation.

"The process was characterized by a calm situation, security and integrity," said Ilirjan Celibashi, head of the Central Election Commission. He said the winner would be known "in 48 hours."

THIS IS A BREAKING NEWS UPDATE. AP's earlier story follows below.

Albanians voted Sunday in a parliamentary election amid the pandemic, opposition allegations of official corruption and a bitter rivalry between the country’s two largest political parties.

Some 3.6 million eligible voters, including Albanians overseas, were electing 140 lawmakers among 1,841 candidates from 17 political parties or coalitions, along with some running independently. No early or postal voting was allowed and people infected with COVID-19 cannot vote.

Following the approval of electoral reforms last year, a new voters' electronic identification, a partial depoliticizing of the electoral commission and a pilot project on full digitalization of the voting and counting process are being applied. The hope is that post-communist Albania's 10th parliamentary election will be free and fair. To date, voting always has been marred by irregularities.

Albania, a NATO member since 2009, is looking forward to launching full membership negotiations with the European Union later this year and Sunday’s vote is considered a key milestone on that path.

Yet Lulzim Basha of the opposition Democratic Party accuses the government of corruption and links to organized crime, and pledges lower taxes, higher salaries and more social support.

Confrontations between supporters of the two main parties culminated Wednesday in central Elbasan city, where a leading activist of the Socialist Party died. Police said the victim was shot, allegedly by a member of the opposition Democratic Party, during an argument.

Though officially impartial, President Ilir Meta has turned into a strong government opponent, accusing Rama of concentrating all legislative, administrative and judicial powers in his hands and running a "kleptocratic regime" that has bungled pandemic response and delayed the country's EU integration.

There were some glitches Sunday. The electronic identification machines did not operate in 142 out of 5,199 polling stations after no operators to work them were found in those remote areas, according to Ilirjan Celibashi, head of the Central Election Commission.

An Albanian man was arrested after photographing the ballot, something not allowed by law.

Political leaders called on people to vote as they cast their own ballots. Kosovar Prime Minister Albin Kurti, also an Albanian citizen, voted, too.

"For the Constitution, for the republic, for democracy, for Albania in Europe," said Meta.

Scores of foreign observers from the Organization for Security and Cooperation in Europe and Western embassies were monitoring the vote.

"We hope that every Albanian citizen goes and votes, free of fear, free of interference," said U.S. Ambassador Yuri Kim at a polling station in northern Shkodra. "This is your day."

Albania has seen a significant fall in daily coronavirus cases in the past week despite political rallies being held around the country. More than 400,000 people have received a vaccine jab. An overnight curfew has been enforced with restrictions on gatherings and mandatory mask-wearing.