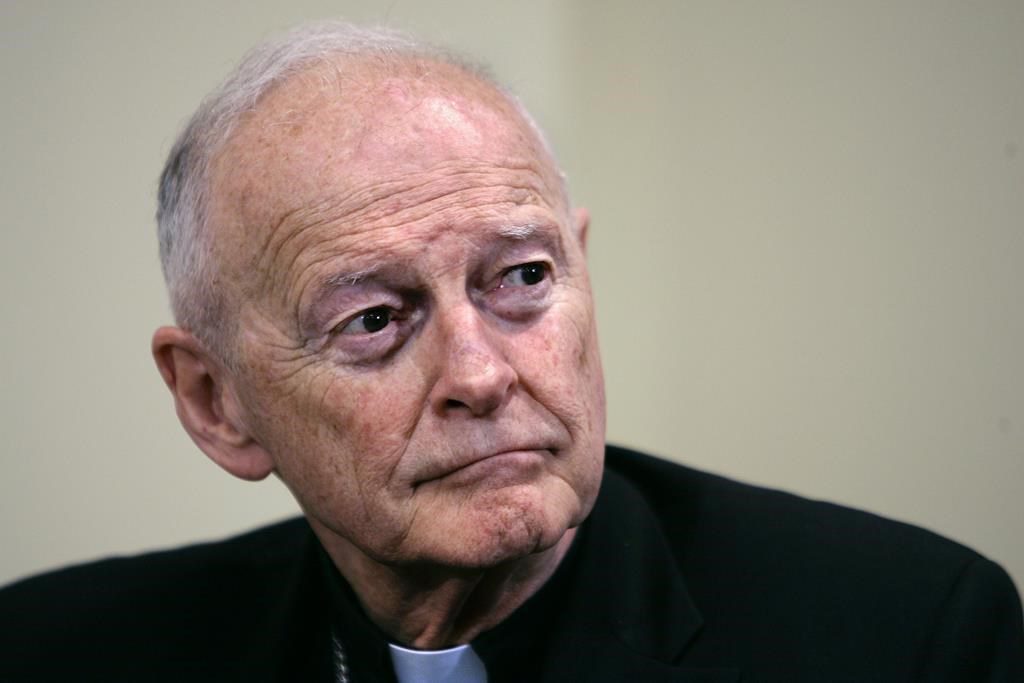 BOSTON (AP) — Former Cardinal Theodore McCarrick, who was defrocked after a Vatican investigation confirmed he had sexually molested adults as well as children, has been charged with sexually assaulting a teenage boy during a wedding reception in Massachusetts in 1974, court records show.

McCarrick is the first cardinal in the U.S. to ever be criminally charged with a sexual crime against a minor, according to Mitchell Garabedian, a well-known lawyer for church sexual abuse victims who is representing the man alleging the abuse by McCarrick.

“It takes an enormous amount of courage for a sexual abuse victim to report having been sexually abused to investigators and proceed through the criminal process,” Garabedian said in an email. “Let the facts be presented, the law applied, and a fair verdict rendered.”

McCarrick faces three counts of indecent assault and battery on a person over 14, according to documents filed in the Dedham District Court on Wednesday.

Barry Coburn, an attorney for McCarrick, told The Associated Press that they “look forward to addressing the case in the courtroom,” and declined further comment.

The charges against McCarrick were first reported by The Boston Globe on Thursday.

The man said the abuse started when he was a young boy, according to the court records. The man told authorities during an interview in January that McCarrick was close to his family and would perform wedding masses, baptisms and funerals for them.

The man said that during his brother’s wedding reception at Wellesley College in June 1974 — when he was 16 — McCarrick told him that his father wanted him to have a talk with McCarrick because the boy was “being mischievous at home and not attending church.”

The man said that the two of them went for a walk around campus and McCarrick groped him before they went back to the party. The man said McCarrick also sexually assaulted him in a “coat room type closet” after they returned to the reception, authorities wrote in the documents.

Before leaving the room, McCarrick told him to “say three Our Fathers and a Hail Mary or it was one Our Father and three Hail Marys, so God can redeem you of your sins,” according to the report.

The man also described other instances of sexual abuse by McCarrick over the years, including when the man was an adult, the report said.

Authorities began investigating McCarrick after Garabedian sent a letter alleging the abuse to the district attorney’s office, according to the court records.

McCarrick can still be charged in this case because he wasn’t a Massachusetts resident and had left the state, stopping the clock on the statute of limitations, authorities said.

McCarrick, 91, was defrocked by Pope Francis in 2019 after a Vatican investigation confirmed decades of rumors that he was a sexual predator.

The case created a credibility crisis for the church since the Vatican had reports from authoritative cardinals dating to 1999 that McCarrick’s behavior was problematic, yet he became an influential cardinal, kingmaker and emissary of the Holy See’s “soft diplomacy.”

It led to a two-year investigation that found that bishops, cardinals and popes downplayed or dismissed multiple reports of sexual misconduct. An internal investigation report released last year put the lion’s share of blame on Pope John Paul II, who appointed McCarrick archbishop of Washington, D.C., despite having commissioned an inquiry that confirmed he slept with seminarians.

“We hope that these charges lead to justice,” she said in an emailed statement.

Jeff Anderson, an attorney who has represented others who say they were victimized by McCarrick, said in a statement that the defrocked cardinal’s “history of prolific sex crimes has been ignored by the highest-ranking Catholic officials for decades.”

“For too long Catholic institutions have been self-policing while making pledges and promises without action. McCarrick should be behind bars for his crimes,” Anderson said.

McCarrick, who now lives in Missouri, has been ordered to appear in Massachusetts for his arraignment on Sept. 3. The hearing was originally scheduled for Aug. 26.

Of the thousands of Catholic clergymen implicated in sexual abuse in recent decades, McCarrick was distinctive in having reached the highest circles of church leadership — even as awareness of his suspect behavior spread steadily through the hierarchy.

Ordained as a priest in New York City in 1958, McCarrick rose to become archbishop of Newark, New Jersey, in 1986 and then archbishop of Washington, D.C., in 2000. He was elevated to the rank of cardinal in 2001 by Pope John Paul II.

In June 2018, McCarrick suddenly became the face of the long-festering Catholic sex abuse crisis as Pope Francis removed him from public ministry due to allegations that he abused a teenager while a priest in New York. A church panel determined that a former altar boy’s allegations that McCarrick fondled him before Christmas Mass at St. Patrick’s Cathedral in 1971 and 1972 were “credible and substantiated.”

The church also acknowledged that it had made previously undisclosed financial settlements with adults who accused McCarrick of sexual misconduct decades ago. It was apparently common knowledge in the U.S. and Vatican leadership that “Uncle Ted,” as McCarrick was known, slept with seminarians, and yet he still he ascended up the church ranks.