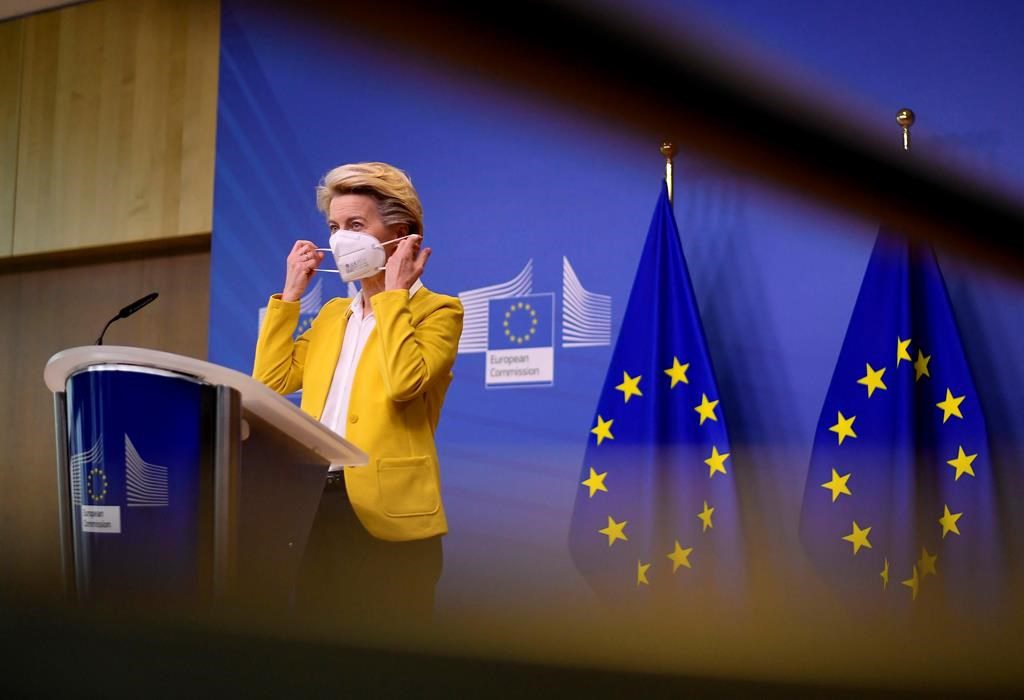 BRUSSELS â€” In a stinging rebuke to pharma giant AstraZeneca Wednesday, the European Union announced plans to negotiate a massive contract extension for Pfizer-BioNTech’s COVID-19 vaccine insisting the 27-nation bloc had to go with companies that had shown their value in the pandemic.

"We need to focus on technologies that have proven their worth," said EU Commission President Ursula von der Leyen. She also announced that America’s Pfizer and Germany’s BioNTech would provide the EU with an extra 50 million doses in the 2nd quarter of this year, making up for faltering deliveries of AstraZeneca.

In contrast to the oft-criticized Anglo-Swedish company, von der Leyen said Pfizer-BioNTech "has proven to be a reliable partner. It has delivered on its commitments, and it is responsive to our needs. This is to the immediate benefit of EU citizens."

Exacerbating the problems for AstraZeneca, Denmark decided Wednesday not to resume use of its vaccine, after putting it on hold last month following reports of rare blood clots in some recipients. The bulk of the shots given in the Scandinavian country so far have been the Pfizer-BioNTech vaccine.

The Johnson & Johnson jab, which uses the same base technology as AstraZeneca, hit a snag this week when U.S. regulators recommended a "pause" in administering Johnson & Johnson shots. Deliveries in the EU have been suspended.

AstraZeneca was supposed to be the workhorse of the EU’s vaccine drive this year â€” a cheap and easy-to-transport shot to break the pandemic’s back. Yet, the EU said that out of 120 million doses promised for the 1st quarter, only 30 million were delivered, and, of the 180 million expected, now there are only 70 million set for delivery in the 2nd quarter.

Because of that shortfall, the EU has come under crushing pressure as, even though it it is a major producer and exporter of vaccines, it cannot get its vaccinations even close to the levels of the United Kingdom and the United States.

Now, Pfizer-BioNTech could well become the key to beat the pandemic on the continent.

With 200 million doses already earmarked for the bloc this quarter from Pfizer-BioNTech. the 50 million additional deliveries will be especially welcomed by EU nations dealing with supply delays and concerns over rare blood clots potentially linked to the Oxford-AstraZeneca vaccine.

Von der Leyen said the EU will start negotiating to buy 1.8 billion doses of the Pfizer-BioNTech vaccine through 2023.

"It will entail that not only the production of the vaccines, but also all essential components, will be based in the EU," von der Leyen said.

The European Commission currently has a portfolio of 2.3 billion doses from half a dozen companies and is negotiating more contracts.

Von der Leyen expressed full confidence in the technology used for the Pfizer-BioNTech vaccine, which is different from that behind the Oxford-AstraZeneca vaccine.

The active ingredient in the Pfizer-BioNTech shot is messenger RNA, or mRNA, which contains the instructions for human cells to construct a harmless piece of the coronavirus called the spike protein. The human immune system recognizes the spike protein as foreign, allowing it to mount a response against the virus upon infection.

Astra Zeneca’s is made with a cold virus that sneaks the spike protein gene into the body. It's a very different form of manufacturing: Living cells in giant bioreactors grow that cold virus, which is extracted and purified.

Von der Leyen said Europe needs to have a technology that can boost immunity, tackle new variants and produce shots quickly and massively. "mRNA vaccines are a clear case in point," she said.

The planned negotiations with Pfizer left in the middle what the EU would do about any new contracts with AstraZeneca. "Other contracts, with other companies, may follow," said von der Leyen.