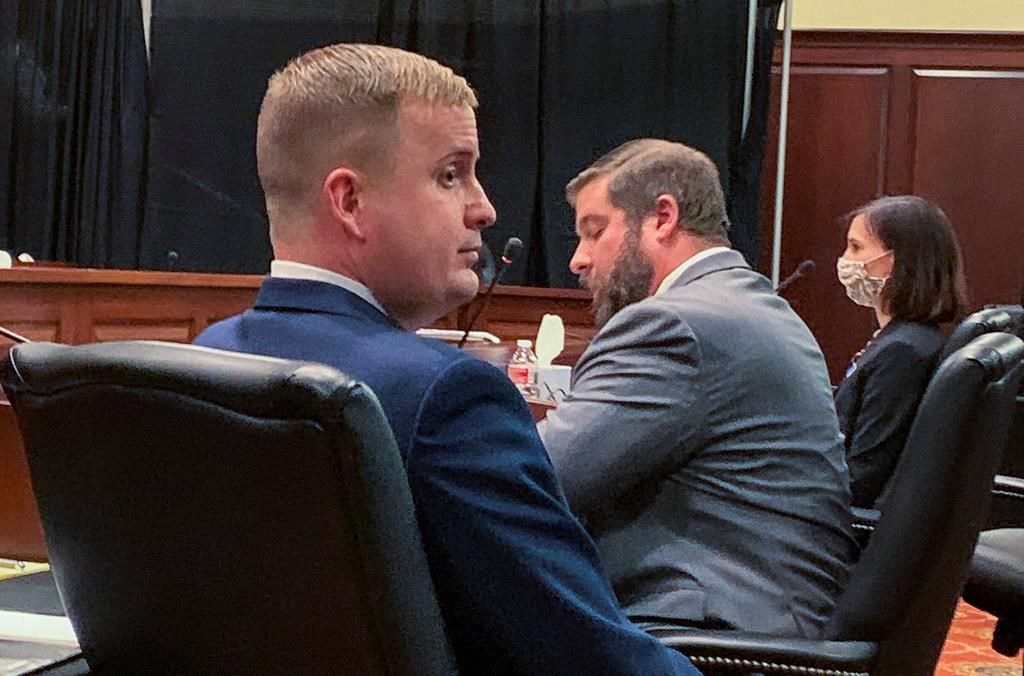 BOISE, Idaho â€” An Idaho lawmaker facing rape allegations from a 19-year-old intern refused to answer some questions during a legislative ethics hearing Wednesday after his attorney told him to invoke his constitutional right against self-incrimination.

A committee will use testimony from Lewiston Republican Rep. Aaron von Ehlinger’s ethics hearing to determine if the 38-year-old lawmaker "engaged in conduct unbecoming a representative which is detrimental to the integrity of the House."

The investigation into von Ehlinger’s conduct began in March after the intern told a supervisor that von Ehlinger raped her at his apartment after the two had dinner at a restaurant. The Boise Police Department has a criminal investigation underway. Von Ehlinger has denied the allegations and maintains the sexual encounter was consensual.

When the lawmaker was asked about what happened at his apartment, his attorney Edward Dindinger told him not to answer.

"I am instructing him not to answer these questions based on his Fifth Amendment rights, and I don't believe any competent counsel could advise him otherwise," Dindinger said.

The young intern, who was also compelled to testify at the public hearing and did so while using the name "Jane Doe," told the committee that she told von Ehlinger "no" in several different ways as he tried to initiate sexual contact at his apartment.

She also confirmed to the committee that her statement to police â€” that the lawmaker pinned her down, forced her to perform oral sex and, after she moved her head away, he masturbated on her while her arm was trapped â€” was correct.

The Associated Press generally does not identify people who say they have been sexually assaulted.

Doe testified from behind a screen intended to protect her identity. As the intern tried to exit the building after giving her testimony, some onlookers in the hall attempted to follow and videotape her as she went to her car, reported Alexandra Duggan with the University of Idaho’s McClure Center Legislative Press on Twitter. Yelling and crying could be heard inside the committee room.

Several far-right blogs, one of von Ehlinger's former attorneys and White Bird Republican Rep. Priscilla Giddings have all publicly released the teen's identity, making disparaging remarks about her and the allegations. Giddings, who was also in the committee room, scoffed and laughed at times during the hearing, including when the intern's attorneys suggested that the bullying the intern had experienced would make other women less willing to report sexual assault.

The ethics committee hearing isn’t a criminal proceeding. Instead, it’s intended to help the members of the ethics committee decide whether von Ehlinger should face penalties â€” up to and including possibly being expelled from the Legislature.

Much of the testimony Wednesday morning focused on whether it was appropriate or expressly forbidden for lawmakers to date staff members. Von Ehlinger's attorney repeatedly stressed that there are no written anti-fraternization rules for the House of Representatives.

Idaho Deputy Attorney General Leslie Hayes, meanwhile, brought witnesses who testified that respectful workplace training sessions make clear that those working in the Statehouse shouldn't even hug each other because it may make some feel uncomfortable.

The intern testified that von Ehlinger repeatedly approached her when she worked at the Statehouse, once inviting her into his office and visiting her office roughly 10 times.

She said she hoped the dinner would be an opportunity to network as well as a chance to eat at a fancy restaurant that she would never normally be able to afford as someone who earns $8 an hour.

The intern told the committee that appearing in the hearing and all the proceedings leading up to the hearing have been difficult.

"How do I explain that â€” vomiting on myself in the bathroom … calling my mom because I’m terrified … how do I explain that to the committee, what you’ve done to me?" she said about being required to testify. "I came here fighting and earning your respect. But I don’t blame you. I forgive you. You’re doing your job, and I am too."

Outside the Statehouse, dozens of supporters of the intern gathered for a rally to demand that von Ehlinger and other lawmakers be held accountable for the allegations and for allowing the intern’s identity to be revealed. Some in the crowd held signs with slogans like, "Expel von rapist" and "Leveraging an elected office for sex is unethical."