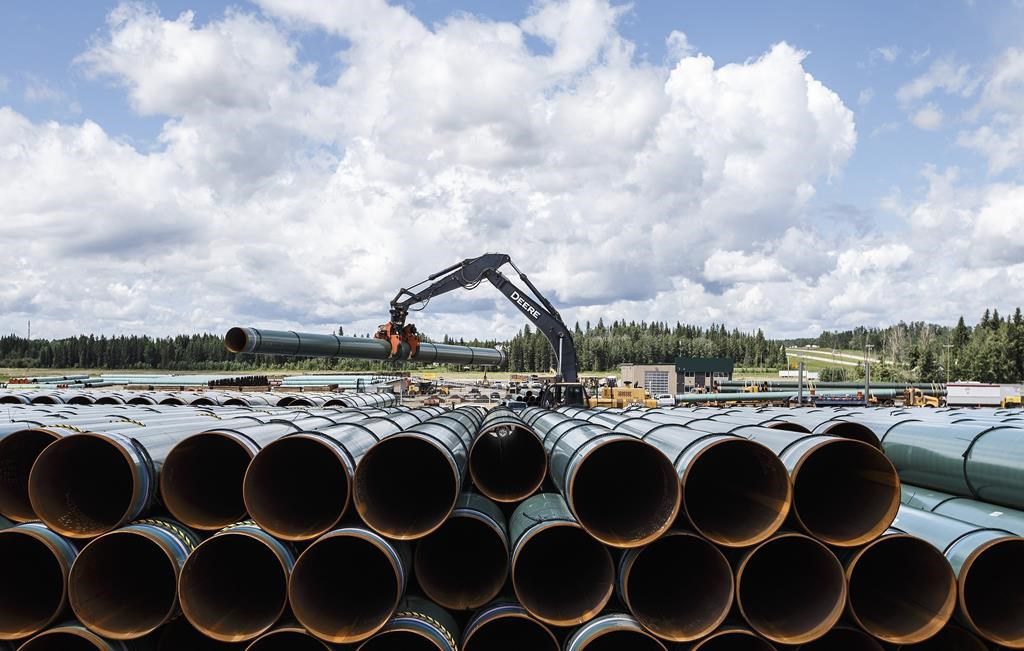 OTTAWA — Federal officials were asking themselves how many pipelines does Canada really need in the days after U.S. President Joe Biden cancelled Keystone XL.

The query was posed in a briefing note from Natural Resources Canada and released to The Canadian Press under federal access-to-information legislation.

The document, addressed to the department’s deputy minister, was prepared in anticipation of meetings with those affected by Biden’s January decision, including an Alberta government official, Keystone XL owner TC Energy and others in the industry.

Construction in Alberta had already begun on the 1,947-kilometre pipeline designed to send 830,000 barrels of crude oil a day from Hardisty, Alta, to Steele City, Neb., when Biden scrapped the project’s permit on his first official day in the White House.

Biden was fulfilling a campaign pledge but those in western Canada’s oil and gas sector, including its elected representatives, felt the move as a blow to an industry already reeling from job losses and economic headwinds beyond the COVID-19 pandemic.

Ahead of the late January meetings to discuss the cancellation with stakeholders, the federal natural resources department briefing note posed some questions: “Do you believe Canada still requires additional export capacity beyond (TransMountain) and Line 3? What do you see as the likely routes to putting it in place?”

“I think the market will decide that and I think investors will decide that,” Seamus O’Regan said during an announcement for hydrogen fuelling stations for heavy trucks in Alberta.

He pointed to the fact he was even talking about hydrogen as a source of transportation fuel as an example of the transformation in the energy sector. O’Regan also referred to a report from the International Energy Agency, stating that for global energy sectors to achieve net-zero emissions by 2050 — which Canada has pledged to do — there should be no new oil and gas developments approved.

The minister said he doesn’t fully agree because he sees a future with emissions-reducing technologies like carbon capture and storage, and knows energy companies are making improvements on their own.

“We are singularly focused on lower emissions,” he said.

Whether Canada needs another pipeline remains a controversial question.

Adding to that is the reality that Ottawa, as well as major nations like United States, are setting higher targets for slashing greenhouse gas emissions and pushing policies like the shift to electric vehicles in an effort to boost the fight against climate change.

Besides the now-dead Keystone XL, Canada’s other main pipeline projects are Trans Mountain and Line 3.

Last November, the Canada Energy Regulator suggested not all would be needed, if Canada keeps implementing more climate polices.

The Trudeau government paid $4.5 billion to Kinder Morgan Canada to buy the Trans Mountain pipeline to provide certainty that a planned expansion from Edmonton to Burnaby, B.C., would go ahead after court battles delayed construction.

Enbridge is also currently fighting in a Michigan court against state Gov. Gretchen Whitmer, who wants to shut down the long operating Canada-U.S. Line 5 pipeline over environmental concerns around the Great Lakes.

Tim McMillian, CEO and president of The Canadian Association of Petroleum Producers — among the stakeholders Ottawa talked to about Keystone XL’s cancellation — says for many Canadians, Line 5’s uncertainty underscores the need for a solid pipeline network that moves energy west and south, as well as east.

He believes more export capacity is needed because, over the next two decades, the International Energy Agency projects the global demand for gas will increase, as it will for oil until at least 2030 before flattening out closer to 2040.

“The global demand increase most certainly will be looking for supply. Is Canada the right place to be the supply or should we letting the other nine large (oil and gas producing countries) … be the ones that step in and offer that supply?” he said.

“I would hope that our federal government is believing that Canadian innovation, Canadian science, Canadian resources are the right answer for the future.”

This report by The Canadian Press was first published June 4, 2021