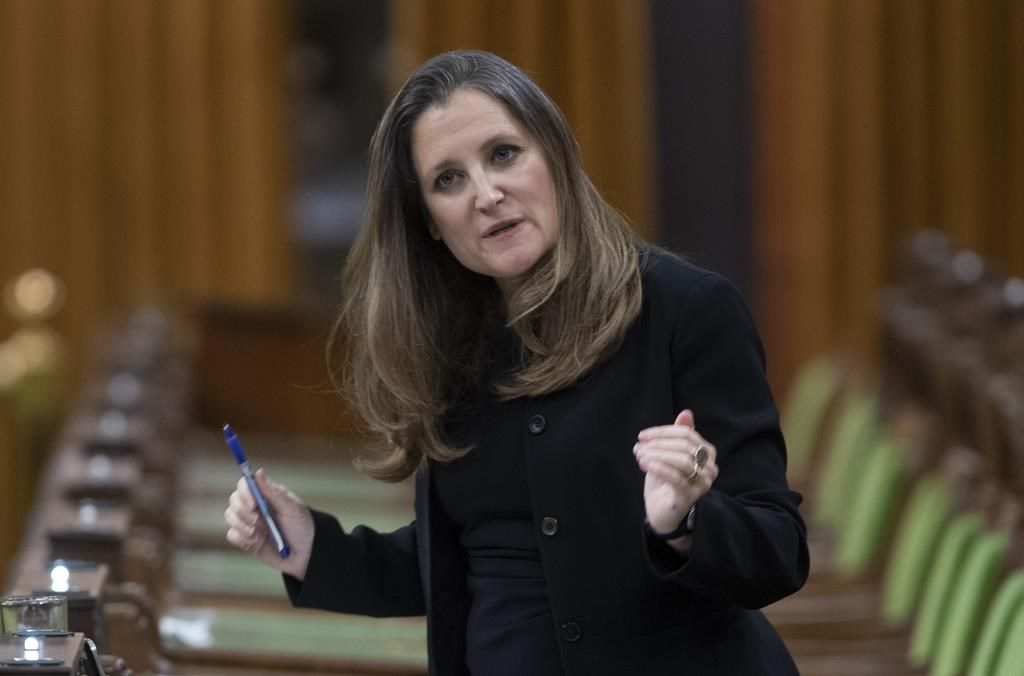 TORONTO â€” The federal budget’s new digital services tax on large corporations is a step forward as the government works toward a multilateral agreement it hopes to reach with other countries, Finance Minister Chrystia Freeland said Wednesday.

“The idea behind this tax is that we are very hopeful there will be international agreement around it, and that the Canadian provisions can dovetail,” Freeland said in a virtual conversation sponsored by the Canadian Chamber of Commerce.

Monday’s federal budget outlined plans to put a three-per-cent tax on revenues from digital services that rely on data and content contributions from Canadian users. It would take effect Jan. 1 of next year and is projected to raise $3.4 billion in tax revenue over five years.

The tax would apply to businesses with gross revenue of at least 750 million euros, or about C$1.125 billion.

The budget says that Canada has “a strong preference” for a multilateral approach and work is under way to reach an agreement by mid-2021.

In the meantime, Freeland said the budget’s digital service tax indicates that is “really just about applying a little bit of deadline pressure, and being clear that we’re going to move forward no matter what.”

Her fiscal economic update in December said that it planned to work on a digital tax with the OECD, a multilateral organization that includes the United States and other large economies.

But the idea of a tax on multinational corporations that make billions from digital services, such as internet search engines,  social media and streaming video, has been evolving for years.

During the presidency of Donald Trump, however, the United States opposed development of such a tax â€” which would apply to large U.S. technology corporations.

Freeland, who was Canada’s lead negotiator during tense talks leading to a new three-way trade deal with the United States and Mexico, said Wednesday that her optimism of reaching an OECD-sponsored multilateral deal “has increased a lot” since the election of President Joe Biden.

Earlier this month, Italy’s finance minister that Group of 20 advanced economies â€” which include Canada and the United States â€” hope to have reached an agreement on international taxation by a ministerial meeting in July.

That followed an April 5 speech by Biden’s treasury secretary, Janet Yellen, who said the U.S. would work with the Group of 20 to stop “a 30-year race to the bottom on corporate tax rates.”