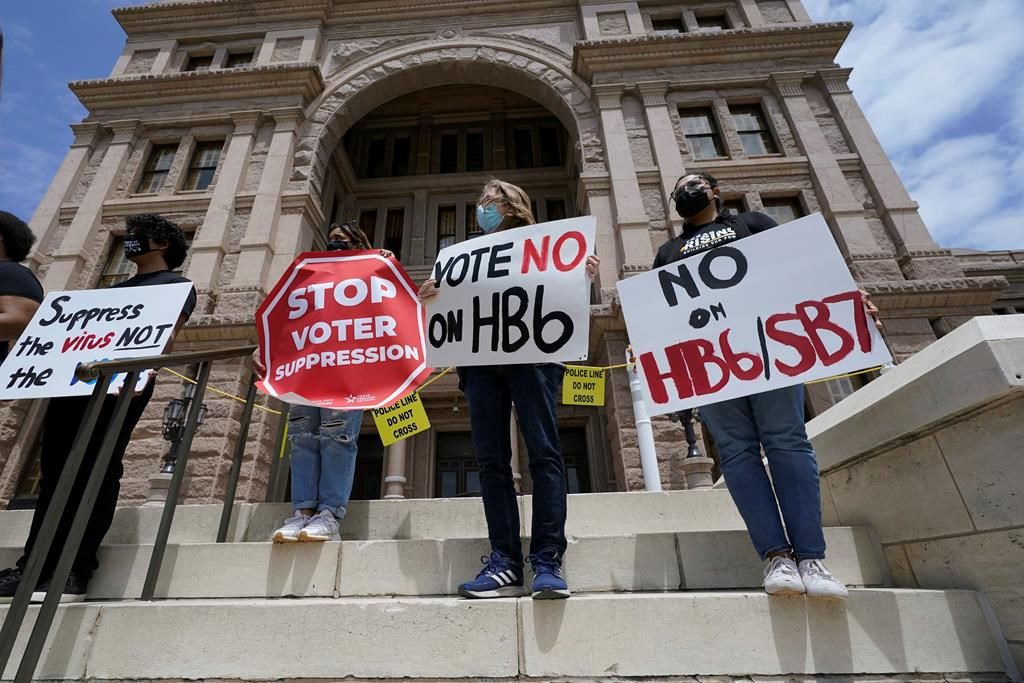 AUSTIN, Texas â€” Republican lawmakers around the country are pressing ahead with efforts to tighten voting laws, despite growing warnings from business leaders that the measures could harm democracy and the economic climate.

More than 50 Texas companies and business organizations on Tuesday released an open letter expressing opposition to "any changes" that would make it harder to vote in that state. The letter â€” signed by American Airlines, Microsoft Corp., HP Inc., Patagonia, Levi Strauss & Co. and others â€” comes ahead of votes on legislation that critics say would place disproportionate burdens on minority and disabled voters.

"We believe the right to vote is sacred. When more people participate in our democratic process, we will all prosper," the letter said. "The growth of free enterprise is directly related to the freedom of its citizens.”

The statement stopped short of stating opposition to the specific legislation proposed in Texas. Nonetheless, it amounts to a cautious rebuke of lawmakers using former President Donald Trump's false claims about a stolen election to make it harder to vote.

Texas is emerging as the next major battleground in the fight over voting laws. The Texas House could vote, as soon as this week, on a bill that effectively targets Harris County, home of Houston and a Democratic hub, after officials there dramatically expanded voting options in 2020 amid the coronavirus pandemic. The Texas Senate has advanced its own package, with the two chambers likely headed to a compromise committee that would fashion a final version.

Texas would follow other GOP-led states, including Georgia, Iowa and Florida, where GOP Gov. Ron DeSantis is expected to sign voting legislation passed last week. On Monday, Kansas’ Republican-led legislature overrode the Democratic governor’s veto to approve a voting law. Arizona is also considering legislation, and Republicans in Ohio are expected to introduce a package of proposals this week.

The details of the bills vary state to state but follow a similar pattern of making it harder for people to vote by mail or absentee. While voters of both parties have long used those methods to cast ballots, Democrats were more likely to vote remotely in 2020 â€” a fact that has spurred the GOP crackdown.

In Texas, one measure would eliminate drive-thru voting, which more than 127,000 people around Houston used during early voting last year. Some Democrats estimate that more than half of those voters were Black, Latino or Asian American. Republicans also want to grant partisan poll watchers wider latitude and make it a felony for an elections officer to send mail-voting applications to households that didn't request them, as Harris County tried to do during the pandemic.

Democrats have been pushing businesses to use their clout to influence the debate â€” although businesses have been divided over diving into the partisan battle. Statements issued by companies have done little so far to derail voting-related proposals and have opened up rifts between Republicans and their onetime corporate allies.

The Texas businesses, calling themselves Fair Elections Texas, used notably careful language in their statement, declaring that elections should be "convenient, transparent and secure," a nod to Republicans’ insistence that their agenda is about preventing fraud and shoring up voter confidence in election results.

At the same time, the group called on "all elected leaders" to "make democracy more accessible" and said they "oppose any changes that would restrict eligible voters’ access to the ballot."

Georgia became a national flashpoint over election procedures when it became the first state to adopt an overhaul. Among the key provisions, the state now will require voter identification to apply for and then cast absentee ballots, replacing a signature match program. Georgia officials also effectively limited ballot drop boxes in metro-area counties when compared with the 2020 numbers.

After the bill was signed, Georgia-based Delta Air Lines and The Coca-Cola Co. criticized the bill, angering Republicans. Gov. Brian Kemp, a Republican who faces reelection in 2022, has loudly blasted corporate America for yielding to "cancel culture.”

Corporate lobbying has been more muted in Arizona, where Republicans are pushing a slate of election bills. It remains to be seen whether their narrow statehouse majority will be enough to adopt significant changes.

Trump prevailed over Democrat Joe Biden in Texas and Florida, but Democrats have continued to narrow the partisan gap in Texas in recent cycles and Florida remains a battleground, spurring Republicans in both states to pursue new restrictions.

DeSantis, a Trump ally, is expected to sign a measure that would tighten voter ID requirements for absentee ballots. The business lobby in Florida, heavily influenced by the tourism industry, remained mostly mum, and some Republicans in the state noted that making it harder to cast absentee ballots could backfire since the practice is so well-established among older Floridians across the political spectrum.

The GOP effort even extends to states where Trump won by uncontested margins. In Kansas, Republicans this week overrode the veto of Gov. Laura Kelly, a Democrat, on a bill that would make it harder for individuals and groups to collect absentee ballots and deliver them for voters. It will now be a misdemeanour for someone to collect and return more than 10 ballots in Kansas, which Trump won by 15 percentage points.

In Ohio, where Trump won twice by nearly double digits, Republicans are set to unveil a package that will eliminate a day of early voting, increase voter ID requirements and prohibit placement of ballot drop boxes anywhere but at a local elections office. But Ohio Republicans argue they’re also including other provisions that bipartisan elections boards and voting rights groups have advocated.

Acacia Coronado is a corps member for the Associated Press/Report for America Statehouse News Initiative. Report for America is a non-profit national service program that places journalists in local newsrooms to report on undercovered issues.