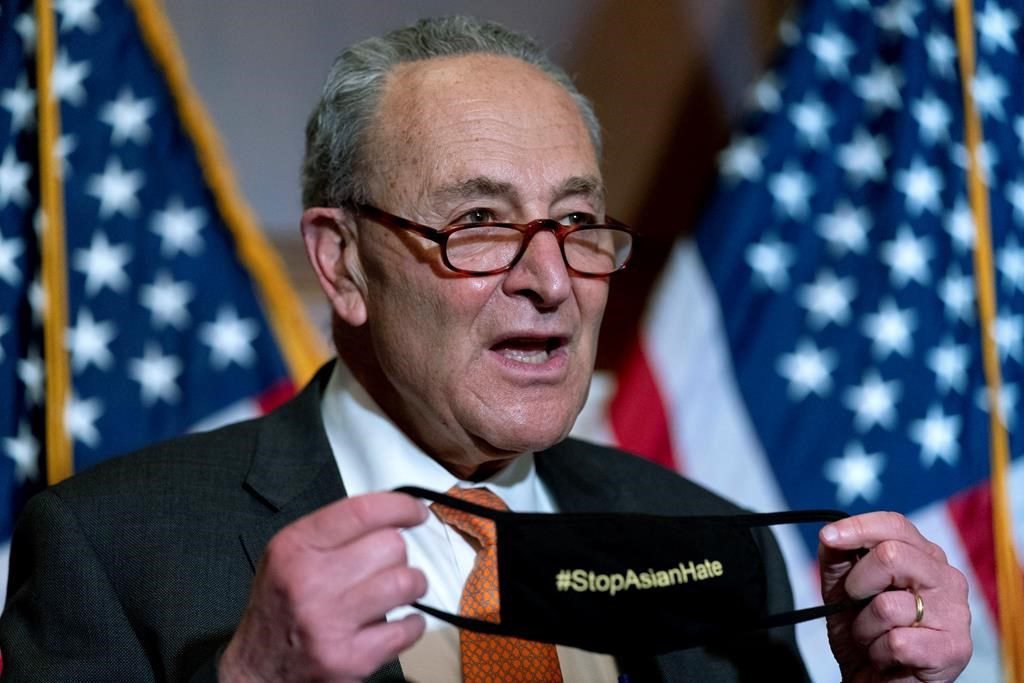 WASHINGTON â€” Democrats were on a roll. The House voted along party lines to make the nation's capital the 51st state and two hours later, the Senate overwhelmingly approved bipartisan legislation to address violence against Asian Americans.

Despite a minuscule majority, House Democrats have overcome Republican opposition and passed legislation this year reworking voting laws, toughening gun background checks and fulfilling other party goals. Yet in the 50-50 Senate, which Democrats control because of Vice-President Kamala Harris’ tiebreaking vote, bipartisan co-operation will be the only pathway to passage for many bills.

The Senate GOP’s superpower: filibusters, bill-killing delays that would force the chamber’s 50 Democrats to win votes from at least 10 Republicans to prevail. That gives Republicans tremendous power over much of Biden’s and Democrats’ agenda, and it’s fueling frustration among progressives who want senators to abolish the filibuster rule.

It would take all 50 Democratic senators â€” plus Harris â€” to abolish or curtail the filibuster, over the certain objection of the chamber’s 50 Republicans.

But moderate Sens. Joe Manchin, D-W.Va., and Kyrsten Sinema, D-Ariz., have opposed eliminating it, and Democrats say others in the party quietly oppose the move as well. Filibuster defenders say the threat of the tactic encourages the two parties to work together.

"The time has come to end these political games, and to usher a new era of bipartisanship,” Manchin wrote in a Washington Post opinion essay this month, a sentiment many Democrats consider naive.

Filibuster supporters also say Democrats would regret eliminating the rule once the GOP, inevitably at some point, returns to majority control. Democrats in past GOP-run Senates have used it to prevent Republicans from curtailing abortion rights and in other fights.

Significantly, Biden has already won the capstone of his first months’ agenda â€” the $1.9 trillion COVID-19 relief package, signed into law in March. In coming months, he stands a strong chance of achieving a second major triumph on his proposed $2.3 trillion infrastructure plan, which the White House says would create millions of jobs.

"The biggest pieces of Biden’s agenda, that he’s put the most political capital behind, already became law" or have a strong chance of that, said Matt Bennett, a top official with Third Way, a centrist Democratic group.

Democrats passed the virus relief bill over unanimous Republican opposition because they used special budget rules preventing GOP filibusters. They might resort to the same procedure for the infrastructure bill to prevail if, as seems strongly possible, they can’t reach compromise with Republicans.

But use of the procedure circumventing filibusters is strictly limited by Senate rules. Since January alone, that’s stymied Democratic initiatives beloved by the party’s core liberal voters, including bills easing voting restrictions, reviving portions of the Voting Rights Act, tightening gun restrictions and helping women win salaries equal to men’s pay. The bill granting statehood to the District of Columbia also faces no chance in the Senate.

Under pressure after this week’s conviction of a former Minneapolis police officer in the murder of George Floyd, a Black man, senators are trying to negotiate a compromise for overhauling police procedures. A House-passed bill would ban chokeholds, improve police training and end immunity of many police officers from lawsuits.

The roadblocks have prompted progressives like Bush to continue pressing Democratic senators to eliminate the filibuster. Some top Democrats have repeatedly dangled the threat of doing just that. Liberals hope pressure on Senate Democrats to end the rule will build as House-passed bills stack up in the chamber.

"This chamber can work in a bipartisan fashion to get things done," Senate Majority Leader Chuck Schumer, D-N.Y., said Thursday after it passed the bill taking modest steps to ease violence against Asian Americans and Pacific Islanders. "That doesn’t mean we forgo our principles. That doesn’t mean we cut back on the boldness that is needed. But it means we try to work with our Republican colleagues whenever we can.”

At a news conference last month, Biden advocated a return to an earlier filibuster version that forced objecting senators to speak on the Senate floor until one side or the other surrendered. He added that if a "complete lockdown" occurred, "we'll have to go beyond what I'm talking about."

House Speaker Nancy Pelosi, D-Calif., told reporters Thursday that "Mitch McConnell is still the problem.” She was referring to Democrats’ nemesis, the Senate minority leader from Kentucky, who exactly two years ago happily described himself as the “Grim Reaper" killing progressive bills in his chamber.

McConnell, however, isn’t to blame for all their Senate woes. Democrats currently lack 50 Senate votes for expanded gun background checks, raising the minimum wage and some other priorities, so eliminating the filibuster wouldn’t be enough.

"Rewriting the rules of American politics to exclusively benefit one side," McConnell said.

Looking ahead to 2022 elections when Republicans hope to win congressional control, the GOP House and Senate campaign committees are savoring using the issue.

"It’s going to become a standard question" for Democrats, said Chris Hartline, spokesperson for the National Republican Senatorial Committee. "They’ll have to say that they support getting rid of the filibuster, or they will face the ire of their liberal base” if they don’t.